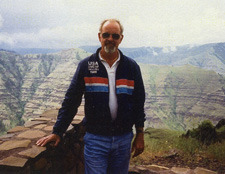 Carl "Berny" Wagner became a household name after he coached Dick Fosbury (of "Fosbury flop" fame) to a gold medal in the high jump at the 1968 Olympics. His nearly 50-year career coaching track and field at the high school and college levels and lifelong commitment to enriching the lives of young athletes earned him spots in local, state and national sports halls of fame.

After graduating from Palo Alto High School, Wagner studied briefly at Caltech before transferring to Stanford. His studies were interrupted by World War II, but he returned to the Farm after serving in the Navy and completed bachelor's and master's degrees in education.

He began coaching at Wheatland, Lodi, San Lorenzo and San Mateo high schools in Northern California. In 1965, he was appointed head track and cross-country coach at Oregon State University. During his 10-year tenure, he trained 25 NCAA Division I All-American athletes, including Fosbury. Wagner "molded men of strength and conviction—free of arrogance, confident of their skills and aware of their limitations," wrote former student-athlete Sam Rutland in a tribute.

Wagner coached two Olympic squads and led the 1975 U.S. Pan American Games team before joining the Whittaker Corp. to develop a track and field program in Saudi Arabia. Later, after returning to the United States, he used his position as executive director of the Track and Field Association USA to end a 22-year conflict between the NCAA and track and field's national governing body, the Amateur Athletic Union. Wagner spent his final years volunteering as an assistant coach for track teams in western Oregon and advocating for the reinstatement of the OSU men's track team, which had been eliminated years earlier due to budget cuts.

"Driven. Compassionate. Loyal. That's how I'll remember him," his son Jeffrey noted, adding that Wagner never let his demanding career overshadow his role as a loving husband and father.

Wagner was predeceased by his wife, Nancy, son Carl and a sister. In addition to his son Jeffrey, he is survived by his daughter, Erica Woodcock, and five grandchildren.

Dania Marinshaw, '14, is a Stanford intern.