A funny thing happened on the way to his PhD. 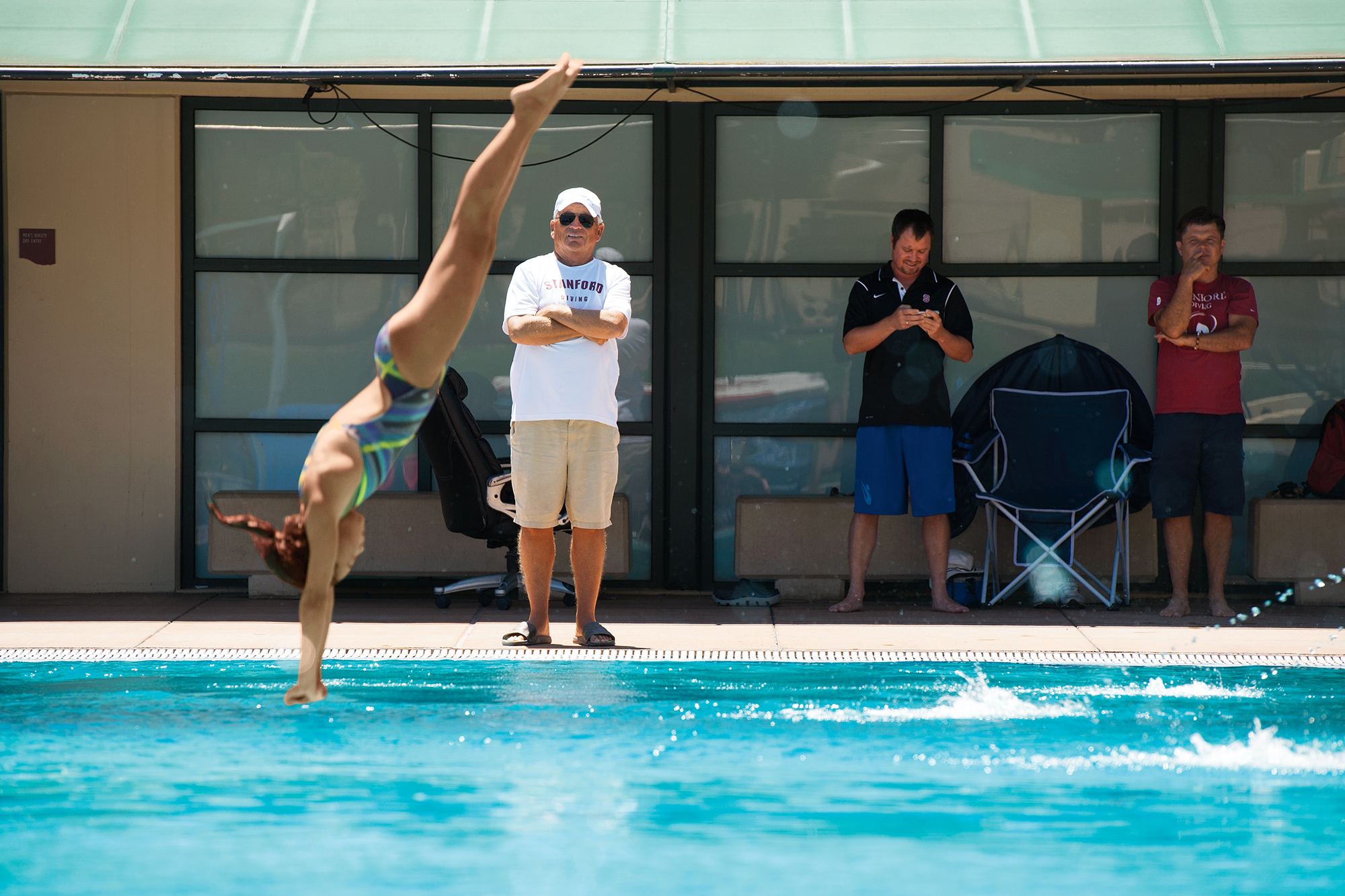 It's been decades since anyone questioned Stanford diving coach Rick Schavone's bona fides. The reigning four-time NCAA coach of the year, Schavone long ago established himself among the nation's elite instructors, leading Stanford to 11 individual national championships, two this spring.

But at the Olympics last summer, his fellow Team USA coaches weren't above a little ribbing about the one hole in his resume: The master teacher never dived himself. "They'd say, 'Why don't you demonstrate?' " Schavone recalls with a smile.

Four decades into his diving career, Schavone's experience on the business end of a springboard isn't much more advanced than the average fan's. And the only times Schavone, PhD '79, plunged from the three-story platform that towers over Avery Aquatic Center, he wisely went feet first.

But who needs firsthand experience, when you have an innate ability to see order in the blur of athletic explosion? "When you see a dive, it's fast. When I see a dive, it's in slow motion," says Schavone, who makes scant use of video to break down dives. "For some reason, I always had the eye."

Growing up outside Boston—a heritage still strong in his voice—Schavone's intuition for deducing physical mechanics helped him thrive in football, basketball and baseball, his best sport. "I remember a scout from the Dodgers once said to me in high school that I could make the pivot at second like a Major Leaguer."

Perfect form, though, couldn't hide "Punch-and-Judy" hitting and plodding foot speed, he says. Despite flirting with pro ball, his baseball days ended after the University of New Hampshire, where he also played basketball.

Diving only came onto his radar when he applied for a summer job as a recreation supervisor at a public beach. The position called for someone who could teach diving from the dock, a skill Schavone was cocky enough to claim. "I bought a book, walked out on the dock, grabbed some kids and tried to teach them, reading from a book in one hand."

He was a quick study, enjoying success coaching in subsequent summers and as a grad student. But when he arrived at Stanford, he planned to give it up. "I said, 'That's enough; I don't even know this sport; I never did this sport; I am going to just get my PhD and become a professor.' "

Instead, he taught recreational tennis classes but found it boring. Looking for a challenge, he walked into the aquatic center, introduced himself to the diving coach, and volunteered his services.

The coach saw a bigger opportunity. With the passage of Title IX, he suddenly had a women's program he was happy to unload. "I automatically became the head women's coach at Stanford University by walking out on the deck," Schavone says.

Three years later, he became head coach of both programs. After a brief hiatus at Princeton, he returned to the Farm. By 1982, Jean Meyer Galey, '85, became the first of 103 All-American selections under his tenure.

In the early days, rival coaches questioned a non-diver's ability to teach such a technical sport, Schavone says. Galey recalls potential recruits wondering why she'd selected Stanford. But with each success, the doubts faded.

Olympian diver and two-time NCAA champion Cassidy Krug, '07, the daughter of a diving coach, says she didn't realize Schavone hadn't dived until after she arrived. If anything, she says, the lack of experience pushed him to perfect his coaching, rather than rely on what worked for him. "I think Rick is the best technical coach in the country."

Schavone still feels the thrill of finding ways to make divers better. But at 64, he can't promise he'll stay beyond 2016. Still, he felt a resurgence after coaching Krug and three-time NCAA champion Kristian Ipsen, '15, at the London Games where Ipsen won a bronze medal.

The experience was magical, he says, not just because of the diving. A devotee of musicals who has seen Les Miserables 35 times, Schavone relished slipping away evenings to the West End. But it was the level of the competition that blew him away, he says, recalling top athletes like the gold-medalist in the 3-meter springboard.

"I could sit there all day long and just watch her dive. "I love greatness. And that's what I finally saw. I saw greatness there."