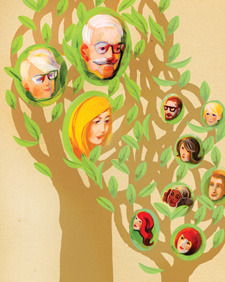 It was the sort of 3 a.m. phone call all of us in our mid-40s dread. My mom, Judy Shafer Dodge, '58, was crying on the phone. "Your dad is nonresponsive. The doctors aren't sure if they can bring him back."

Instead of booking a flight alone to reach her in San Jose, I had the company of Donner. We dormmates of 1984-85, class of '88, were in Las Vegas celebrating our 45th birthdays. Bonnie Gutierrez, half asleep, helped me pack and got me to the airport. Kathleen Kenny, an assistant professor of medicine at Stanford, where my dad, Frank, was in the intensive care unit, called the hospital to pepper the nurses and interns with questions and then reassured me. Later that day, more friends called and texted me. Others prayed. He knew and loved them—the sisters I never had.

Perhaps because I was an only child and only grandchild, I had thrown myself with abandon into my Stanford-assembled Donner family as a freshman. I brought my new family to meet my real family many times that year, whether to my parents' home in San Francisco or my grandmother's condo in Menlo Park.

On campus in those days, we thought that Donner was some sort of housing office/Dean Fred joke. Why put John Brooks and John Brooke down the hall from each other, and assign Christopher A. Martinez and Christopher J. Martinez to the same dorm? Among 100 residents, we had three women from the same private high school in Marin County and three men from the same Catholic high school in Portland, Ore. We had the guy who threw a burning couch off a fraternity balcony, an engineer who retired before 30, a 7-footer and an RF named Michael Jackson. Our friendships—some likely, some not—have lasted 25 years.

But until my father died, two weeks after that 3 a.m. call, I had not understood that he had embraced Donner as much as I had. He talked often with former Navy pilot Scott Bedgood, and my mother reported that his phone conversations with Mike DePaoli involved such heated political parrying that she'd leave the room. Both men sent their heartfelt condolences. Many Donnerites, including Don Hogue, who drove two hours, attended my dad's "celebration service" and the next day's football game between Stanford and Dad's alma mater, San Jose State. Stacy Hoover and Alison McGann went way out of their way to help my mom out when I returned home to Los Angeles.

Donner had rallied in this fashion earlier—when classmate Drew Erickson died from a brain tumor in his 20s, again when we lost Dave Blackburn and Jen Pokluda, and when John Brooke died of cancer before age 45. Our friendships are easily renewed as time passes, whether at a memorial service, Reunion Homecoming or on Facebook, where we continue to share our varied lives.

So thanks, housing office. Thanks for a smart, beautiful roommate, for two floors of men and one of women, for so many tears and for so, so many laughs. Friends are the family we choose, and I am grateful the women of Donner chose me, too.