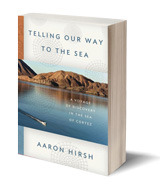 Telling Our Way to the Sea: A Voyage of Discovery in the Sea of Cortez, AARON HIRSH, PhD '04; Farrar, Straus and Giroux, $30.

For many summers, Hirsh, his wife and a few academic colleagues led Stanford students on biology field trips in Baja California. In this composite memoir, Hirsh combines superb storytelling—a half-terrifying, half-ecstatic encounter with a whale; an approaching hurricane that nearly scuttles everything—with a clearheaded yet often lyrical account of the scientific speculations, observations and revelations that struck students and instructors alike. Just as engaging is his frank, quasi-literary portrayal of the different personalities involved (the oddball professor, the know-it-all undergrad) and the sometimes infuriating, sometimes heartwarming group dynamics that framed the learning experience.

Anna Starling flees a crumbled marriage in California for a seaside cottage on Cape Breton Island, Nova Scotia, and finds some equilibrium and a new love, grizzled local Red Murdock. When a strange package washes up on the beach, Anna's small, quiet world receives a dose of drama. MacDonald, a lecturer emeritus at Stanford, captures the cadence of a weathered Maritime outpost and its rustic remnants, human and otherwise, in this atmospheric novel.

This is a poignant portrayal of the existential challenges young Mormons face in their two-year missions. For Elder McLeod, an American increasingly chafing under the church's rules, and Elder Passos, his assigned companion who goes by the book, 24/7 togetherness is even more frustrating than the slammed doors and cultural clashes they meet in the streets of Carinha, Brazil. The progress of their relationship—and of that with their only prospective convert—is a heartbreaking story of good intentions gone wrong. The author, a 2009-2011 Stegner fellow, was raised a Mormon and left the church in his 20s.

From the Bible to Baudelaire to Bono, swear words are "the most powerful words we have to express emotion, whether that emotion is negative or positive," posits Mohr, who has a doctorate in Renaissance literature. In this engaging and authoritative survey she draws on cultural artifacts, low and high—graffiti, epigrams, dictionaries and literary works—to chart the shifting taboos that have throughout history imbued certain words with the potential to shock and offend.

Multilingual Hanne Schubert has just finished translating a Japanese novel into English when a freak brain injury from a fall leaves her unable to speak—except in Japanese. Frustrated trying to function in San Francisco, she accepts a speaking engagement in Tokyo, only to be publicly denounced by the Japanese author she translated. He accuses her of grossly distorting his protagonist, whom he based on a well-known theatrical performer. Schubert seeks out the actor and slowly realizes that just as she molded his alter ego to fit her ideals, she's done the same wrong to her own daughter. The outcome is bittersweet.

The author acknowledges that he didn't intend to write a spiritual autobiography; some chapters were essays published separately. Yet in the wake of 9/11, Rodriguez grew preoccupied with the idea that the "desert God" of his Roman Catholic religion made him kin to Jews and Muslims. That led him to explorations in Jerusalem and beyond. Desert imagery—death, isolation, timelessness—ties these memoirs together, from his visit to a dying friend in Las Vegas to a lament over the demise of San Francisco newspapers. Deserts also create an urge for oases, be they the tinsel of Hollywood or, clearly for Rodriguez, his abiding faith.

'When you said a quake would happen soon, can you be more specific?' The expression on Vi's face was still calm and open as she said, nodding, 'The date I'm getting is October sixteenth.' From Curtis Sittenfeld, '97, in Sisterland, Random House, $27.