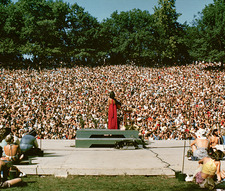 WAS THIS IN THE ADMISSIONS BROCHURE?: Joan Baez, a warm afternoon and 10,000 of your closest friends. Photo: Laurence G. Kay.

WAS THIS IN THE ADMISSIONS BROCHURE?: Joan Baez, a warm afternoon and 10,000 of your closest friends. Photo: Laurence G. Kay.

Frost Amphitheater is a dowager now, a Depression baby who matured into a warm and lovely adulthood, a beauty who in middle age throbbed and hummed to the beat of a nation. The music has receded into memory, enshrined by ticket stubs taped in scrapbooks and photos scanned onto Facebook. From the late 1960s, when San Francisco music served as the soundtrack of a generation, well into the 1980s, when the Grateful Dead made an annual pilgrimage, Frost embraced rock 'n' roll.

"I guess I always think about these warm, sunny afternoons, this big, green bowl of people dancing around," says Michael Parrish, dean of the College of Sciences at San Jose State and a historian of Bay Area rock music.

"Frost," Brian Becker, '79, recalls, "was a magical place." Becker organized concerts for ASSU as an undergrad and has spent his adult career in live entertainment, promoting for some of the top companies in the industry. "We developed amphitheaters around the country. They all had great acoustics, layouts." But none, he says, had Frost's special qualities: "the bandshell, the nature; a beautiful, magical place." 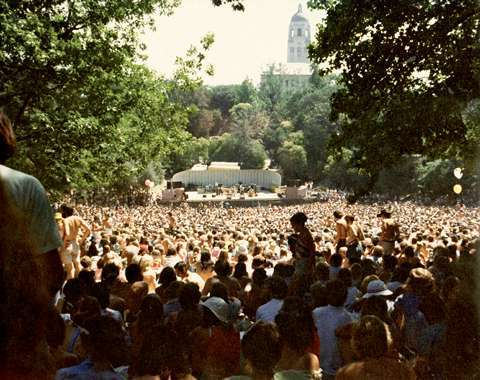 The beauty came at birth. After their son John Laurence Frost, '35, died of polio only a few months after graduation, Mr. and Mrs. Howard Frost donated $90,000 ($1.45 million in today's dollars) to build a memorial. The Laurence Frost Amphitheater sits on 20 acres roughly halfway between the Main Quad and Stanford Stadium.

The 150 varieties of trees planted on site bathe it in shade and camouflage it from the hubbub of campus life that surrounds it. The latter job has been performed too well. Frost now sits quiet and mostly forgotten, flora transformed by time into fauna. The Amphitheater is a white elephant.

Before the rock era, Frost was known mostly as a venue for commencements and major speakers. Music leaned toward jazz and classical pops. Arthur Fiedler conducted the San Francisco Symphony in an annual summer fundraiser for the Children's Health Council. (Those fundraisers continue to this day.) Duke Ellington and Ella Fitzgerald played there, as did Louis Armstrong. With the rise of rock music in the Bay Area, however, brassy horns and sultry torch songs gave way to guitars and psychedelia. For more than a decade beginning in the late '60s, Frost played host to some of the most popular rock artists in the world. 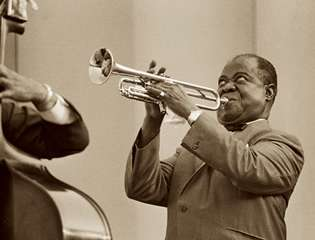 Jefferson Airplane played there on May 7, 1967 just as the San Francisco group approached national stardom. The single "Somebody to Love," which rose to No. 5 on the Billboard chart, had been released a month earlier. The concert took place four months after the Human Be-In at Golden Gate Park, the gathering of some 30,000 where Timothy Leary famously urged people to tune in, turn on and drop out. It was a prelude to what became known as the Summer of Love, when young people from across the nation crowded into San Francisco and embraced a hippie counterculture. Jefferson Airplane, which headlined a star-studded lineup at the Monterey Pop Festival a month after appearing at Stanford, helped provide the musical backdrop during that seminal summer.

However, their Stanford performance left a student reviewer at the Daily underwhelmed. "This is the Jefferson Airplane," a caption beneath a photo of the band read. "They make music, sometimes. They also make commercials for white Levi's. They played at Frost Amphitheater on Sunday. They stank."

Jefferson Airplane went on to the Rock and Roll Hall of Fame. The reviewer remains anonymous. 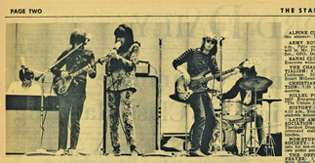 Jefferson Airplane, in a concert the Daily panned. (Photo: Courtesy the Stanford Daily)

The first concert that Parrish, 57, attended at Frost was emblematic of how accessible and inexpensive live music was at the time. The headliners of that July 1968 show (tickets were $4) were The Chambers Brothers—whose hit "Time Has Come Today" became a classic from the era—and Quicksilver Messenger Service. Opening acts included two little-known groups, the Santana Blues Band (yes, that Santana) and Creedence Clearwater Revival. Santana had yet to record an album and CCR had released their first LP weeks earlier.

"Creedence was the second act that came on. They got just huge within a year or two, as did Santana, after their performance at Woodstock," Parrish recalls.

For children growing up near Stanford, Frost became a sacred playground. Danny Scher, '73, MBA '75, and his friends used to hang out there. "You could ride your bike down the sides," Scher says. "We used to ride them down the steps—bumpbumpbump. You'd end up where the stage is now. There was not a stage, so to speak, where the performers were. Then they eventually built kind of a concrete platform stage so you couldn't really ride your bike on the stage anymore."

As Scher grew older, he succumbed to Frost's other charms, including jazz concerts where he went backstage and got autographs. During his undergraduate years, he attended a few shows but missed Tower of Power, which appeared regularly, and the legendary Jimi Hendrix. Actually, everyone missed Hendrix. Though tickets were sold, the show was cancelled.

In July 1971, during a show featuring Elvin Bishop and a group called Cold Blood, a melee erupted among concertgoers, a motorcycle gang and police. Bottles were thrown. Patrons were bloodied. The University suspended rock concerts at Frost.

A subcommittee of the University Committee on Public Events studied the issue and concluded that rock concerts begat violence, drug abuse, robbery and other evils your parents warned you about. In the fall of 1972, after security faltered at a Frost concert featuring jazz icon Miles Davis and people streamed in without paying, the University banned all concerts, period.

"That was at the height of Vietnam," says Scher, a senior that fall. "There was a lot of anxiety on campus."

Scher saw an opportunity. A hustler from way back, he decided to pay his own way through the Graduate School of Business (tuition: $2,805). The ASSU asked him to promote concerts on a campus that had outlawed them. Scher met with President Richard Lyman, and encouraged him to relax restrictions if Scher promised to take care of the security problems. Lyman said he would give Scher one chance.

"I used to sneak into all these concerts when I was in high school," Scher says. "The first thing I did when I got the job was to seal all the holes under the fence. It was just a regular 5- or 6-foot high chain-link fence. All the kids knew where the holes were."

Hoping to avoid the altercations that had marred earlier Frost shows, Scher hired jugglers, tap dancers and street performers to entertain people while they stood in line and, once they settled into the amphitheater, before the show. He approached Tom Dallas, who with his wife, Mary, sold fruit for years in White Plaza, and asked them to sell fruit at the concert.

According to Scher, Dallas asked, "'How much you gonna charge me?' I thought, I couldn't really charge this guy." After agreeing to give it a try, Dallas made enough profit in that first concert to convince him to come again, and he soon became a fixture at Frost.

Baez sold 10,000 tickets at $2.50 per. More important, the concert came off without a punch or bottle thrown. The University allowed the ASSU to begin booking acts again.

Scher stayed on the "white wine" end of the spectrum, bringing in soft-rock acts that seemed most suitable for a Stanford audience. "I don't want to be disparaging," he says, laughter in his voice. "I mean, Stanford wasn't Berkeley in those days."

He booked Loggins and Messina, America, Baez again, and Seals & Crofts, who soon left the music world behind for their Baha'i faith. "As part of the contract, when the show ended, they would come back on stage and give a Baha'i talk," Scher recalls.

Scher did so well bringing acts to Frost (and Maples Pavilion and Mem Aud and Dinkelspiel) that he caught the eye of San Francisco rock impresario Bill Graham. Scher worked for Graham for 24 years.

"I love Stanford, in that they let me kind of do my thing and they let me do it until I showed them I couldn't do it," Scher says. "I think of Stanford as a very liberal institution that way."

Brian Becker ran concerts for ASSU in 1978-79 and recalls the beginning of the end for Frost as a rock venue. The ASSU began to turn toward jazz. The show Becker thinks of to this day is the one that got away: "George Benson performing in front of a symphony orchestra," he says. "You know how big Benson was. We had it booked, ready to go. At the last minute, the head of ASSU decided he did not want us doing business with Bill Graham Presents. The objection was a general feeling that Stanford should promote on its own. We shouldn't allow concert promoters on campus."

Perhaps the group remembered most, and most fondly, is The Grateful Dead, which performed more than a dozen times over a span of 20 years. The Dead, which had its roots in Palo Alto, first played on campus in 1966 on the back deck of Tresidder. A show at Maples in 1973 is remembered as the debut of "the wall of sound," produced by a massive number of speakers that framed the musicians. Later that spring, they were at Frost, and James Armstrong, a senior at the time, was there. "I saw them every time they played in the Bay Area, but the best place of all to see them was Frost," he says. "A lot of Dead songs would go into a long jam in the middle, wandering jazz-like for a long time. Then, all of a sudden, they would catch fire. We all got Orphic thrills and our hair stood on end. From the stage all the way up the slope of Frost, in the spring sun, there would be a unanimous, audible 'aaahh.'"

From 1982 through 1987, the Dead came to Frost every year. "Always a fun and wild scene," Russ Dugoni, an East Bay resident who grew up during the late '60s near Stanford, said via email. "Some kids would climb the trees inside Frost to watch the band. The venue was packed . . . always sold out for the Dead! I do recall when Jerry sang [Bob] Dylan's 'It's all Over Now, Baby Blue,' you could hear a pin drop." 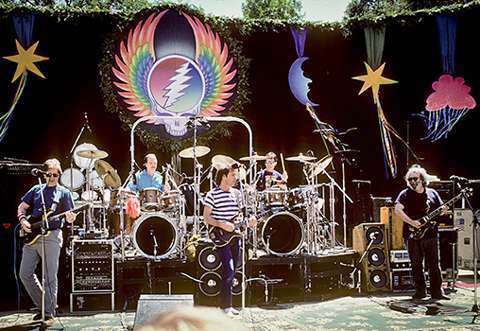 ARE YOU GRATEFUL?: The Dead, in one of their last shows at Frost, in May 1987. The band played on campus more than a dozen times over a 20-year span. (Photo: Bob Minkin)

A quarter-century later, you can still hear pins drop at Frost. With the exception of a rare summertime concert, the venue sits empty and silent. Security issues led to a fence being erected several years ago, and costs to mount a show have become prohibitive, officials say. The wiring is outdated. Everything that a modern concert needs must be brought to Frost on a truck.

There is talk among alumni of a certain age about raising money to revivify the old arena, maybe even creating an endowment that would generate an operating budget. The memory of dancing to live rock on a sun-kissed afternoon with nothing but blue sky above you exerts a powerful pull.

A proposal, and a plan, for a second campus.