We’re eager to reenter regular, post-pandemic life. Then again, we’re scared to. Here’s how to put the risks into perspective. 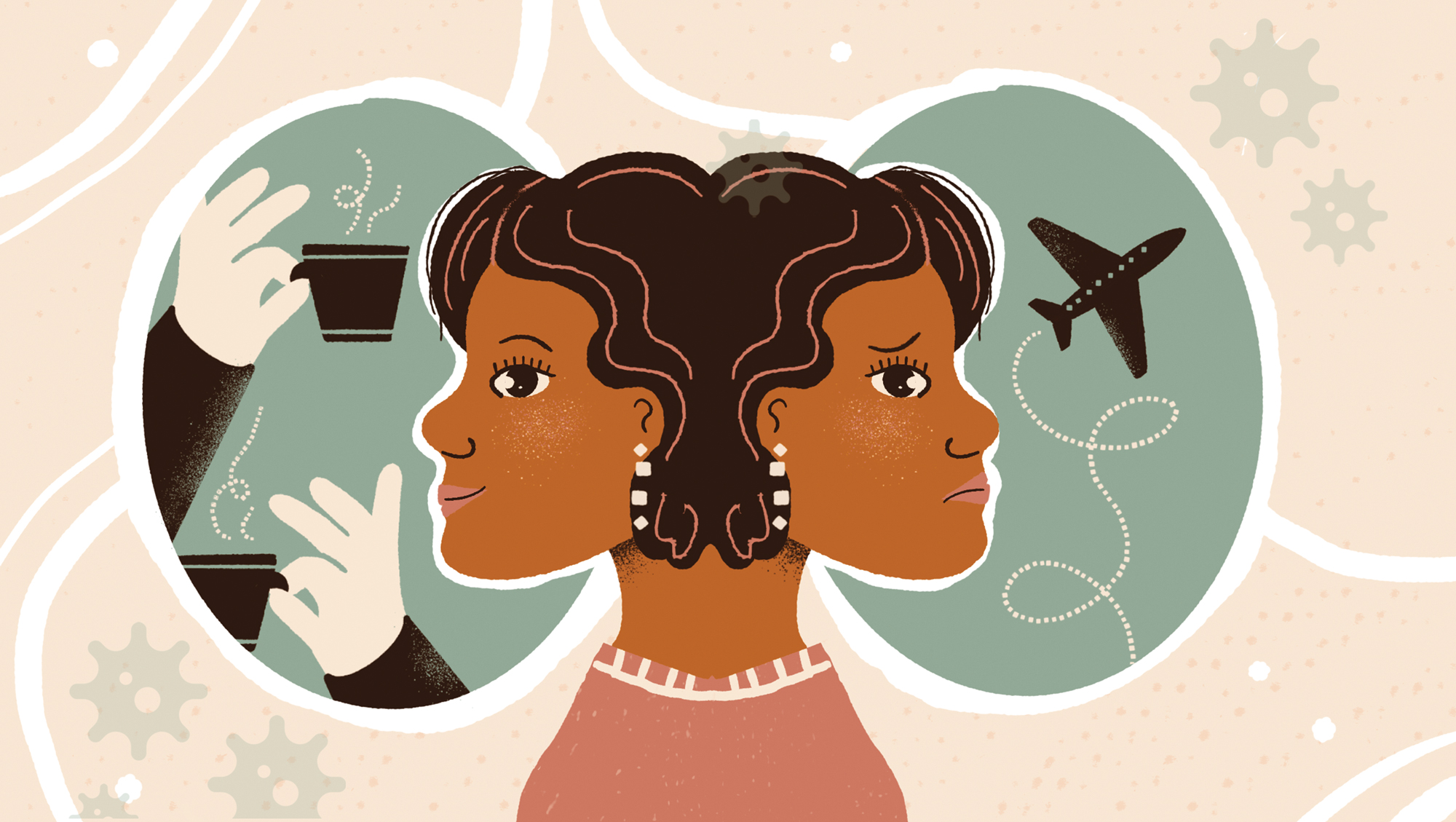 As adults and older teens are receiving COVID-19 vaccinations, opportunities to travel and socialize (possibly indoors!) are expanding. But the toll the pandemic has taken on our collective mental health won’t simply disappear after a shot (or two) of vaccine, experts say, and may affect how you feel about resuming “normal” activities or being in proximity to other people—even if you’re simultaneously impatient to get back out there.

“We’ve essentially been in training for a phobia,” says David Spiegel, associate chair of psychiatry and behavioral sciences at the Stanford School of Medicine and director of the Stanford Center on Stress and Health. Spending a year away from people and places for fear of contracting a deadly disease, he says, is like a how-to manual for acquiring an extreme fear. “When people start avoiding something, they then associate it as something dangerous or stressful. And the more they avoid it, the more anxious they get about it.” Some of us have been more isolated than others, but as ordinary activities resume, any number of us may find ourselves feeling uncomfortable. “It’s not entirely irrational by any means, but we now associate going outside, eating in a restaurant or getting on an airplane with danger.”

‘We can expect that people will remain anxious in a hypervigilant way for quite some time.’

We’ve also become more attuned to the threat of infection, says psychologist Emma Seppälä, PhD ’09, science director of the Center for Compassion and Altruism Research and Education, who compares our resulting hypervigilance—trying not to touch the gas pump handle or cringing at the sound of a cough—to the way former service members remain on high alert after they’ve left the military, even in the absence of trauma. “I know many veterans who still locate exits whenever they enter a building or are keen observers of their environments for signs of danger. We can expect that people will remain anxious in a hypervigilant way for quite some time.”

Which is why, even as you feel relieved and excited to socialize, you may also hesitate to be in groups or struggle to determine what’s safe. Here are four tips from Stanford psychologists for easing reentry anxiety and bolstering your mental health.

Treatment for phobias usually involves carefully programmed exposures, says Spiegel, so that you accumulate positive experiences with or around the source of anxiety. Even if your symptoms don’t meet the clinical definition of a phobia, gradual reentry isn’t a bad idea.

“I just advise people to recognize that we’ve suffered huge changes and reverses in our lives. Even as things get better, it’s going to take a while [to get] back into something that’s more of a semblance of normal life,” says Spiegel. “Slide back into it in ways that are consistent with good health care and public health measures, and to the extent that you’re able, take it at a pace that you’re reasonably comfortable with. And don’t expect to be completely comfortable, because you can’t be.”

Gradual transitions, like schools returning in a hybrid model (some days of in-person learning, other days remote), may feel easier since they allow kids—and adults—to dip a toe into the water rather than taking a plunge. But regardless of whether the pace of reentry is up to you, says Spiegel, remember that “more worry does not equal more safety.”

Safety protocols are relaxing, but you may find your brain is not. How long will the vaccines protect against infection? How well will they work against emerging variants? Is it safe to have a family reunion before all the kids have been vaccinated? Too often, the answer is we still don’t know.

Not knowing doesn’t sit well with most people, says Sarah Adler, a clinical associate professor of psychiatry and behavioral sciences, because our brains are hardwired to want information when we’re under stress. “When we’re hyperaroused, we’re in prime learning mode. That’s actually how memory works—that’s how we learn not to step in front of cars or to not do dangerous things.”

When you’re facing a threat, says Adler, your brain forces you to think in black and white. “That’s what our fear instinct is for,” she says. “It’s to push us in one direction or another.” This works great for urgent decision-making (such as what to do when you’re in the path of oncoming traffic), but it’s less helpful when you’re trying to decide whether it’s safe to go to trivia night. “When we’re under stress, it forces us into those binaries instead of allowing us to really sit in the gray and make decisions based on the actual probability or the actual data, or think through what is the risk and can we mitigate that risk in a balanced way, rather than just making all-or-nothing decisions.”

So when you’re lying awake at 2 a.m. thinking about whether it’s safe to go to that barbecue (Which should be outside, right? But people will take masks off to eat. And is your bestie vaccinated yet? Because she is definitely going to hug you—gah!), go easy on your poor brain. It’s trying to gather data. When there are lots of unknowns, simply telling yourself that there’s no more information to be had can reduce the amount of anxiety you’re feeling, says Adler. “And, yes, it will come back when the next threat perception appears, but sitting in that gray area can help reduce the effects of that constant physiological arousal.” Which may allow you to embrace—or at least tolerate—the space between safe and unsafe, and come up with a plan that works for you.

Meeting with people remotely does help. “Is it exactly the same neurochemically as being in the room together? Definitely not,” says Adler. “But it isn’t nothing.”

People who feel connected to others have lower rates of anxiety and depression, higher self-esteem and many other markers of mental health, says Adler. There’s no objective clinical definition or threshold in the research for what counts as connection, she says—if you feel it, it counts. “It’s actually your subjective sense of feeling connected to others rather than any sort of reality of being connected to others. If you’ve ever felt really lonely in a crowd or a group of your friends, you [know that you] can feel disconnected or connected regardless of how many people are actually around you.” So even as you start seeing some loved ones in person, remember that you can still keep up those virtual check-ins with the rest of your crew.

Three times more positive things than negative things happen to us every day, says Seppälä. But our well-documented negativity bias means we focus more on the bad stuff. And in a year filled with trauma and loss, who can blame us? Still, it can help to simply notice when your perspective is negative, she says. Then try to take note of a positive thing.

In many ways, says Seppälä, the pandemic year has set us up for a greater experience of gratitude. “We are going to avoid taking our loved ones and friends for granted when we see them. We will appreciate them more.” And each new freedom we gain as restrictions ease, she says, “will make us much more appreciative of things we formerly took as a given.”

Charity Ferreira is a contributing editor for Stanford. Email her at stanford.magazine@stanford.edu.