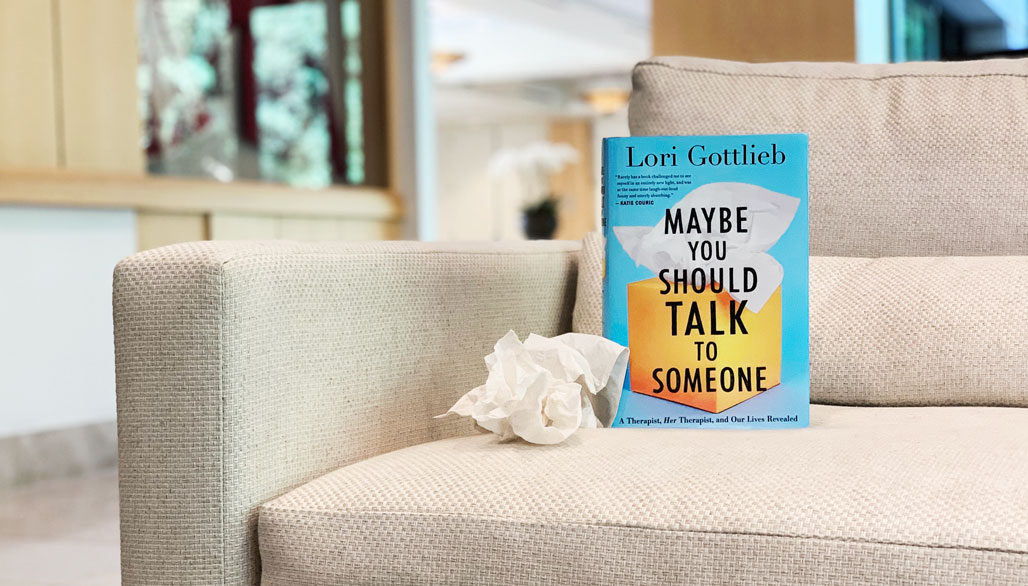 "Of all my credentials as a therapist, the most significant is that I am a card-carrying member of the human race,” writes Lori Gottlieb, ’89, in Maybe You Should Talk to Someone: A Therapist, Her Therapist, and Our Lives Revealed (Houghton Mifflin Harcourt). She delivers her story from two points of view—as a psychotherapist working with patients and as a patient going through the rigors of therapy.

Foundering after her fiancé abruptly ends their engagement, Gottlieb begins her search for a therapist—specifically a male therapist who is married and has children. She chooses Wendell, thinking that his familial status means he’ll be inclined to agree that her ex is simply an unethical jerk and a sociopath. She tries to convince herself that she just needs the tools to get past the breakup so she can move on. But there are underlying issues at play, and she knows it. She just can’t access them without help.

She devotes equal scrutiny to the journeys of her patients. There’s a self-absorbed Hollywood producer who is wracked with guilt, a young newlywed dying of cancer, a 69-year-old who has vowed to “end it all if nothing improved by her 70th birthday” and a 20-something who repeatedly makes disastrous choices in her love life.

Sometimes in order to feel better, you need a mirror held up to you, and not the mirror that makes you look pretty, like the one I was looking in now.

The process of psychotherapy has rarely been so thoroughly deconstructed. Gottlieb presents psychotherapy as a creative process: “We take the essence of the initial snapshot and the essence of the imagined snapshot and smash them together to create an entirely new one,” she says. “I have this in mind each time I meet a new patient.” Gottlieb alternately resists and embraces changing her own snapshot, as she stumbles through heartbreak, self-sabotage, avoidance and denial on her way to acceptance. When she develops an irrational crush on Wendell, she recognizes it for what it is: transference, which, along with its converse, countertransference, comprises the discomfiting emotional reactions that can arise between patients and their therapists.

Gottlieb tells these stories with honesty and wit, and without shying away from her foibles. Ultimately, through such frank disclosures of her own vulnerabilities, she lays bare the roots of a timeless and universal human quest: to achieve validity, inner reconciliation and meaning in one’s own life.

Shaili Jain is a Stanford-affiliated psychiatrist who specializes in treating post-traumatic stress disorder. Her book, The Unspeakable Mind: Stories of Trauma and Healing from the Frontlines of PTSD Science, was published in May.