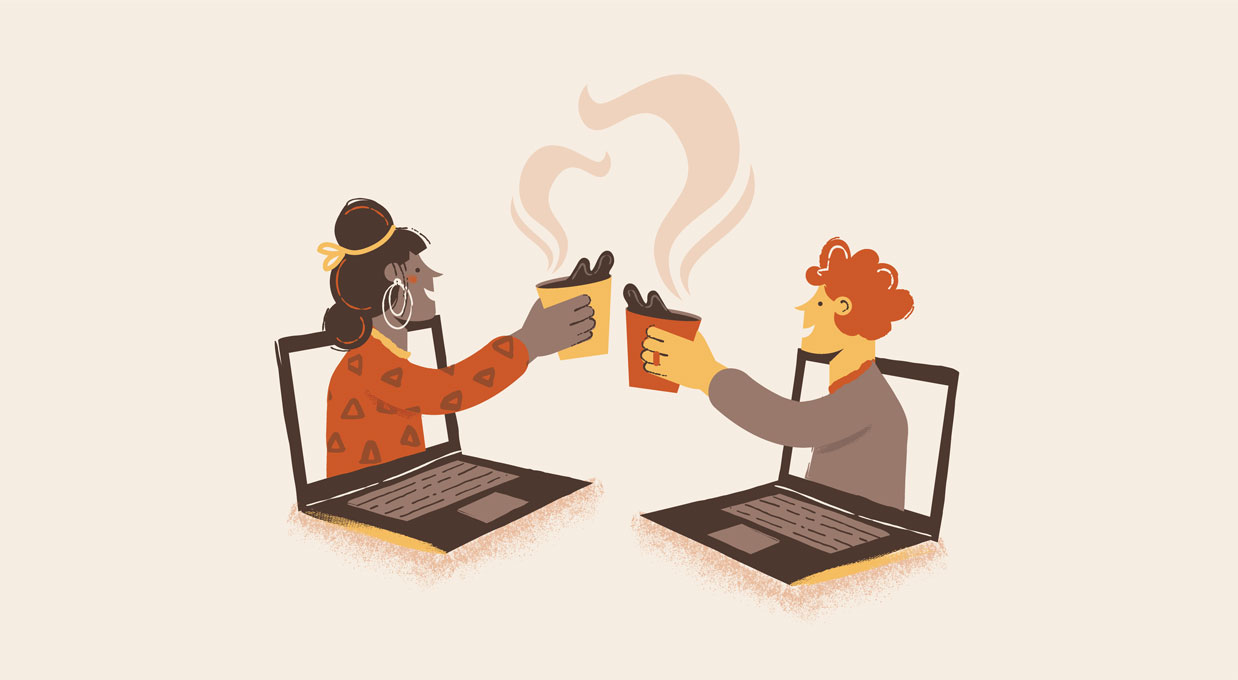 Starting a new job can be nerve-racking in normal times, and it scarcely needs to be said that these are not normal times. If you’ve landed a position with a company whose employees are working from home due to the pandemic, you may well be wondering how you’ll acclimate to your new workplace from your same old kitchen table.

Tim Su, ’07, MS ’10, is well steeped in remote office culture. The co-founder of Tandem, a tool for creating virtual workspaces for remote teams, Su has spent a lot of time thinking about what’s lost when colleagues can’t be together in person and how the little interactions we take for granted throughout the workday can be re-created digitally. We asked him for his best advice on fitting in, standing out, and otherwise nailing it at your new, remote-for-now job.

Su: One thing is that typically in the past, remote work was done asynchronously, so most of the communication was written—through documents, task lists, email, things like that. What’s different now is that the work that was typically done in the office—things that weren’t designed to be remote—are now having to move to a Zoom meeting because people can’t just talk to each other in the office.

What I’ve observed is that if you have a bunch of back-to-back Zoom meetings, you feel tired at the end. If you have a bunch of in-person meetings, you can feel energized. You can feel like we were able to collaborate and we left the meeting with more energy than we had when we started. And that rarely happens with these online meetings. The work is the same, but it’s no longer as energizing because you’re not having those little moments of human connection.

You’ve added a number of new people to your team recently, as the demand for remote work tools, including Tandem, has increased. What are new hires missing when they join a company that’s working remotely right now?

A company that’s built around being in the office doesn’t have to worry about making time for the team to have normal conversations and get to know each other better, because it happens naturally and organically. Now everyone’s at home, and people aren’t able to have fun together, get to know each other, all those things. Lunchtime is an example—lunchtime is normally a time in the office where people sit around and have nonwork conversations.

At Tandem, we do something called morning coffee. We used to have a coffee machine—well, we still have a coffee machine in the office, but no one can use it. Now everyone makes coffee on their own. So we kind of hooked into that and said, “Hey, join this call if you want to while you’re making coffee.” People drop in and out throughout the morning. There’s no agenda, and a lot of interesting conversations are happening through that. I think it’s the same reason that companies are willing to spend millions of dollars on buildings, because having that space creates these sparks and creativity, and creates better work. As folks really start to think about this as the new normal, finding those opportunities to let people talk outside of the structured meeting context is so important.

Why are those kinds of conversations especially important for people who are new to a company?

Trust is so important in the workplace. You build trust through building these individual relationships, so that if you’re going to ask someone to do something for you, they think of you as a human being and not as a burden or as the boss, right? That is something that typically happens organically. And to make it happen intentionally can feel manufactured, but it’s so worth it.

One of our investors was telling us that when she made a remote team, she would make people do BuzzFeed quizzes. And it’s so silly, but how else are you going to know those things about your co-worker? They’re just not going to come up in a meeting where everyone’s trying to solve a problem, right? No one’s going to be like, “Oh, I actually really like Frozen, and my kids watch it five times a day.” People don’t really have the mind space or the patience [in online meeting] settings to share a lot personally, so you really have to create separate space. And I actually think this is a great opportunity for the new or younger folks to show initiative and show leadership. If you’re coming in and you’re able to suggest some kind of get together like an all-team game of Pictionary or something like that, those are ways to show leadership, serve the team, get to know people, have fun and laugh, and really make a positive impact on the workplace.

What are some things a new employee can do to get acclimated when everyone’s working remotely?

One of the challenges of everyone being at home is that it’s harder to understand what everyone else is doing during the day. That’s something you wouldn’t have to be that intentional about in the office. You would just walk over and be like, “Hey, I’m Tim. I’m new. What do you do here?” So having a different mentality of, “I’m going to set up one-to-ones with people to really build relationships, knowing that it’s going to be harder. But this work that I put in now, it’s going to help me down the line.” That’s a big one.

Not being afraid to speak up and to get what you need, especially now, is so important. If you don’t speak up, if you’re just kind of sitting confused in front of your computer, no one’s going to notice, unfortunately.

And then, third, trying to get some kind of written onboarding plan. And if one doesn’t exist, try to make one yourself. Have that document to refer to that says, “These are the things I’m going to do over the first two months to get myself ramped up.” Show your manager, and have your manager tell you “This is a good plan” or “I want you to work on this instead.” That’s going to drive a lot of clarity.

Are there ways to gauge the office culture when no one’s in the office?

I think it really comes down to asking questions. In particular, asking why. You’re curious, right? It’s like, “Why do you do your planning in this way? Why do we have this big all-staff meeting? What do people do there? How do people decide what to do next?” There’s this natural desire when you come in to want to fit into the norms. But you won’t know what the norms are. So trying to ask those questions up front is going to be helpful. It’s going to make the team be more thoughtful, too, if they haven’t been thoughtful about why something happens a certain way.

What advice can you give new grads starting their first professional job in the middle of a pandemic?

Relationships are really the most important part of any job. Whatever work you’re doing, coming into a place and learning from the people who are there is the most important thing you can do. Spending time learning and talking to people is not going to be a waste of time. That’s really what I think will serve you best and will serve the team and company the best. You’re going from one learning environment, the university, to another learning environment, the job.

Any tips for getting a job in a pandemic?

Definitely be patient. It’s harder than normal, but it’s not a reflection of you. A lot of people are in that situation. So don’t take it personally.

[Smoothing hair] Anything else?

Get to a setup where you have a good internet connection, if that’s possible. If there is a bad internet connection, it’s going to be hard to communicate, and then it’s going to reflect poorly on working with you. Some things are easier to change than others, but I definitely think what’s in the background—are you on your bed, what does your hair look like—these are things you have some control over. In that first meeting, every little thing is going to be helpful.

Advice for applying just-go-with-it wisdom to your career, relationships and life.

How to Be Present

And what that even means.