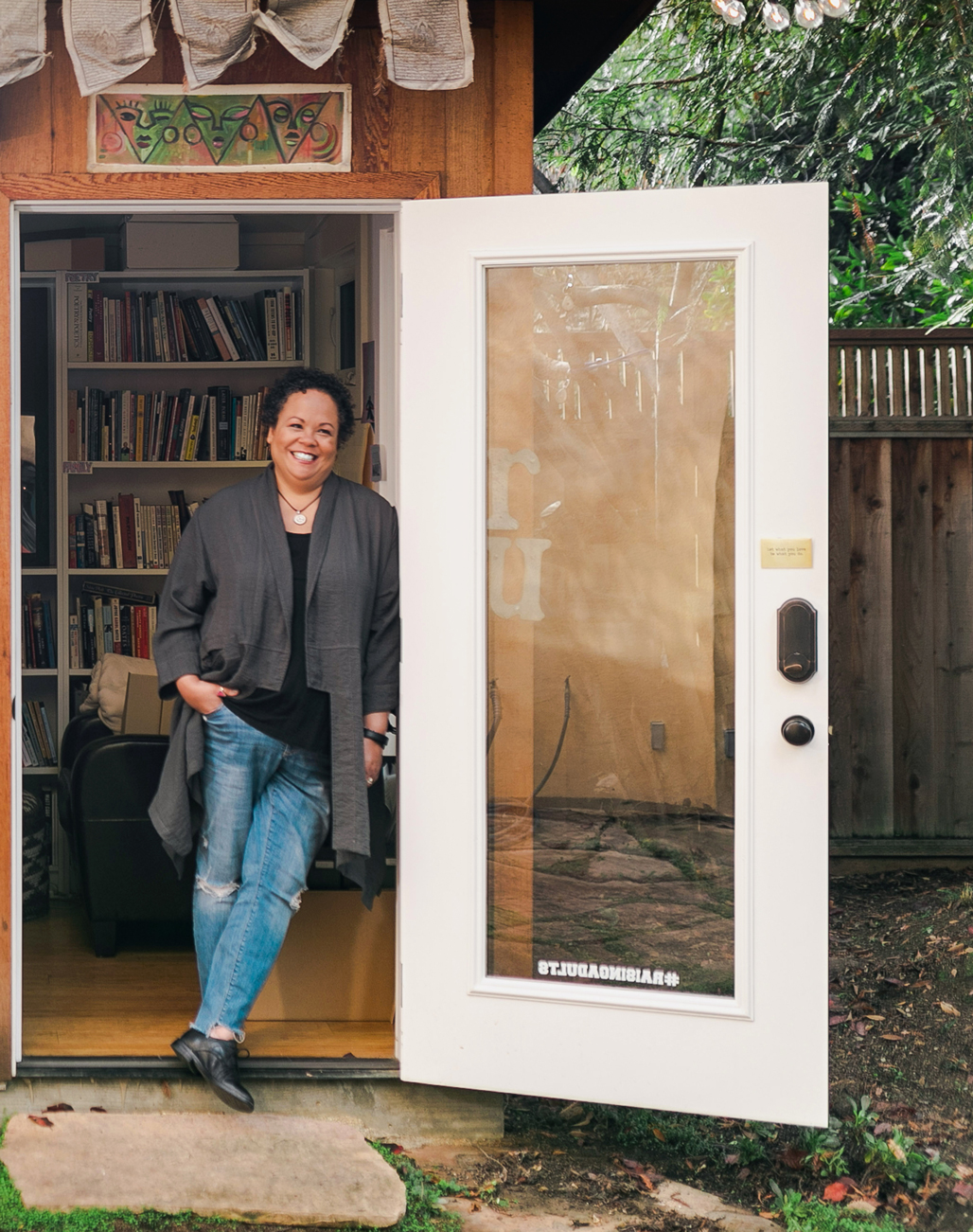 Success as an author came fast for Julie Lythcott-Haims. Three years after stepping down as Stanford’s dean of freshmen to pursue a writing career, she had a bestseller: How to Raise an Adult, an eyewitness to the epidemic of overparenting and a guide to a better way. But then came a “how” she was less poised for: how to write a sequel.

Not that she had trouble writing. In 2017, she released Real American, a well-received memoir about growing up biracial. But her publisher was nudging her back to the domain of her debut, a pop-culture hit one New York Times reviewer likened to “the Black Hawk Down of helicopter parenting.” In her next book, they agreed, she would shift her gaze from raising an adult to becoming one.

It might seem a small pivot—from one side of the parent-child equation to the other—but for Lythcott-Haims, ’89, it proved paralyzing. She’d spent years at Stanford and as a Silicon Valley mom steeped in the habits of parents stage-managing their kids—and as a mother of two, she certainly would admit to having done her fair share of hovering. Overparenting was an area she knew cold.

But what expertise did she have on becoming an adult, besides having slowly emerged as one herself, with plenty of mistakes along the way? And wasn’t there a suspicious irony in being the woman who blew the whistle on checklist childhoods only to create a checklist for young adults? “If you could have heard me talking to friends, I described this book like this poor stepchild I didn’t want to adopt,” she says. “I dwelled in that space for a couple of years.”

Her breakthrough came with an assist from a handwritten letter sent by a Washington University student named Kristine. Lythcott-Haims’s first book, Kristine wrote, had helped her see how her parents’ heavy-handedness had left her a little “underbaked.” Just that day she’d had to push her mom to let her 16-year-old brother slice his own salami. Kristine didn’t want to obsess on blame; she wanted to claim her agency—and to foster it in her brother. How could she?

The letter jolted Lythcott-Haims and helped develop a vision of whom she was writing for and why they would want to read what she had to say. “HEY Y’ALL WE’RE WRITING THIS BOOK FOR KRISTINE,” she wrote to her editor and assistant, with a photo of the letter.

She wasn’t an expert, but she’d long been a mentor. She was going to talk to her readers as if they were her former students, who still ask for her advice over coffee. She was going to be open and honest with her own hard-won lessons and the experiences she’d gleaned from others. “I am not smarter than you. I am not wiser than you. I’m just going to tell you what I know,” she says. “It’s meant to be this very close narrative that ultimately feels like a companion walking this journey with the reader.”

The result—Your Turn: How to Be an Adult—came out in April. And judging by the reactions of some young Stanford alums, she appears to have hit her mark.

“Going through this book has been the perfect balance of uncomfortable and loving,” says Michelle Goldring, ’10, MA, ’11, who is part of a group of alumni who began discussing advance copies of Your Turn on Zoom this winter. A corporate attorney who recently shifted into the HR side of law, Goldring didn’t personally know “Dean Julie” at Stanford—they embraced once in White Plaza when Goldring was giving out “free hugs”—but the voice in the book feels intensely familiar to her. “Reading this book sounds like sitting down in her office or sitting with my favorite people who I knew at Stanford who kind of set me straight.”

Key to the book is that “adulting”—dear grammar traditionalist, she goes there—isn’t reaching a milestone, it’s reaching and sustaining a mindset. Lythcott-Haims was 25, married and armed with degrees from two of the world’s most prestigious universities before she ever felt like she was doing more than playacting as a grown-up.

Recognition of her arrival came only when the truck moving her and her husband’s possessions from Harvard Law School back to the Bay Area went up in flames—and she realized that not only was no one coming to the rescue, but she didn’t want anyone to. She and her husband, Dan Lythcott-Haims, ’91, could and would do this. They were adults—or at least adulting. The process never ends.

‘I very much believe in the power of our personal stories to help others feel less alone and more seen and supported.’

“Adulting is wanting to, having to and learning how,” she says, a phrase she calls the book’s guiding principles. And it’s hustling.

Therapists’ couches, she writes, are heavy with the weight of 40- and 50-somethings who marched lockstep into sensible, ultimately unhappy livelihoods. Lythcott-Haims herself started on that path as a corporate lawyer. But today, she sees a contrary problem—abetted by the over-protected childhoods she’s famous for calling out—where kids emerge slowly into adulthood, and their 20s turn into a sort of playground. Your Turn advises another path: Find and follow your own voice, most definitely, but get your “butt in gear” and engage with the world to find your place in it.

But how to get there and know it, short of a burning truck blazing like a message from on high? Your Turn mixes tactics, tough talk and earnest encouragement with Lythcott-Haims’s personal experiences and those of more than 30 people she interviewed from all walks of life. Weighing in at more than 450 pages, the book is filled with people who’ve wrestled with racism, disease, incarceration, mental illness, death, divorce, poverty and, yes, helicopter parents in search of an authentic adult life, often with rewarding results, and sometimes falling short.

The characters span political views, socioeconomic statuses and mindsets. Lythcott-Haims purposefully introduces each by race and sexuality. This isn’t a book where people are white and straight unless otherwise noted.

Some of the stories connect to Stanford. Lythcott-Haims tells the journey of Akshay, a 36-year-old doctor whom she remembers from campus as a warm, brilliant and clearly scared 22-year-old who would spend the next decade getting his conservative Indian parents to accept that he is gay. Others—like the 23-year-old white Lyft driver who came to the rescue when Lythcott-Haims’s Prius conked out—are the fruits of the author taking her own advice on the value of talking to strangers. His journey is one of self-reliance at an early age. Each receives equal weight.

“I very much believe in the power of our personal stories to help others feel less alone and more seen and supported,” she says. “This isn’t an explication on adulting. This is like, ‘Hey reader, I’ve been there, you’re there now, let’s talk.’ ”

Lythcott-Haims is candid about her own challenges in work, life and love. She reveals the despair that led her to abandon law for a job at Stanford, the twists and turns of navigating three decades of marriage, and her regret at economic missteps (she did not spend the insurance money from the truck fire wisely). “She is so much more vulnerable and open and honest than I ever expected from someone who was always already so vulnerable, open and honest,” Goldring says.

The author’s continuing evolution is part of what makes the book inspiring to Fannie Watkinson, ’12, another member of the Zoom reading group, who quit her job in educational technology in 2017 and spent the next three years exploring careers. She recently started working as a life coach.

‘Adulting can’t be boiled down to just 10 steps. It’s a very philosophical conversation about what life is, when life feels good, and what gets in our way.’

For sure, the book offers direct advice and mantras, like most self-help books. “You’re not perfect,” “stop pleasing others” and “get out of neutral” are some that Watkinson picks out as meaningful to her. But, Watkinson says, the book is distinctly compelling in the context of Lythcott-Haims’s life and its continuing variety, typified in the way she has changed careers from attorney to dean to author.

“Julie’s career, her way of being in relationships, the way she shares the stories in the book, all embody to me that reinvention process—that constant change is actually the way that we are becoming ourselves,” Watkinson says. “And I find that really compelling and really beautiful and not the common narrative that always gets shared.”

Some of the insights are very particular. Kristine, the student whose letter gave Lythcott-Haims a kick in the pants, gains more independence by persuading her mom to turn over one household responsibility—cleaning the family toilet. Still, Lythcott-Haims is after a broader discussion about life.

“Adulting can’t be boiled down to just 10 steps,” she says. “It’s a very philosophical conversation about what life is, when life feels good, and what gets in our way.”

She adds: “My hope is that, as [readers] get a taste of it, as they hear the voice of it, they will be drawn in and they’ll decide it’s worth turning the pages.”

As far as what’s next? She’s considering co-writing a memoir with her 82-year-old mother, which could take parenting and adulting insight into a whole new trimester of life. Her mother joined Lythcott-Haims’s household more than 20 years ago in an arrangement inspired by a goal any helicopter parent could appreciate: trying to afford a house in the Palo Alto Unified School District.

The result has come with tremendous upsides and a host of challenges, Lythcott-Haims says. In an era when things like COVID-19 and economic hardship are forcing more people to try multigenerational living, she and her mother want to offer an account of why they did it, what was hard and what they learned.

Or at least that’s what they plan to write. With chapters alternating between mother and daughter, the two might put out contrasting realities. “You know the things she writes about, like what made it hell, may not be on my radar, and the things I choose to write about may not be on hers,” she says. “But, you know, that’s sort of the point of the book.” Spoken like an adult.

Can They Ever Catch Up?

The Great Recession set millennials back. A decade later, they haven’t recovered. Here’s what’s going on.

You can get more of what you want, even in a recession, says Business School professor Margaret Neale.