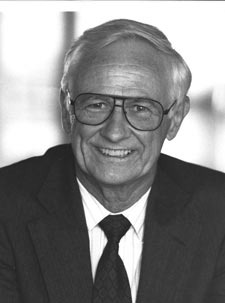 Long before same-sex marriage was on many people’s radar, William A. Norris, a judge on the United States Court of Appeals for the Ninth Circuit in San Francisco, had been working for legal equality for gays and lesbians. In 1988, Norris ruled that the Constitution’s equal protection clause guaranteed that gays could serve in the military. It was the first time that a federal court had stopped a branch of the armed services from excluding people on the basis of sexual orientation. Many view the ruling as a precursor to the legalization of gay marriage.

Born in Turtle Creek, Pa., Norris worked as a reporter for the local newspaper. After a stint in the Navy, he entered Princeton University; in 1951, he graduated with honors. When he finished law school, where he was executive editor of the Stanford Law Review, Norris served as a law clerk to Supreme Court Justice William O. Douglas. He went into private practice in 1956, and then in 1980 was nominated to the Ninth Circuit by President Jimmy Carter.

Known for his intelligence and activism, Norris was active in private practice and civic affairs, serving as a member of the California Board of Education and the Board of Trustees of the California State Colleges. He was president of the Los Angeles Police Commission from 1973 to 1974, and ran for California attorney general in 1974; he won the Democratic primary. In 1979, he chaired Mayor Tom Bradley’s Advisory Committee on the format of a museum of modern art, which became the Museum of Contemporary Art, Los Angeles.

Norris authored more than 400 opinions on a variety of legal issues. His autobiography, Liberal Opinions: My Life in the Stream of History, was published in 2016.

Jane Jelenko, Norris’s wife of 27 years, says, “Bill’s overriding characteristic was optimism. He had the most positive energy of anyone I’ve ever known. He always had a firm belief that he could make any change needed. And he was excellent at spotting talent; he was constantly recruiting and mentoring people and grooming them to send off on their careers.”