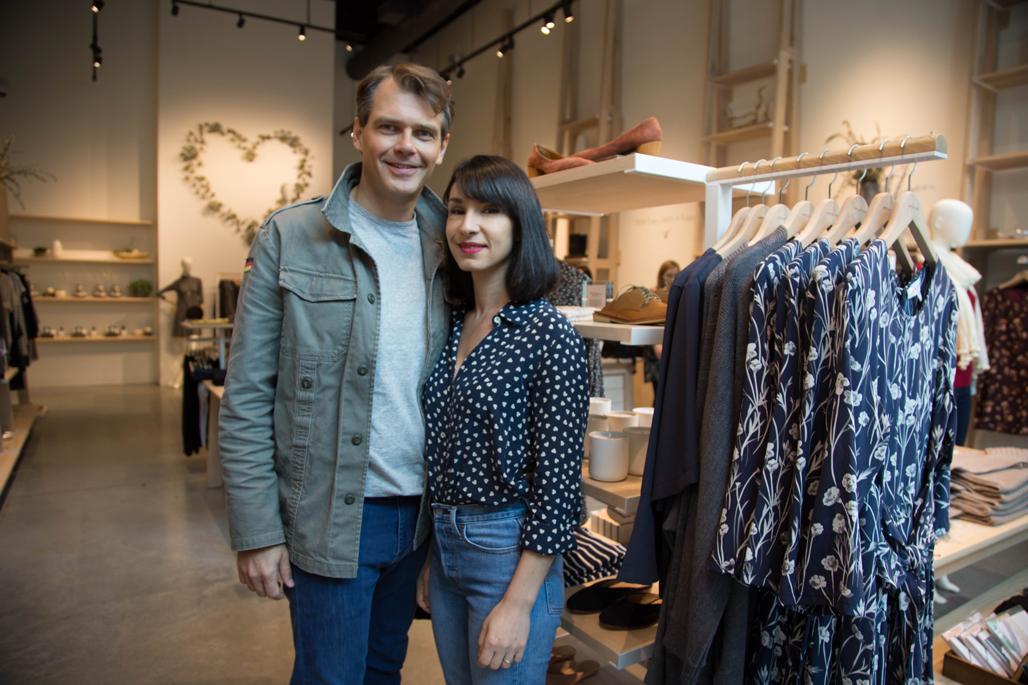 If the meaning of the French name slips you by, it’s easy to walk into one of Amour Vert’s boutiques expecting nothing but the Parisian chic in its windows. And that’s by design, says Linda Balti, the brand’s co-founder and creative director.

No woman buys clothes simply because they’re “eco,” she says. The garments must be beautiful, first and foremost. Sarah Murphy, a journalist who chanced into an Amour Vert store for the first time in early December and left with a “hell of a lot more” than she expected, typifies its first-time customer. She was motivated by wanting to look good.

But Amour Vert (“green love”) also weaves in a story of commitment to sustainability that’s hinted at by everything from the rare “Made in the USA” tags on its clothing to the slogans in its stores. “Buy a Tee, We Plant a Tree,” promises its new shop in Berkeley’s trendy Fourth Street district.

And indeed, for every T-shirt Amour Vert sells, it plants a tree, in partnership with the nonprofit American Forests. Some 155,000 have been planted so far.

It’s all in service of an ambitious goal, says Christoph Frehsee, MS ’12, MBA ’12, Balti’s husband and the company’s president and other co-founder. Amour Vert aims to become “a brand that defines a generation” while revolutionizing a surprisingly dirty industry.

Textile mills, for example, generate a fifth of the world’s industrial water pollution and use some 20,000 chemicals, many of them carcinogens, according to the nonprofit National Resource Defense Council. In some foreign factories, Frehsee says, textile scraps are so laden with dyes and chemicals that they’re handled as toxic waste. “The other pieces are sewn together, put on a hanger and are in your favorite department store, no questions asked.”

By contrast, Amour Vert uses low-impact dyes, is fastidious about minimizing fabric waste and hires fairly paid local labor, he says. Most of the company’s garments are cut in Oakland and sewn in San Francisco.

Even transport is selected for minimal impact—a trucking company that ships wines from Napa to L.A. carries Amour Vert’s fabrics in trucks that would otherwise be empty on their return north. “We’ve been trying to be really sustainable along the whole supply chain,” Balti says. “That’s part of our DNA.”

All this must rank as one of the more surprising outcomes of the 2007 Abu Dhabi arms show where Frehsee and Balti met amid tanks, guns and laser-guided-weapon systems. She was a computer engineer for a large French defense company, designing fighter jet simulators. He was a co-founder of MineWolf Systems, a German manufacturer of mine-clearing machines he’d been leading into war-ravaged places like South Sudan and the Balkans.

There was slight tension to their romance at first, he says: “I cannot be the guy who clears land mines and you work with these people.” Soon, though, both were looking for a new direction. Balti quit her job and, in 2009, Frehsee sold his shares of MineWolf so the couple could travel the world. Their trip included a stop in Peru, which is where the two were lying on a beach when they chanced upon the newspaper article that sowed the seeds of what was to come.

Fashion, the article said, is the world’s second most polluting industry behind petroleum, its sins ranging from pesticide overuse to toxic dyes to water wastage. 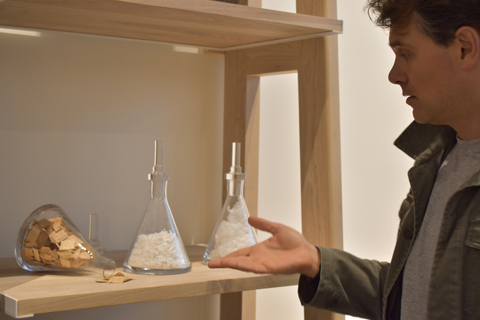 The idea didn’t take hold at first. But after the pair arrived at Stanford that fall carrying little more than a few suitcases, Balti was surprised by how hard it was to fill out her wardrobe with ecologically conscious alternatives. The choices seemed to be either luxury brands, such as Stella McCartney, or yoga-pant casual.

As Frehsee burrowed into the Emmett Interdisciplinary Program in Environment and Resources , a joint master’s program in business and environmental studies, Balti began trying to better understand fashion’s pollution problems, focusing on how fabrics are made. Eventually, she teamed with a textile engineer in Los Angeles to develop a wood-pulp blend—part beech, part cotton — into a soft, sturdy biodegradable material that seemed ideal for T-shirts.

Frehsee was eager to put his entrepreneurial hat back on. He had jumped into the mine-clearing business after an experience he had backpacking as an undergraduate in Cambodia. A midnight explosion—a cow taking an unlucky step—had awoken him to the plague of buried mines. By the time he graduated two years later, he’d co-founded MineWolf Systems, licensing new technology and borrowing from existing products to bring better speed, affordability and reliability to the field.

This time, Frehsee turned writing a business plan into a GSB project. The couple first considered selling the fabric Balti was making, but there seemed to be little value in being a textile vendor. Instead, they focused on a small collection of clothes, mostly T-shirts, and ran the operation out of their Stanford apartment. “I needed urgently an internship here for the Business School, so I thought, ‘Let’s do an internship with my wife,’” Frehsee says.

When they made their debut at a Las Vegas trade show in the summer of 2010, they were so unprepared they sat in their 10-by-10 booth with T-shirts and two interns but no order forms. They figured at worst it would be a cheap way to fail fast and move on. But the softness of their samples stopped passersby in their tracks. “We got orders within a half hour of this show starting,” Frehsee says.

The company soon expanded into dresses and tops. But it hasn’t all been smooth sailing. The world is awash in fashion brands, Balti says, and they felt like their story was getting lost in their initial attempts to market through department stores.

But now, having opened its first boutique in 2014 and launched a website in 2016, Amour Vert has found its groove. Frehsee—who is also an instructor at Stanford’s School of Earth, Energy and Environmental Sciences — declined to share Amour Vert’s revenues, but outwardly, the company seems to be thriving.

The first store was in San Francisco, and now there are six across California, one of them at the Stanford Shopping Center. Four more stores are planned for next year, including in Seattle, Austin, Texas, and Portland, Ore. Currently, Amour Vert’s website drives most sales, and products from manufacturers with aligned values make up about 25 percent of the business.

But Frehsee and Balti aim to be far bigger—not just for success of the business, but to push the whole fashion industry to be more like them. It’s an ambitious goal, but even small actors can have big influences, says Olivia Sprinkel, head of Salterbaxter North America, a sustainability consulting firm.

Fashion, she says, is following in the footsteps of the food industry, where consumers have grown to expect environmentally sensitive sourcing. That change was blazed in no small part by nimble newcomers, such as Ben & Jerry’s ice cream, whose success served as a model for—and put pressure on—large producers to respond in kind.

Sam Scott  is a senior writer at Stanford.

An Atheist in God's Country

As a graduate student in religious studies, Daniel Gullotta explores American history and religious texts in his search for meaning.