THIS IS HOW YOU DO IT: Motivated by her own experience as a Girl Scout, Acevedo wants to inspire a new generation of problem solvers. Photo: AP Photo/Patrick Semansky 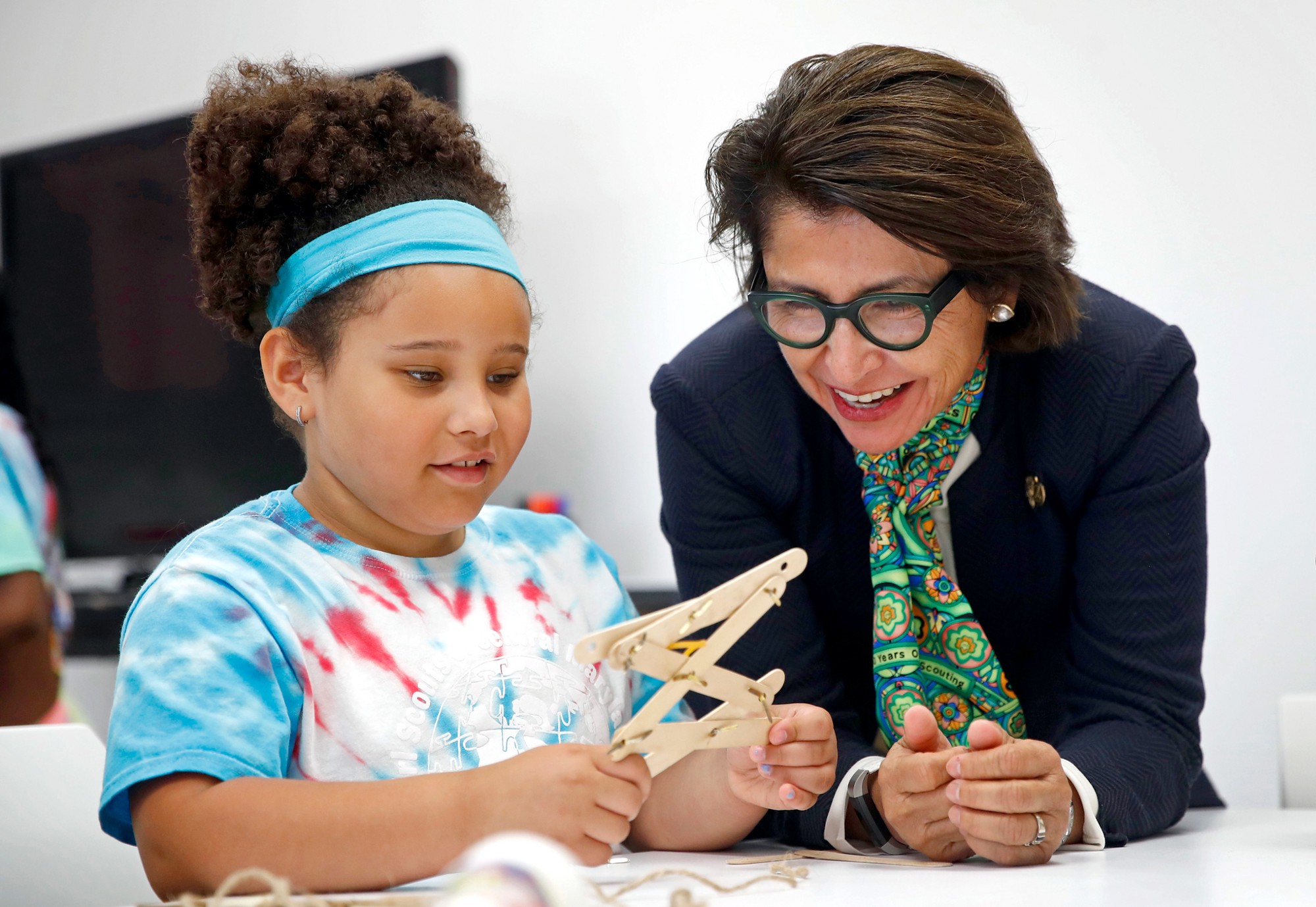 THIS IS HOW YOU DO IT: Motivated by her own experience as a Girl Scout, Acevedo wants to inspire a new generation of problem solvers. Photo: AP Photo/Patrick Semansky

When Sylvia Acevedo was 6, her 8-year-old brother, Mario, received a bicycle from their parents for Christmas. Money was tight in the family, but Sylvia wanted a bicycle too, so she kept pressing her case. By her birthday, a few months later, she had a bike of her own.

“She didn’t even wait until the next Christmas,” Mario Acevedo remembers, laughing. “And whereas my mom helped me learn how to ride my bicycle, holding it steady and stuff, Sylvia just taught herself. And then she sort of let me know that not only had she learned how to ride her bike on her own, but at a younger age.”

The bikes were just the beginning, an early indication of Sylvia Acevedo’s competitive spirit and drive to achieve.

That drive that would carry Acevedo, MS ’83, to a career in science, technology and communications. Now Acevedo is cultivating that same drive to achieve in millions of young girls around the country in her latest role, as CEO of Girl Scouts. Acevedo, who served on the advisory board of the organization for eight years, including as secretary, was officially selected for the post in May 2017 after a year as interim chief.

“I was very honored that they asked me to stay,” Acevedo says during an interview in her office at the Girl Scout headquarters on 5th Avenue in New York City. (A cookie jar near the reception desk holds Samoas, a staple of the Girl Scout cookie line.) “I really believe that Girl Scouts matters to the nation.”

The leadership development organization, which was founded in 1912 and has a membership of 1.8 million girls around the country, certainly matters to her. She traces the origin of her career as a scientist and her affinity for the Girl Scouts to what she describes as a family tragedy: When a younger sister contracted meningitis that ultimately led to developmental disabilities, Acevedo’s parents — a homemaker who emigrated from Mexico and a civil engineer from El Paso — moved with their children to another neighborhood in Las Cruces, N.M. It was a difficult time, but the move did put Acevedo within reach of a Girl Scout troop, where an adult sponsor’s impromptu lesson about the constellations in the night sky ignited her love of science.

At a time when the United States is struggling to retrain its workers to meet the needs of a changing global economy, Acevedo says, the Girl Scouts “are committed to really expanding our STEM workforce.”

At first, Acevedo was worried her family wouldn’t be able to afford the Girl Scout activities. But “the troop leader said, ‘Don’t worry; we’re going to sell cookies,’” recalls Acevedo. “And then she explained that once you decide what you want to do, then you set goals around that — you set budgets. She really taught me that you can create your own opportunities, and for a kid that grew up living paycheck to paycheck, that was a whole new world of thinking and possibility.”

Mario Acevedo says Acevedo was more affected than he was by what happened to their sister — in part because the two girls shared a room — and that the Girl Scouts came at just the right time in Acevedo’s life.

“Sylvia really processed what happened to my other sister, Laura,” he remembers. “She felt the world was a dangerous and disorderly place, and, when she got involved with [the Girl Scouts], it kind of brought order to her world. It made her realize you can plan ahead; you don’t have to let things happen to you.”

So Acevedo began to make plans. In fourth grade, when a teacher named Mrs. Baldwin showed photos of universities around the country to her class, Acevedo took one look at the picture of Stanford’s campus and decided she wanted to go there. In high school, according to Mario Acevedo, she refused to attend home economics classes, forcing school administrators into a compromise: She would be allowed to take an AP math class instead.

She earned a bachelor’s degree in industrial engineering in 1979 from New Mexico State University. Her first job was at NASA’s Jet Propulsion Laboratory (JPL) on the Voyager 2 mission to Jupiter, which sent some of the first high-quality photographs of the planet back to Earth.

“It was such a great moment,” Acevedo says. “JPL had set up televisions in the lunchroom, and you would go there and you’d just be like, ‘Oh my God, look at that image. This is so exciting.’”

Acevedo left NASA after a few months to go to Stanford. She says the opportunity was too good to pass up, but she also had determined that the pace of work at the space agency was too slow for her. (Another project she worked on — a probe of the sun — isn’t scheduled to launch until this summer.)

“I realized these missions don’t take years; they take decades,” says Acevedo, who moves, as she likes to say about her troops, “at the speed of girls.”

For the next 20 years, Acevedo worked as an engineer or executive at IBM, Autodesk and Dell. In 2003, she started a firm that specialized in helping employers communicate with their Spanish-speaking employees.

Now she’s putting all her skills to work at the Girl Scouts, where she has prioritized a focus on science, technology, engineering and mathematics (STEM) and outreach to minority populations. At a time when the United States is struggling to retrain its workers to meet the needs of a changing global economy, Acevedo says, the Girl Scouts “are committed to really expanding our STEM workforce.”

“We are there to help develop the pipeline,” she says.

In June of last year, the organization announced a new partnership with Palo Alto Networks, a digital security company, to create the Girl Scouts’ first-ever cybersecurity badges. By September 2018, there will be 18 such badges for girls in grades K-12. The Girl Scouts also announced 23 new outdoor and STEM badges last year, in collaboration with Code.org, GoldieBlox (a toy company aimed at construction products for girls), the Society of Women Engineers and others. Acevedo calls girls an “untapped resource” and says Girl Scouts has figured out how to put that resource to use.

“When Sylvia called, I would return that phone call immediately. I had that confidence that something good was going to happen.”

Acevedo’s commitment to young people extends to one-on-one meetings with scouts around the country. Kasee Parker, a member of the Girl Scouts of Central Texas (which honored Acevedo as a Woman of Distinction in 2013), saw that firsthand. The 19-year-old, who started her freshman year at Texas Tech University last fall and hopes to be an engineer, had the chance to meet with Acevedo last summer.

“I was starstruck,” she says, of Acevedo and her path to engineering. “If she could do it, I can do it too.”

That’s the message Acevedo tries hard to share, including through a middle-grade memoir due out this year from Houghton Mifflin Harcourt in Spanish and English that will trace her meteoric rise from Las Cruces. (Acevedo is working with a writer who, she adds with a smile, is helping her access a “middle school” voice, including all that adolescent angst.) The memoir is just her latest collaboration with Houghton Mifflin Harcourt; she previously developed an English-learner family engagement curriculum with the publisher.

Acevedo has long been active in education. In Austin, where she moved when she joined Dell, she helped organize the Feria Para Aprender — or the Learning Fair — for Latino families in the Austin Independent School District and served on the founding board of the Ann Richards School for Young Women Leaders, which opened in 2007.

Pat Forgione, MA ’73, PhD ’77, was the superintendent of the Austin school system when Acevedo lived there and worked with her to set up the Feria for Latino families.

“When Sylvia called, I would return that phone call immediately,” he remembers. “I had that confidence that something good was going to happen.”

Jeanne Goka, the former principal at the Ann Richards School, agrees. She says Acevedo was a constant presence on her campus in the first few years of the school’s existence, acting as a guest speaker, recruiting other guest speakers, and generally making herself available for the students, many of whom are economically disadvantaged.

“You can’t say that about any other board member in those first days,” she says. “Sylvia was out there with me, in the halls, in the classrooms, in front of the girls — ‘I look like you, and this is what I’ve done.’”

Sometimes Acevedo would bring a prop for a hands-on engineering demonstration.

It was her bicycle.