Young, Restless and Tuned In

Does music from your college days still make you sing?

Think back to your college days, to a lazy afternoon sitting in the sun on a grassy slope. Maybe a friend was with you, or more than one. Maybe you were thinking about your next test (probably not) or your next date (more likely) or how much money you would need to go to Los Angeles over spring break. Maybe you were in love, or thought you were. Maybe there was music nearby.

Was the music that played in the background important? For a lot of us, it was. Still is.

The music I consume in middle age is mostly disposable and easily replaced. Sure, there is plenty of good stuff to listen to, but it's often the equivalent of sonic wallpaper, pleasant but unobtrusive. In college, music meant something more: energy, aura, inspiration. It was a handhold on how we felt. We were invested in it, needed it. 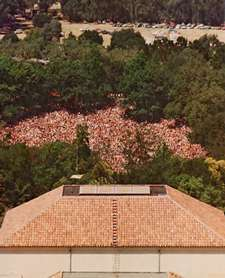 Perhaps that is why the music of your youth stays with you. Long after you've acquired homes and raised children and fulfilled professional goals, a few bars from a favorite song can whirl you back to a time when every day felt brand new, and you were figuring how to be. So scary and exhilarating, not knowing what came next, where we'd wind up—remember?

If the music from your college years was being performed in a beautiful outdoor arena a few steps from your dorm room, well, you can imagine why that place would dwell in your memory. For some alums of a certain age, all it takes to evoke a smile are the words "concert at Frost."

Our cover story in this issue describes an era when some of the world's greatest bands came to campus, one after another. I have seldom had more fun working at this magazine than I have in the past few weeks unearthing anecdotes and photos from Frost Amphitheater's rock 'n' roll heyday. Frost played host to a lineup that reads like a sampler from my music collection. Eric Clapton. Creedence Clearwater Revival. Santana. Ray Charles! Jefferson Airplane, about to become a giant force in Sixties America, live on campus, for two bucks a ticket. Are you kidding me?

I really can't relate to how cool this must have been. The biggest name to come to my alma mater was the Guess Who, who had a few hits in the '70s but, guess what, had lost their lead singer—and their relevance—by the time they came to our little school.

Every university has periods in its history that clarify as extraordinary only with the passage of time. As the musicians who played it pass into legend, Frost's playground becomes all the more significant, exerting a powerful pull on the story of music in the Bay Area. The 20 years or so when Frost rocked carry the gravity of importance now; they are a peculiar and wondrous chapter in the Stanford narrative.

For alums, though, it's not about history. It's about memory, the sweet residue of sunny afternoons on a grassy slope surrounded by your friends, not quite ready to be grownups.

Kevin Cool is the former senior editor at Stanford.

The Steadiest of Statesmen