BUILT FOR THE ROAD AHEAD

Architect Marcy Wong, MS '77, is a principal in the firm that designed the Ford Assembly Building in Richmond, Calif., which received a 2011 Honor Award for Excellence from the American Institute of Architects. The project converted a derelict 500,000-square-foot automobile factory, built in 1931, into a gleaming waterfront mixed-use venue that is part of the Rosie the Riveter/World War II Home Front National Historical Park. Structural engineer Gregory Luth, MS '75, Engr. '79, PhD '91, collaborated on a dramatic element of the project: an unusual stair that has won awards for engineering and design. In addition to the AIA award, the profession's highest recognition, the Ford project has been cited for excellence in historic preservation and sustainability. James Madsen, '05, was Orton Development's manager for this project. 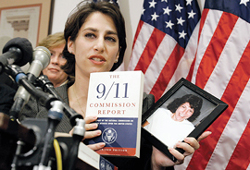 Carie Lemack, '97, MBA '04, executive producer of the 2011 Academy Award-nominated short documentary Killing in the Name, met the film's protagonist, Ashraf al-Khaled, at a 2008 United Nations symposium that brought together victims of terrorism from around the world. Lemack's mother, Judy Larocque, was killed aboard the hijacked American Airlines Flight 11 on 9/11. Al-Khaled, a Jordanian Muslim, survived a suicide bombing by an Al Qaeda terrorist at his 2005 wedding. Twenty-seven people were killed in that attack, which galvanized Al-Khaled to speak out about the real human costs of jihad.

Actor and environmental activist Ted Danson traces his concern for the world's oceans to a vivid nightmare he had as a child. As a founder of Oceana, the largest conservation organization focused solely on the seas, Danson, '70, has worked for 25 years to combat offshore oil drilling, overfishing, ocean acidification, fish-farm pollution and other degradations to the marine biosystem. In April he published Oceana: Our Planet's Endangered Oceans and What We Can Do to Save Them (Rodale Books, $29.99), written with journalist Michael D'Orso.

"This is a very humbling field to be in. We keep falling victim to the kind of human frailty of thinking that what will happen next will look an awful lot like what happened before."