SHEER GRIT: Jeanette Pohlen and her teammates found themselves in a game-long scramble. Don Feria/stanfordphoto.com

Camaraderie was the theme as the women basketball players pounded out victory after victory for most of their season. And it remained the essence of the squad when, for the fourth straight season, the team failed to win a national championship after reaching the Final Four.

Perhaps the most eloquent comments came from junior forward Nneka Ogwumike after the Cardinal suffered a stunning 63-62 loss to Texas A&M in the NCAA tournament semifinal. She noted that members of the champion men's volleyball team had told the women that the most important thing to keep in mind was not the eventual outcome, but rather, "the journey there." Fighting to keep her voice from breaking, she added, "And I wouldn't pick anyone else in the world to spend this journey with, like Kayla [Pedersen] said. I'd lose with this team any day over winning with another team." 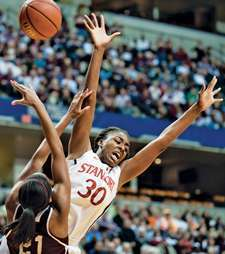 LAYED OUT: Nneka Ogwumike threw everything she had into Stanford's ill-fated effort. Photo: Don Feria/stanfordphoto.com

As a senior, Ogwumike will get another shot at winning. But no matter how tightly bonded next season's squad is, it will bear the asterisk of a remarkably elite but persistently uncrowned program. A 33-3 record; a 63-games-and-counting unbeaten roll at home; a historic triumph over University of Connecticut to halt that arch-foe's NCAA-milestone winning streak at 90 games; an 11th consecutive first-place finish in the Pac-10 and a second straight year going undefeated in the conference—it's all entwined with the frustration of being dominant enough to repeatedly be on the verge of a national title without the fulfillment of capturing it.

Coach Tara VanDerveer deflected the question about how she was handling another Final Four loss. "There're 332 coaches that wish they were here, even if they were to lose in the semifinal game. I'm really proud of our team. . . . It's not about me. It's about them."

When the regular season was over, before winning the Pac-10 tournament and the four NCAA tourney games that led to the Final Four, VanDerveer had been effusive about the long list of attributes demonstrated by her players, from their inherent talent to competitiveness and veteran leadership. But the two words that always seemed to frame her conversation were camaraderie and closeness. This team, said VanDerveer, whose head coaching career began in 1978, made her want to "bottle it and coach it the rest of my career."

The reality defies the wish. Two mainstays, Pedersen and Jeanette Pohlen, came to the end of their four-season careers in the game against Texas A&M. Injury-hounded fifth-year senior Melanie Murphy, providing spark off the bench, also was playing her final game. Ogwumike, who delivered an inspirationally clutch and gritty 31 points in defeat, will provide considerable star power in 2011-12, but two other key players, her sister Chiney and guard Toni Kokenis, will be sophomores on a learning curve. Key reserves such as redshirt sophomore Sarah Boothe and sophomore Joslyn Tinkle will have to prove they can handle much bigger responsibilities as juniors.

Pedersen and Pohlen finished up on exasperating notes that contrasted sharply with the vital contributions that otherwise defined their season. Pedersen had 10 rebounds but just four points, and Pohlen, erratic in the tournament after being the Pac-10's player of the year, made seven of Stanford's 22 turnovers under pressure from Texas A&M's intense defense.

"I feel bad for Kayla and Jeanette," said VanDerveer. "They wanted this. They worked hard. They dedicated themselves and committed themselves to this team and this program." 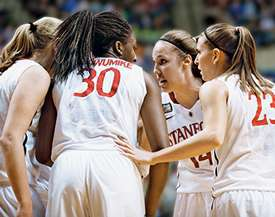 Relatively late in the second half, Stanford had a 10-point lead. But Texas A&M, which had upset vaunted Baylor to reach the Final Four, relied on smothering defense until it moved ahead 61-60. After a nearly gymnastic layup by the elder Ogwumike put Stanford back in front with 9.2 seconds remaining, Texas A&M raced through flailing Cardinal defenders to slip in a decisive layup with 3.3 seconds to go.

"We had them down, and we didn't knock them out," VanDerveer said. "Their defense was extremely disruptive. They worked very hard."

"It's hard. I mean, it's an awful feeling," said Pedersen. But harder than the loss, she continued, is "leaving these girls. And I just thank God for every opportunity I've had with these girls over the last weekend, [and last] four years, and it's been wonderful."

Those college-era intimations got it right: Becoming someone who could lead a family is 'a daring adventure.'

Bouldering With the Bump