The new laser at SLAC will wow you. 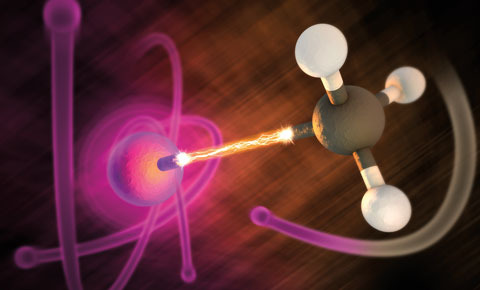 Seven years after its debut at SLAC, the world’s most powerful X-ray laser continues to astonish—even as work has started on an even more brilliant successor.

A billion times brighter than anything before, the Linac Coherent Light Source uses a 1-kilometer stretch of the lab’s famed linear accelerator to unleash X-rays in rapid-fire pulses, each one lasting just quadrillionths of a second.

Together, the flashes capture stop-motion movies of individual atoms and molecules in action, a power being harnessed for everything from mapping photosynthesis to seeing how medicines react with receptors in cells. The research is all the more remarkable considering once widespread doubts that the experimental technology would ever justify its price tag of nearly half a billion dollars.

“Initially, nobody knew whether this would even work,” says Mike Dunne, a Stanford professor of photon science and director of LCLS, as the laser is known. “It went way beyond anybody’s expectations.”

But there’s no resting on laurels. The federally funded, Stanford-run lab began work this spring on a more powerful sequel, LCLS-II, which will be 10,000 times brighter, 8,000 times faster and, at $1 billion, about twice as expensive. The Department of Energy is footing the bill.

The speed of the turnaround between the two projects is unprecedented in his experience, Dunne says, a testimony to both the original laser’s success and to intensifying international competition. Next year, a similar European X-ray laser is scheduled to open in Germany, capable of flashing 27,000 pulses a second, versus 120 for SLAC’s current laser.

By comparison, LCLS-II will fire up to 1 million pulses a second when it opens, scheduled for 2021 or earlier. “So is the march of science,” Dunne says.

Such mind-bending speeds matter because many chemical and biological reactions, such as a plant’s absorption of sunlight, involve events that happen every now and then, at least in the context of such infinitesimal slivers of time. “To capture that motion in a real system in a real working environment, you need to look far more often than just 100 times a second,” he says. “At 1 million times a second, you’re far more likely to catch that rare, very important transient event.”

The lasers represent a transition at the lab. For decades, it was one of the world’s premier particle physics labs. Now, chemistry and materials science, biology and physics each account for about a third of the lab’s experiments.