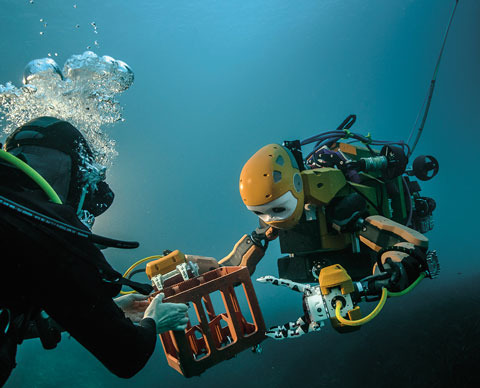 You wouldn’t want your surgeon dictating instructions to someone else holding the knife, says computer science professor Oussama Khatib. He’s explaining that, ideally, scientists wouldn’t need to work through middlemen. But archaeologists who study shipwrecks often have little choice: Their work sites can lie hundreds of feet underwater, reachable only by expert divers, if at all.

That’s a big reason why Khatib’s latest project has made such an international splash. In April, he and a team of students and archaeologists successfully deployed a robot 100 meters down to the murky bottom of the Mediterranean. There they recovered a vase from La Lune, a French ship that capsized some three and a half centuries ago.

Khatib has been working at Stanford toward this kind of advanced robot for more than 20 years. The result, called OceanOne, resembles a human torso, leading some to dub it a “robo-mermaid.” Wires run out its back and up through the water to remote controls. Equipped with a variety of sensors and thrusters that guide its movement, the machine also features a head with dual cameras for eyes and two robotic arms. Among the most innovative features are the haptic sensors in the arms and hands, which allow the human operator to feel how firmly or gently the robotis grasping something—crucial feedback when handling historical artifacts.

In addition to the complex hardware, OceanOne represents a technological leap because of its functional autonomy. “We can tell it ‘Swim over there,’ ” says Khatib, and its onboard computers will calculate and adjust its trajectory as it moves through the water. But if it gets into trouble or needs to do something more complicated, a human can take control. “You feel like you are there,” Khatib says of the experience. “And you are the expert in the field.”

The impetus for a diving robot came in 2012 from the Red Sea Robotics Exploratorium, a joint venture betweenStanford, Saudi Arabia’s King Abdullah University of Science and Technology, and Meka Robotics, a private company in San Francisco. Their goal was to develop a robot that could study regions of the Red Sea too deep or dangerous for human divers. Although the Exploratorium officially ended in December 2014, Khatib believed the research was “very, very important to finish.” Through self-funding, the Stanford team managed to continue.

After Khatib presented the robot concept last summer at an underwater robotics conference, a French archaeologist approached him to say that OceanOne was the tool he’d been dreaming of; when Khatib learned of the archaeologist’s project to explore La Lune, he signed on to help. Over the next eight months, Khatib and his students dashed to complete the prototype in time for the dive—they were still finishing the remote controls while the robot was on a plane to France for the mission.

Now with a successful maiden voyage complete, Khatib is thinking about other ways OceanOne and similar robots could be deployed. “The main objective of all that work is to deal with dangerous spaces where humans cannot go,” he says. Potential tasks might include anything from mining to underwater construction.

In the meantime, his phone has beenringing constantly with other people wanting to borrow the robot to dive to other wrecks, explore reefs and study sharks. But he already has another archaeological project in the works. He can’t divulge many details yet, except to say that it will be “much older, and much deeper” underwater. And they won’t be going just for a vase. “It’s going to be serious treasure.”