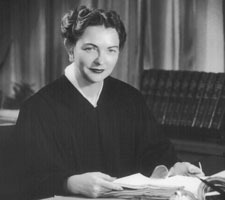 When Shirley Mount graduated from Stanford Law School in 1949—one of only two women in her class—it wasn’t easy to find a job. “A female in the legal profession,” she recalled, “was about as popular as nominating Typhoid Mary to be Dairy Queen.” Her trenchant intellect, judicious temperament and persistence, however, proved useful both on and off the bench. An early champion of the rights of immigrant children in the schools, and an opponent of discrimination in the workplace, she was called to Washington by President Jimmy Carter to become the first cabinet-level secretary of education.

At the Law School, Shirley met Seth Hufstedler, JD ’49, and together they helped found the Stanford Law Review. Their honeymoon was spent at a family cabin studying for the bar. Her husband began working in Los Angeles, and she started her own law practice, where she often was hired to ghost-write other people’s briefs. It didn’t take long, however, before her talents were recognized. “She made sure that she was put in the place where she could do her best work,” said their son, Steven.

Hufstedler was asked by California Attorney General Edmund “Pat” Brown to work on a multistate federal lawsuit over the Colorado River presented to the U.S. Supreme Court. As governor, Brown appointed her to the Los Angeles County Superior Court in 1961 and, five years later, to the state appeals court. In 1968, President Lyndon Johnson named her to the U.S. Court of Appeals for the 9th Circuit.

Hufstedler was the second woman appointed to the federal bench, a great shock to the chief judge at the time. “I’d never seen a man who was so totally shaken to his shoelaces,” she recalled. “It was all I could do not to go around the other side of my desk and say, ‘There, there, I’m not going to do the court over in chintz.’”

Confirmed by the Senate as education secretary in 1979, Hufstedler faced the grueling assignment of building a new department in the face of a hiring freeze and stiff political opposition. During her tenure, she supported programs for disabled and disadvantaged students and backed funding increases for women’s athletic programs. Newspapers called her a “prime candidate to be the first woman on the U.S. Supreme Court,” but no vacancies opened during President Carter’s term. When Carter failed in his re-election bid in 1980, Hufstedler returned to private practice with her husband. Consummate legal scholars, they worked tirelessly, as her son put it, “trying to make the court system more responsive to reality.”

Hufstedler taught at Stanford and around the world, ever zealous about mentoring the next generation of lawyers. And she never lost her thirst for challenge, whether urging Caltech to add women to its faculty, negotiating arms control with the Soviet Union or leading a congressional investigation on immigration reform.

She is survived by her husband and son and three grandchildren.

Fearless and fervid, Stanford's first art professor left his imprint on California's peaks and on lithography.