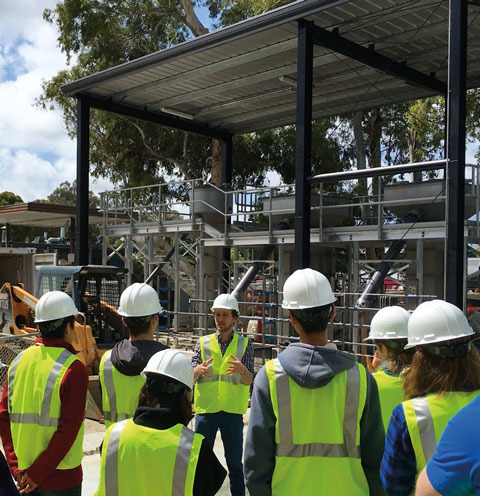 “Disrupting the sewage system” may not have quite the ring of some of Silicon Valley’s more ballyhooed cries for paradigm change.

But in a time of climate concern, water scarcity and energy challenges, finding new ways to treat wastewater is crucial, says Sebastien Tilmans, operations director of Stanford’s Codiga Resource Recovery Center, which opened in May with big goals in mind.

It’s tall talk for a modest-looking operation dealing in a realm of life most are happy to ignore. Tucked in a facilities complex at the end of Bonair Siding, the collection of pipes, pumps and containers is connected to the sewer main running under Serra Street, giving researchers a steady supply of, well, raw material for experiments.

It might not figure on campus tours, but the results could be truly transformative. Sewage treatment is a multistep process that includes screening out solids before using microorganisms to eat away organic material dissolved in the water.

Even with the bacteria doing much of the work, it’s an energy-intense approach requiring constant pumping of air into the water to keep the organisms well supplied with oxygen. It also results in onerous by-products: carbon dioxide and vast amounts of sludge, which itself needs disposal.

Often the ooze is trucked great distances for use as farm fertilizer—or it’s buried. Palo Alto, which handles Stanford’s waste, incinerates it.

But the three tanks looming at the heart of Codiga are part of a search for another way. They’re a pilot project advancing research by Stanford professor emeritus Perry McCarty and his colleagues that has developed ways to clean water using anaerobic bacteria, which have generally been seen as too slow for large-scale sewage treatment, especially at lower temperatures.

The new process requires no oxygen pumping and results in far less sludge and carbon dioxide. Instead, microorganisms convert the organic matter into methane,which can be used in biodegradable plastics or harvested as a green energy source. “Instead of being big energy hogs, we can turn them into green power plants,” Tilmans says.

Such a system would also cost less, take up less space, and better remove materials like pharmaceuticals and beauty products from the water. One of the center’s jobs is to show that such solutions work at the scale required by municipalities. No city is going to make an investment of hundreds of millions—if not billions—of dollars on a new type of plant unless the technique is ironclad.

And that underscores the urgency to the center’s work. Many of America’s wastewater treatment plants were built in the wake of the 1972 Clean Water Act, which unleashed federal infrastructure spending on a level surpassed only by the Interstate Highway System, Tilmans says.

Now many of those aging plants are nearing the end of their functional life—creating a passing moment to establish smarter alternatives. “We have this really limited window of opportunity right now where treatment plants are going to make the decision on what’s going to be the paradigm for the next 30 to 40 years.”