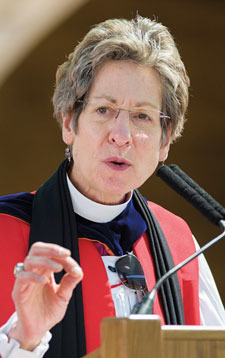 Are there lessons in goodwill and understanding—in coping with the fiercest of differences—to be extracted from nine years in an ideological crucible? If not lessons, says Katharine Jefferts Schori, the former presiding bishop of the Episcopal Church of the United States, there are values that shouldn’t be surrendered amid the tumult.

“Perhaps,” says Jefferts Schori of the controversies that marked her nine-year term, “they deepened my commitment to trying to understand the diversity involved and honoring the human beings involved in the conflict.”

Jefferts Schori, ’74, delivered the baccalaureate address at Stanford the day before commencement. This fall she will be a visiting professor at Church Divinity School of the Pacific in Berkeley, where she earned a Master of Divinity in 1994.

Her years as presiding bishop (late 2006 to late 2015) were historic, if only for her election as the first woman leader of one of the churches associated with each other in the worldwide Anglican Communion. Her tenure was also enveloped in controversy over her theological views, her support of same-sex unions and abortion rights, and her direction of legal action against dissident dioceses.

Despite conspicuous vitriol from her antagonists, Jefferts Schori says she came away from the experience hopeful. “I’ve seen some movement, some diminution of the conflict,” she says. Is there guidance to offer others, particularly in the context of so many disputes roiling campuses in a new age of activism? “To see the humanity in people who are seen as opponents,” suggests Jefferts Schori.

From that, says Jefferts Schori, flows a willingness to engage in direct conversation: “Vitriol rarely happens face to face.” Frustration can also be alleviated by patience and perspective, she notes. “The arc of the universe bends toward justice, but sometimes it takes a very, very long time.”