Words to Live By

Her shocking death left us bereft, but her art continues to inspire. 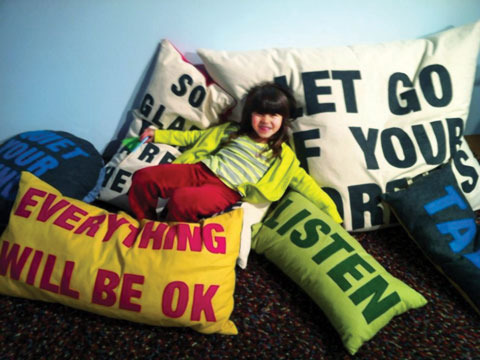 The posters popped up everywhere, rainbow-colored prints dotting the Bay Area with the same bright sentiment: “It Will Be More Beautiful Than You Could Ever Imagine.”

Each time I spotted one—at the local bakery, in a neighbor’s window, at the house across the street from my kids’ day care—my throat tightened.

I struggled to wrap my mind around a profound contradiction: My dear friend and freshman dorm-mate, Susan O’Malley, ’99, had created those prints. Now her work was everywhere. And yet she wasn’t anywhere.

Susan’s art career had taken off in recent years. She’d made nearly a hundred beautiful prints inspired by the collected wisdom of ordinary people. She’d shown her work around the country and abroad. She had a book deal.

Then the world caved in.

Last February, three days before she was scheduled to deliver twin daughters via C-section, Susan collapsed and never regained consciousness.

She’d posted on Facebook earlier that day—wondering if anyone could shuttle an artwork from San Francisco to San Jose. I’d responded, volunteering my mom.

She was big and uncomfortable by then, and had some swelling and shortness of breath. None of that seemed abnormal for someone nine months pregnant with 6-pound twins. Forty-five minutes before she died, she’d been laughing and chatting with friends. Later, an autopsy would reveal that an undetected tumor attached to her heart had led to cardiac arrest. 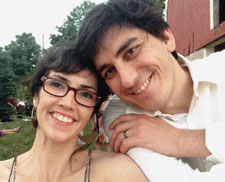 Susan had spent years trying to get pregnant. Her two little girls, Lucy and Reyna, were deeply wanted. After Susan was rushed to the hospital by ambulance, they lived just long enough for their father, Tim Caro-Bruce, ’98, to cradle them in his arms.

And then Susan and her babies were gone. Even to perfect strangers, the loss was staggering. To me, it felt impossible.

There must be some mistake, I reasoned unreasonably. I could still hear Susan’s loud, distinctive laugh. I’d smile, then remember, then feel like throwing up.

In the months that followed, I searched for meaning in a swirl of meaninglessness, reaching out to Susan’s friends and family to piece together her story. As I tried to understand her life’s journey, I also found myself trying to decipher the meaning of my own.

“DO THINGS THAT MATTER TO YOUR HEART.”
“LESS INTERNET, MORE LOVE.”
“ENJOY YOUR HAIR WHILE YOU HAVE IT.”
“IT WAS A GOOD CALL TO BUY THE RV.”

Over lunch one afternoon, her best friend and creative collaborator, Christina Amini, ’99, put words to what I was feeling: These days, Susan’s art was the only thing that made any sense at all.

Susan and I first became friends eating ice cream and practicing the Electric Slide during Wednesday-night hall meetings in our freshman dorm, Otero. When she laughed at my jokes, I felt like I’d won something.

Colleen McGarry, ’99, who lived down the hall from us, remembers walking by Susan’s room that year and spotting her sitting perfectly still and snapping photos of herself, decades before selfies became a thing. Susan gave Colleen one of the photos, signed: “To My #1 Fan.” 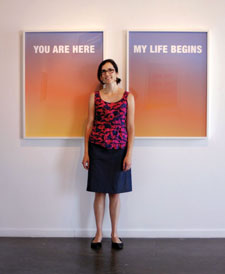 Susan had dreamed of being an artist since she was little, her older sister, Mara Boord, told me. But her parents had pooh-poohed the idea. “Artists make no money,” Mara remembers them saying.

By the time Susan got to Stanford, she didn’t talk about being an artist—“I still had the mind-set of doing things in a methodical way and doing things that made sense,” she’d say in an interview later. “Things that had a goal. That people thought were legitimate.”

I watched her try her hand at human biology, which didn’t seem to fit her. She finally settled on a major in urban studies. One afternoon toward the end of sophomore year, we sat on the steps of her co-op, Synergy. I mentioned my plan to spend the summer in El Salvador.

I studied her big brown eyes for signs of irony, and saw none.

“Why not?” she said. She thought I’d be a cool person to spend a summer with.

I was decidedly not cool. But not wanting to dissuade her, I stayed quiet about it.

We boarded the plane with only the outlines of a plan. For two months, we shared a bedroom in a small family home in San Salvador. We interned in vaguely corrupt nonprofit organizations, went to expat parties, danced awkward salsa and drank Cuba libres. She teased me mercilessly about a Salvadoran dental student who was writing me earnest poetry. With her encouragement, I wore crop tops for the first (and last) time in my life.

One afternoon, out in a rural Salvadoran town, Susan spotted a peluquería offering haircuts for $1.20. She barely paused before walking in.

“Short,” I helped translate. “She wants it short.”

Fifteen minutes into the cut, the stylist pulled out some clippers. Susan’s eyes widened. Just as the sides of her head were being buzzed, she called things off. A circle of long hair remained.

Back at our homestay, the family’s 5-year-old daughter gasped. “La Susan tiene una isla!” she said. “Susan has an island!”

A neighbor declared the cut unsalvageable. Soon Susan was on the stoop, laughing as the whole street watched her get her head shaved.

After we returned, I spent more time with Susan’s tight-knit Mexican-Irish family at their home in San Jose. I was particularly drawn to her mother, Lupita, and to her laughing, loyal knot of sisters. Even though there were plenty of beds in the house, Susan and her two younger sisters often preferred to snuggle on the same twin-size mattress.

Following graduation, I headed back to El Salvador, and Susan moved to New York City. Even as we drifted down different paths, I sometimes dreamed I was with Susan, Christina and their friends, traipsing around Central Park and crashing loft parties.

I visited with Christina at Café Leila in Berkeley a few times after Susan died—she and Susan’s husband, Tim, camped out there every Friday, sometimes joined by either Tim’s sister or one of Susan’s. They called it their “grief office hours.”

Christina had given the folks at Café Leila a framed copy of one of Susan’s prints: “LOVE IS EVERYWHERE. LOOK FOR IT.” They displayed it on the front counter. 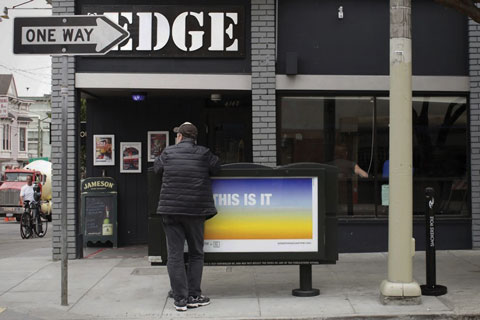 A public installation in San Francisco, part of the "Mantras for the Urban Dweller" series. (Photo: Courtesy The Thing Quarterly)

One morning, a mothers’ group took over the table next to ours. A dozen women began nursing their new babies, their delighted innocence almost too cruel to stomach.

Christina told me that Susan’s first job in New York was as an administrative assistant for a start-up. It required very little work, so Susan spent a lot of her time sending Christina instant messages featuring long strings of emoticons. That job, and her next, a better-paying position at an advertising firm, felt empty to her.

“What are you waiting for?” Christina finally asked. The next day, Susan quit.

She sent an email telling friends she was moving home to San Jose to live with her mom and take art classes. “I want to go back to my eighth-grade dream of being an artist,” she wrote. “Because if I don’t do it now, then when will I?”

I asked Christina if Susan had been scared when she made that first leap toward becoming an artist. Yes, Christina said: “What bravery is, is if you do something and you’re afraid.”

As our undergraduate days receded into the distance, Susan and I saw each other only intermittently. I made cookies for her wedding in August 2009. She baked cupcakes for mine a month later.

We met occasionally for dinner or brunch. But I regret that I observed much of her art career unfolding virtually—over Facebook and email. As I read announcements of her new exhibitions and residencies, I marveled at her ability to follow her muse.

I remember arriving late to one of her exhibition openings, in San Francisco. I spotted her sisters and some mutual friends, but couldn’t find Susan. She had left early to take her mother home.

In 2009, not long after she had danced at Susan’s wedding, Lupita began a downward slide. She was diagnosed with multiple systems atrophy, a cruel neurological disease that robbed her of her ability to walk and live independently. 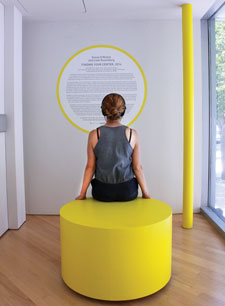 In a series that was among her proudest creations, Susan had her mom write down—in her strained, shaky hand—advice she wanted Susanto remember. “If it takes more energy to frown than be happy,” Lupe wrote, “trick your brain and smile.” She died in January 2014.

I visited Susan’s youngest sister, Sharon Figueroa, at her apartment in North Oakland a few months after Susan’s death. She was holding her new baby, Maya Susanna. I noticed on the living room wall another print Susan had worked on with their mom. “I love you baby,” it said.

“My mom loved it,” Sharon said, following my gaze. “My sister drew out my mom’s strengths at a time she needed to be reminded of them.”

Several people, Sharon included, told me Susan created such hopeful work in part because she herself needed encouragement. Her mother’s illness was devastating. And, at the same time, she longed to be a mom herself and was disheartened by how hard it was proving.

After Lupita’s funeral, a few of us, Susan included, had made a date to meet at Children’s Fairyland in Oakland. When I look back, my stomach sinks at our choice of venues. Fairyland was crowded with children that day, my own daughter included. Susan soon left in tears.

Pregnant again myself, I struggled with how to tell Susan, but she reacted with characteristic warmth. My daughter had nicknamed her brother-to-be “Baby Cherries”—Susan showed up at the baby shower with a cherry pie.

Not long after, she sent me an instant message: She was pregnant. With twin daughters.

She and Tim had purchased a home in Berkeley. She had the book of her work coming out.

“It’s all happening,” Tim remembers them telling each other: 2015 was going to be their year.

The last time I saw Susan was shortly after my son was born, in late 2014. She came over bearing sandwiches and bean soup. Her pregnant belly looked cute and unwieldy on her skinny frame. We talked more openly than we had in years. About our parents. About our children. I promised to bring dinner and baby clothes when the time came.

Mourners at Susan’s memorial service at Montalvo Arts Center were instructed to wear bright colors. We did jazz fingers, ate cupcakes and yelled her name at the top of our lungs. We followed a path through the trees marked with wooden signs Susan had created. She had called the installation “A Healing Walk.” 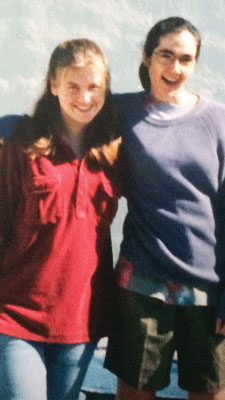 “You are here,” reminded one sign, “awake and alive.”

Soon after, friends in the art community spearheaded an effort to print thousands of Susan’s “It Will Be More Beautiful Than You Could Ever Imagine” posters. Put some hope out in the world, they said. That’s what Susan would do.

The posters appeared in a phone booth in London. Pinned to a redwood tree. At Facebook headquarters. On a merry-go-round. In offices and cafés and homes all over the Bay Area. And in my front window.

One evening, my cousin, Abby, came to my house and noticed the poster. She had received a greeting card with the same image after a traumatic car accident a few years earlier, she told me. The card had become a sort of talisman, and she took it with her everywhere.

“Where did you get that?” she asked.

Jocelyn Wiener, ’99, is a freelance writer based in Oakland.

Huge advances in virtual reality are challenging the nature of experience. Get ready—you may not believe your eyes.