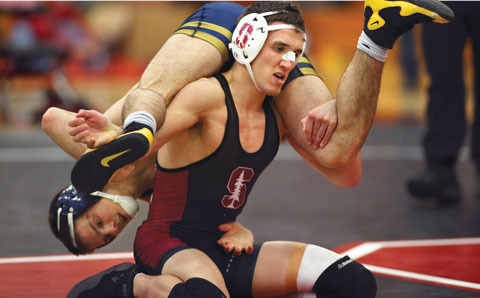 For the uninitiated, wrestling is one of the “weird” sports. Sure, it makes much more sense after just a bit of education about it. But first impressions can be brutal. Stanford coach Jason Borrelli is always braced, for instance, for people who start a conversation about wrestlers wearing “onesies.”

They mean singlets, the tight-fitting, one-piece uniforms. And the outfit is just a symbol of greater strangeness. There’s also the arcane vocabulary, such as “riding time” (time recorded for controlling opponents on the mat). Perhaps most disconcerting are the contortionist clenches that give the impression that the athletes are trying to yank each other apart like wishbones.

It leaves Borrelli with a double challenge: Excel and sell. Build the program competitively and make it fan-friendly. “I’ve been working hard to fight the stigma,” he says.

There’s a lot of progress to point to—Maples Pavilion was about half full in November for a battle with No. 1-ranked Penn State—and he’s proud of it. But while Borrelli is thinking about this season, he’s simultaneously foreseeing the season in which Stanford wins the national championship, and imagining a yet-to-be-arranged “Rumble on the Rock” that would showcase wrestling on Alcatraz.

At press time in February, Stanford was 10-3 overall and ranked 18th nationally in the InterMat poll. Freshman Joey McKenna was rated No. 2 in the country in his 141-pound weight class. 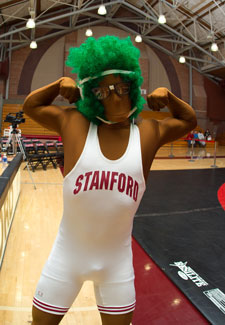 Borrelli is in his eighth season as head coach at Stanford. An 11th-place finish in the NCAA championships in 2011 was followed by 16th place in 2012—the first back-to-back top-20 results in school history. A 17-5 mark in dual meets in 2014 broke a 39-year record for wins in a season.

Now add context: Borrelli notes that Cornell and Stanford were the only top-20 finishers in 2011 and ’12 without the full Division I allotment of 9.9  athletic scholarships. Stanford had 3.5 (now 4.5); Cornell had none, per Ivy League rules. Still, his emphasis is on values—“six pillars,” as he calls them—integrity, passion, positive atttitude, hard work, family and sacrifice. That, he says, is what he’s really selling.