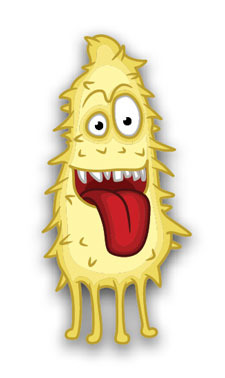 It’s like something from a horror movie, a grotesque, slithering threat to civilization. But it appears so ordinary upon casual inspection. What is this thing? Brace yourself. It’s the sleeve of a doctor’s white coat.

After a Virginia doctor suggested that the seldom-laundered work apparel at his hospital amounted to germ farms, a flurry of media attention followed. And ever since, Charles Prober has been getting questions about it.

Prober, senior associate dean for medical education at the School of Medicine, is an expert on pediatric infectious diseases. So, is it true that crud from contaminated white coats could be transferred to patients? It can be a problem, says Prober, but the peril is mostly concentrated in highly susceptible groups—newborns in intensive care and bone-marrow transplant patients, for instance.

“The white coat and the stethoscope and everything else we carry around is not a risk for normal day-to-day patient care,” notes Prober.

Where there is substantial risk, physicians simply have to ditch the coats, roll up their sleeves, wash up or perhaps don gowns. Laundering the rarely removed coats isn’t a bad idea, either.

Huge advances in virtual reality are challenging the nature of experience. Get ready—you may not believe your eyes.