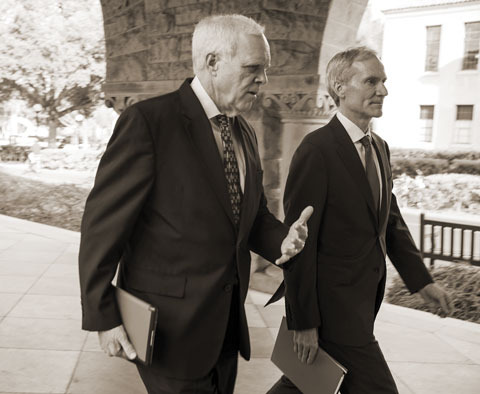 The announcement in February that Stanford’s next president will be Marc Tessier-Lavigne introduced the university community to a pioneering neuroscientist and acclaimed educator, as well as an administrator and entrepreneur of imposing experience.

But perhaps as significantly, the discussion about his unanimous selection by the Board of Trustees brimmed with references to his talents as a listener, as a coalition builder, and as a collaborator and mentor. He “understands that a university makes progress by working as a community together,” said Kathryn Moler, ’88, PhD ’95, a professor of physics and a member of the presidential search committee.

Tessier-Lavigne, president of The Rockefeller University in New York City since 2011, will succeed John Hennessy on September 1. A former professor of biological sciences at Stanford (2001 to 2005), he will be the university’s 11th president.

“My first task,” noted Tessier-Lavigne, 56, “will be to meet with every segment of the campus community, to listen and to learn, to immerse myself in the culture and to seek to understand the opportunities and challenges facing the university, and to hear your aspirations.”

A native of Canada and the first person in his immediate family to attend college, Tessier-Lavigne received undergraduate degrees in physics from McGill University and in philosophy and physiology from Oxford University, where he was a Rhodes scholar. He earned a PhD in physiology from University College London and performed postdoctoral work there and at Columbia University.

He is a former professor of anatomy, and biochemistry and biophysics, at the University of California, San Francisco, and was recruited to the Stanford faculty by Hennessy. A portion of his appointment at Stanford was spent on leave at Genentech, where he advanced to executive vice president for research and chief scientific officer, overseeing 1,400 scientists engaged in projects that included drug discovery for cancer, immune disorders and neurodegenerative diseases.

Tessier-Lavigne has continued to pursue research during his years directing organizations, looking into the cause and treatment of diseases such as Alzheimer’s and Parkinson’s. In 2015, he co-founded the South San Francisco-based biotech firm Denali Therapeutics to develop drug therapies for neurodegenerative diseases. He previously co-founded Renovis, a neuroscience startup that was later acquired by Evotec, a German firm.

At a press conference that followed the announcement of his selection by Stanford, he commented that his “reverence is highest for the great research universities that have had an outsized impact in accelerating the progress of civilization. . . . Stanford is one of these universities.”

Steve Denning, MBA ’78, chair of the Board of Trustees, sounded the same theme, extolling Tessier-Lavigne for “a lifetime immersed in leading initiatives to develop knowledge for the benefit of humanity.”

An outspoken proponent of liberal arts education, Tessier-Lavigne also made a point of addressing the culture he wants to support and foster, namely, “an inclusive campus community that is as rich and diverse as our academic enterprise.

“At universities across the nation, we’re witnessing renewed and appropriate focus on issues including the health of our environment, inclusion and diversity, sexual misconduct and assault. The university must strive to lead on these issues and be responsive to student concerns while remaining true to the core values and mission of the university.”

Grew up: Moving around Canada and then Europe in “a typical Canadian Army family.” Attended school in London and Brussels.

Family: Married to Mary Hynes, a neuroscientist and former senior research scientist in Stanford’s department of biology (2003 to 2011). They have three children.