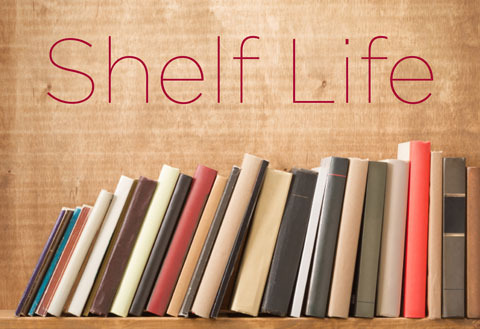 Into the Magic Shop: A Neurosurgeon’s Quest to Discover the Mysteries of the Brain and the Secrets of the Heart, JAMES R. DOTY; Avery, $26. Stepping into the Cactus Rabbit Magic Shop in Lancaster, Calif., 12-year-old Jim Doty couldn’t have known that the woman inside, Ruth, would eventually send him back out into the world with an unusual kind of magic: exercises to help him open his heart, calm his mind and turn his desires into reality. Now a neurosurgery professor at Stanford and the director of the Center for Compassion and Altruism Research and Education (CCARE), Doty shares how Ruth’s gift to him not only helped him get through his turbulent youth and into medical school, but also set him on a surprisingly joyful path—one that pointed away from many things he’d always thought he wanted.

Sing your sore-throated robin’s song
Claiming the upper branches of an oak tree.
All the times I’ve given my heart to your scarlet—
Remember? Your flying red kiss always too far from my
Lips. You flit in and out of sunlight, brilliant and drab,
Emotionally indifferent to my worship below,
Then dart off to your next perch, leaving
The vireo to sing its own off-note robin’s song,
A languid complaint: Here I am, where are you?
Not here, not there, not after your scarlet rips
Away the solitary green comforts of my woods walk, the
Goodbyes I can’t bring myself to say.
Every spring I savor my first scarlet sighting, a
Ravishing reminder of beauty too wounding to heal.

Mendocino Fire: Stories, ELIZABETH TALLENT; HarperCollins, $24.99. Stanford English professor Tallent’s characters, be they university professors, small-town laborers or tree-hugging activists, tend to indulge their impulses and ponder the consequences later—fighting the fire of the book’s title, perhaps. Love, loss and the pain of intimate relationships figure prominently in this collection of 10 stories, strongly conveyed by the author’s deft portrayals of her protagonists’ innermost thoughts.

American Hippies, W.J. RORABAUGH, ’68; Cambridge University Press, $24.99. How did hippies happen? Rorabaugh discusses how American youth fled from a Fifties culture they found stifling into a world of their own that celebrated individualism—or so they hoped. A fascinating look at the storied counterculture in its heyday, as well as how various hippie ideals continue on through the present day, told from a fresh perspective.

“But who else in American politics would be so audacious as to have one spouse accept money from foreign governments while the other charted American foreign policy?”

Who Gets What—and Why, ALVIN E. ROTH,  MS ’73, PhD ’74; Houghton Mifflin Harcourt, $28. Roth, a co-recipient of the 2012 Nobel Prize in economics and a Stanford economics professor, discusses the “rules” of matching markets, or those in which who gets what is determined by factors other than money. Understanding how matching markets work can help people make more efficient decisions within them, Roth says, whether applying to medical school or looking for a parking spot.

Eligible, CURTIS SITTENFELD, ’97; Random House, $28. Sittenfeld’s modern-day take on Jane Austen’s Pride and Prejudice has the Bennet family in Cincinnati, with two sisters having left their lives in NYC behind only to find house and home in shambles. Sisterly banter and gossipy squabbles keep the story rolling as Mr. Bennet recuperates from the health scare that reeled his daughters back to Ohio, Mrs. Bennet frets over pairing off her daughters (or at least Jane, nearing 40), and male suitors belie their first impressions.

Tile Makes the Room: Good Design from Heath Ceramics, ROBIN PETRAVIC, MFA ’97, and CATHERINE BAILEY; Ten Speed Press, $40. With color, form and texture at play, tile can be a defining element; in use, it rises above its earthy origins while bringing a grounded feel to a room. The authors, co-owners of Heath Ceramics, showcase examples of tile used in spaces large and small while discussing the elements of good design. Also included is information about glazing, firing and public tile installations.

Art in the Blood: A Sherlock Holmes Adventure, BONNIE MacBIRD, ’73, MA ’74; HarperCollins, $25.99. Emmy-winning screenwriter and film producer MacBird revives the Baker Street duo in a plot featuring a missing child, orphan abuse, a love triangle and art theft on a monumental scale. The historical context rings true—Henri de Toulouse-Lautrec makes an appearance—as does the dialogue, except, arguably, when Holmes calls for “Data! Data!” and extols “mindfulness” as his cocaine substitute. A sequel is due in September.

Young Ovid: A Life Re-created, DIANE MIDDLEBROOK; Counterpoint Press, $25. English professor Middlebrook’s project to tell the life story of the Augustan-era Roman poet was cut short by her death in 2007; her “unfinished biography” covers just 46 of Ovid’s 74 years. But that gap pales in the face of another gap: the dearth of documentation on her subject. The author’s solution was to create insightful, imaginative episodes in Ovid’s life informed by and interspersed with history and his own poetry.

The Madwoman Upstairs, Catherine Lowell, ’11; Touchstone Books, $25.99. In this debut novel, Lowell takes on the motif of the Victorian madwoman in the attic, complete with intractable heroine Samantha Whipple, the last living descendant of the Brontë family. When Samantha enrolls at Oxford, her father’s heavily annotated copies of the Brontë novels begin to appear in her room; the ghostly books that should have been destroyed in the fire that claimed his life are clues in an elaborate scavenger hunt Samantha hopes will lead her to her family’s rumored secret estate. It’s an engaging literary mystery filled with juicy speculation about the life of the Brontës—a delightful reminder that how we read fiction matters.

Believe Your Ears, KIRKE MECHEM, ’51; Rowman & Littlefield, $65. In this new memoir by the “dean of American choral music,” Mechem recounts his atypical path into the world of music, his run-ins with everyone from Aaron Copland to the Grateful Dead, and how he developed his personal philosophy that listeners ought to follow their own ears.

Battle Rattle, ROGER BOAS, ’42; Stinson Publishing, $15. As a forward operator in World War II, Boas was on the frontlines as the Allies pushed their way across France and deep into Germany. In this memoir, published some 70 years later, he recalls his experience and reflects on the many ways war changed him forever.

Marked for Death, TIMOTHY OLIVER STOEN, JD ’64; CreateSpace, $19.95. After seven years as an attorney for James Jones’s Peoples Temple movement, Stoen became disillusioned and rejected the group. What followed was a custody battle for his 6-year-old son, who would become one of nearly 1,000 people murdered in the Jonestown Massacre.

The Mushroom at the End of the World, ANNA LOWENHAUPT TSING, MA ’76, PhD ’84; Princeton University Press, $29.95. The Matsutake mushroom is a culinary delicacy, pungent forest weed, and the first thing to grow back after the nuclear destruction of Hiroshima. Tsing traces the curious history of this fungus, while asking a broader question: “What manages to live in the ruins we have made?”

The Sound of Innovation, ANDREW J. NELSON, BA ’97, PhD ’07; The MIT Press, $34. Many people think of Stanford in the 1960s as a hub of computer innovation; fewer recognize what an impact it had on the world of electronic music. As he challenges the boundaries between art and science, Nelson shows how an interdisciplinary group of researches paved the way for the digital music revolution.

Adrift, DAVID T.K. WONG, BA ’52, MA ’53; Epigram Books, $19.73. In the first part of his multi-volume family memoir, Wong revisits his international childhood—born in Hong Kong, raised in Singapore, and exiled in Australia—in the last years of colonialism, all the while asking: Where does a person like him belong?

Fiascos, DAVID T.K. WONG, BA ’52, MA ’53; Epigram Books, $19.73. The second volume in his family memoir, Fiascos begins with Wong’s time as a refugee in Australia, and follows him across the ocean to Hong Kong, where he spent his turbulent teenage years.

God, Modality, and Morality, WILLIAM E. MANN, ’62, MA ’64; Oxford University Press, $74. The Euthyphro dilemma, which questions the relationship between the moral and the divine, is one of the oldest puzzles in all of human thought. In 17 essays, Mann lays a new framework for addressing the problem: not questioning whether God exists, but rather how and why.

How Aging Works, JOHN F. MURRAY, ’49, MD ’53; Page Publishing, $33.95. Drawing on a background as a physician and professor of medicine at UC-San Francisco, Murray offers a frank look at the biological processes involved in growing old, along with practical recommendations for how to live longer and healthier.

Cora DuBois, SUSAN C. SEYMOUR, ’62; University of Nebraska Press, $39.50. Her name may be relatively unknown outside the field of anthropology. But DuBois, Harvard’s first tenured female professor and an important mind in 20th-century history, receives the attention she deserves in this new biography.

The Hidden Half of Nature, DAVID R. MONTGOMERY, ’84, and ANNE BIKLÉ; W.W. Norton & Company, $26.95. When many people hear the word “microbes,” their first association might be “germs” or “disease.” But this married scientist duo reframes the conversation about the little organisms, showing how they’re the biological foundation of everything from agriculture to human health.

A World of Work, edited by ILANA GERSHON, ’93; Cornell University Press, $19.95. Why do professional French magicians call each other magicos, not magiciens? If you’re a doctor in Malawi, how do you get more use out of rubber gloves? How do people become professional wrestlers in Mexico? This amusing collection of “imagined manuals for real jobs” offers these insights and more.

Mothers, Daughters, Sisters, Wives, KAREN ROSENBAUM, MA ’64; Zarahemla Books, $14.95. In a new collection of 14 short stories, four Mormon women grapple with their faith, their families and life in the American West. Although they are separated by mountains and deserts, “they share a common birthright. They are sisters.”

Plato’s Rivalry with Medicine, SUSAN B. LEVIN, PhD ’93; Oxford University Press, $69. Modern bioethics and ancient philosophy may seem like curious bedfellows, but in this careful analysis of Plato’s writings, particularly the Laws, Levin shows how he may still have something to teach the world about medical ethics, and the relationship between medicine and society.

The Roots of Goodness and Resistance to Evil, ERVIN STAUB, PhD ’65; Oxford University Press, $59.95. Why do some people live as bystanders while others stand poised to leap into action? Staub examines the “socializing experiences, education, and trainings” that develop our moral character and ultimately underpin society.

World War I Army Training by San Francisco Bay, BARBARA WILCOX, MLA ’15; The History Press, $21.99. Stanford played an important part in the First World War when it leased some of its land in Menlo Park to build Camp Fremont, a military training base. The story of Camp Fremont is also one of Stanford, the Bay Area, and the Western U.S. as they entered the modern era.

The Strong Gray Line: War-Time Reflections from the West Point Class of 2004, CORY WALLACE; Rowman & Littlefield, $30. Jim Wilson, MBA ’11, and Tim Hsia, JD/MBA ’13, are among the contributors to this collection of memories and essays by members of the West Point class that has suffered the highest casualty rate since the Vietnam War. With its well-told and deeply personal stories, the book offers an insider’s view of the unbreakable bonds formed at West Point and on the battlefront.

High-Stakes Schooling: What We Can Learn from Japan’s Experiences with Testing, Accountability, & Education Reform, CHRISTOPHER BJORK, PHD ’00; University of Chicago Press, $30. Bjork provides a ground-level view of the “relaxed education” movement’s effects on the Japanese education system. Drawing on a yearlong study, the author, a professor of education at Vassar, draws parallels to issues currently facing U.S. schools.

Words to Live By

Her shocking death left us bereft, but her art continues to inspire.