In 1956, Dwight Eisenhower received 40 percent of the black vote in winning reelection to the White House. A year later, overwhelming Republican support overcame determined Democratic opposition in Congress, resulting in the passage of the Civil Rights Act of 1957, the first piece of federal civil rights legislation since the end of Reconstruction. And yet, just 12 years later, Richard Nixon, running on his “Southern strategy,” claimed the White House with just 3 percent of the black vote. How did the “party of Lincoln” go from its moderate/liberal stance on civil rights in the postwar era to the origins — under Nixon — of today’s GOP: overwhelmingly white and disproportionately Southern?

For exactly 100 years — from Lincoln’s election in 1860 to JFK’s victory in 1960 — the regional structure of American politics was remarkably stable. The white South’s abiding hatred of the party of Lincoln made the states of the former Confederacy the electoral foundation of the Democratic Party. So important was the region to both the electoral and legislative fortunes of the Democrats that even after the rise of the northern, liberal, labor wing of the party in 1932, party leaders remained committed to accommodating the racial “sensibilities” of the region. By contrast, while hardly the radical abolitionists of the 1860s and 1870s, the Republicans on the eve of the 1960s remained significantly more liberal on race than the Democrats.

In the 1960s, two linked social movements powerfully reshaped America in ways that still reverberate today. The first of those struggles was the civil rights movement. Beginning with the sit-ins in 1960, the movement put unrelenting pressure on two Democratic administrations — Kennedy’s and Johnson’s — to put America’s racial house in order. Under that pressure, both presidents and, by extension, the Democratic Party moved sharply left on the issue of race and on other social issues (e.g., Vietnam, the environment, women’s rights) over the course of the decade. 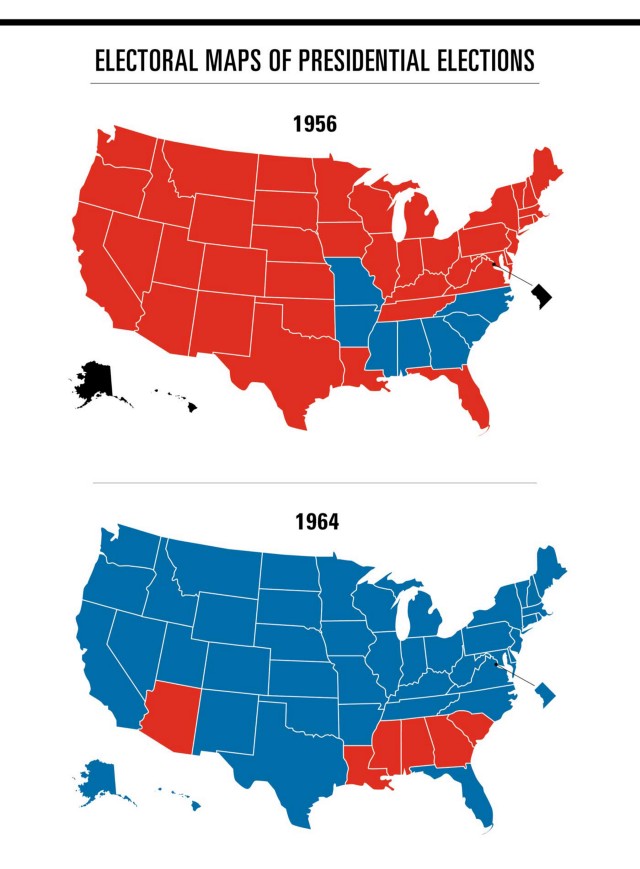 Angered by Johnson’s embrace of civil rights reform, the “solid South” abandoned the Democrats for the first time in 1964. The white South’s electoral response to Johnson’s action was just one small part of the second movement alluded to above — the “white backlash” to the civil rights movement. While we think of such resistance as a Southern phenomenon, the backlash of the 1960s was, in fact, a national countermovement. And it was that pressure, or more accurately the political opportunity afforded the GOP, that began to shift the party steadily to the right on matters of race. No one embodied this conservative shift in policy more than Nixon himself. As a congressman from California, Nixon had compiled an impeccable civil rights voting record. During his first term as president, however, he proposed doing away with the key “preclearance” provision of the Voting Rights Act, sought to grant school districts greater latitude in conforming to desegregation orders and named two extreme racial conservatives to fill a Supreme Court vacancy.

Nixon’s actions between 1968 and 1975 marked the beginning of a process of racial and regional realignment that has continued to the present. Central to the process has been the sustained pressure of a series of racially inflected conservative movements over the past 50 years that has continued to move the party ever further to the right. Trumpism is only the most recent — and extreme — of those movements.

Doug McAdam is the Ray Lyman Wilbur Professor of Sociology, Emeritus, and a former director of the Center for Advanced Studies in the Behavioral Sciences.

Read Part 7: Who I Am — the Role of Identity in Modern Politics