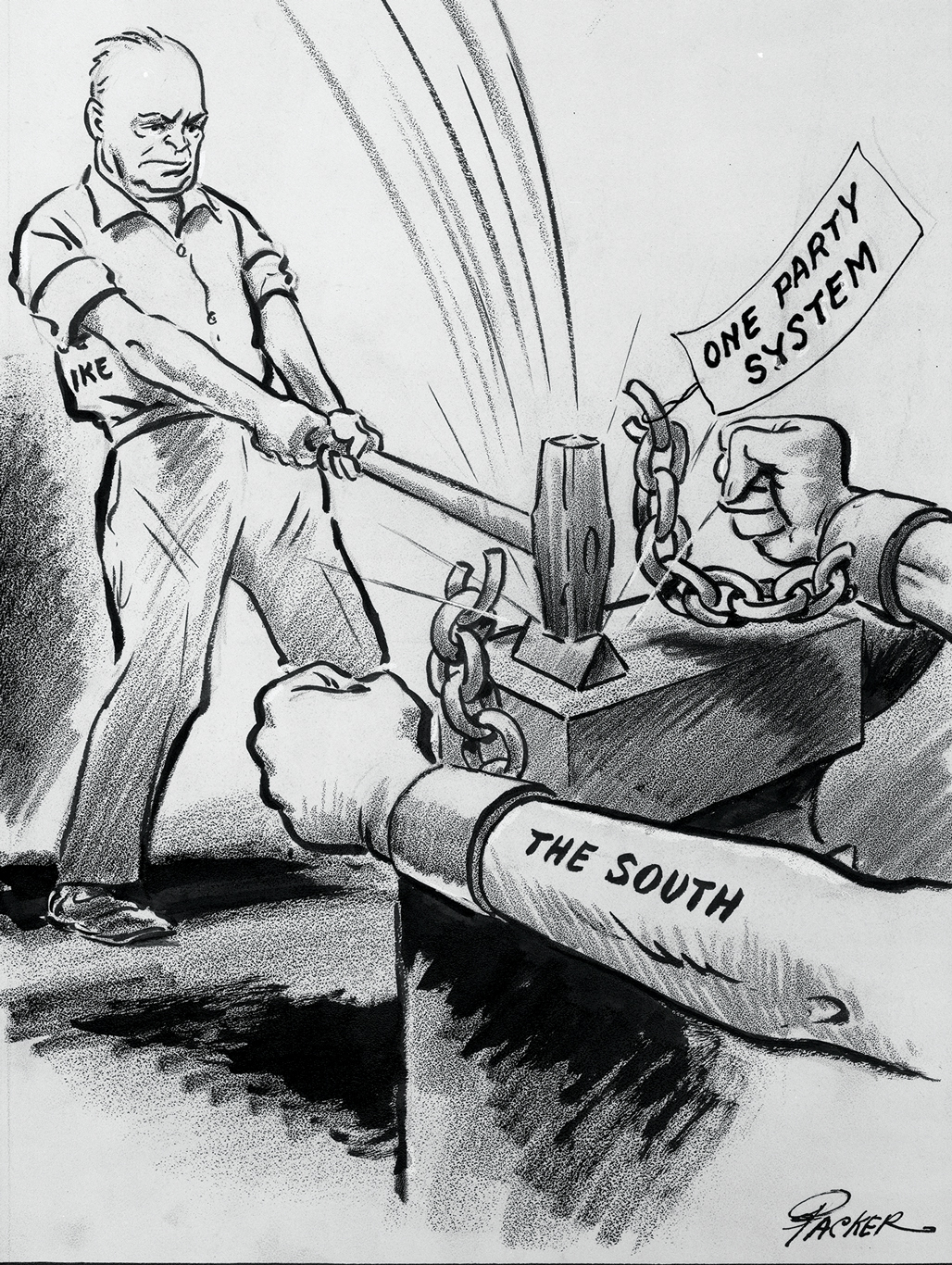 'THE NEW EMANCIPATOR!’: In this 1952 cartoon, President-elect Eisenhower smashes the century-old tradition of a solid South. Image: Fred Packer Little/Library of Congress

'THE NEW EMANCIPATOR!’: In this 1952 cartoon, President-elect Eisenhower smashes the century-old tradition of a solid South. Image: Fred Packer Little/Library of Congress

When journalists and pundits write about or mention polarization, they do not normally make distinctions about who is polarized: members of Congress, political party elites or average Americans. Nor do they distinguish between different intensities of polarization.

Polarization among the political elite is not new. Delegates to the Democratic and Republican conventions in 1952 and 1956 were far apart on issues. This separation in the 1950s is striking because this era is generally viewed as a halcyon period of politics, when Americans thought of themselves as Americans first and Democrats and Republicans secondarily, as proved by the large numbers of Democrats defecting to vote for Eisenhower twice for president. In spite of this harmony, Democratic and Republican elites differed on agricultural assistance, ownership of public utilities, business regulation, federal aid to education and Social Security payments, among other issues.

Partisan voting in Congress is the historical norm rather than the exception.

The only period when there was extensive overlapping voting (some Democrats and Republicans voting together) began before World War II and continued until the mid-1970s. In this era, a conservative coalition of Northern Republicans and Southern Democrats was active across a wide range of policy, thus decreasing party polarization in the House and Senate. The Conservative Coalition formed over the Fair Labor Standards Act during the Roosevelt administration; Republicans were generally opposed to stricter labor standards, and Southern Democrats opposed them because their only economic advantage was that their states were nonunion and thus had cheaper labor. Over time, this coalition of common interests voted together on other issues, such as civil rights, agricultural assistance and foreign policy.

Even in our present polarized Congress, Democrats and Republicans cross over much more often than do members of the French National Assembly or the British Parliament. Indeed, the budget deal of early February passed the House of Representatives with 73 Democrats voting yes with the Republican majority and 67 Republicans voting no with a majority of Democrats, while the Senate bill passed with 36 Democrats and 35 Republicans voting yes. Nevertheless, it is true that polarization among activists and elected members of representative bodies in the United States has increased since the early 1970s, as the parties have sorted (see Part 3: Polarization Is Not the Problem) and the Conservative Coalition has lost influence.

In the long run, parties that do not please the electorate either change their behavior or fade away.

Given that polarization has long been present in America, what is the problem? If differing preferences preclude political leaders from interacting, then there is trouble. Consider Gladstone and Disraeli in 1860s Britain, American presidents Jefferson and Adams, or senators Lyndon Johnson and Everett Dirksen: All disagreed but kept their conflicts in the realm of policy differences. Today, when 44 percent of Democratic identifiers and 45 percent of Republican identifiers say they have a “very unfavorable” view of the opposing party, it seems clear that the polarization is intense and problematic.

David Brady is a professor of political economy at the Graduate School of Business, the Davies Family Senior Fellow at the Hoover Institution and a senior fellow at the Stanford Institute for Economic Policy Research.

Read Part 5: Is Social Media to Blame? Not Likely