Both public discussion and academic studies have suggested that deepening political divisions in America may be linked to the rise of the internet and social media. For example, discussing the role of social media in the 2016 election, President Barack Obama said, “The capacity to disseminate misinformation, wild conspiracy theories, to paint the opposition in wildly negative light without any rebuttal — that has accelerated in ways that much more sharply polarize the electorate.” Such speculation has grown as more and more evidence has come to light about the extent of misinformation and Russian interference online.

Establishing to what extent digital technologies cause polarization is challenging, and I am not aware of any study that really answers this with either a randomized or natural experiment. Short of this, however, we can get some traction on the question by looking at simple descriptive facts. In a recent paper published in Proceedings of the National Academy of Sciences, my co-authors and I ask a simple question: Which demographic groups have seen the biggest increases in polarization, and to what extent are they the same groups that use social media at high rates? We find that, in fact, polarization has increased the most among the groups that use social media the least.

In fact, polarization has increased the most among the groups that use social media the least.

To measure polarization, we use survey data from the American National Election Studies. We construct eight measures of political polarization that have increased in recent years. Examples include affective polarization (a measure of how warmly or coldly each side of the political spectrum feels about the other), straight-ticket voting (the share of individuals voting uniformly for a single party within an election) and issue consistency (the extent to which individuals’ views on issues are consistently liberal or consistently conservative). We aggregate these measures into a single index. We then look at the trends in this index for different demographic groups. While we look at many demographic dimensions, the most informative is age. Age is a very strong predictor of social media use, with more than 80 percent of 18- to 39-year-olds reporting using social media in 2016, compared with less than 20 percent of those 75 and over. These figures are the share who ever use social media; the share of elderly Americans using social media regularly or as a primary source of political information is presumably even smaller. 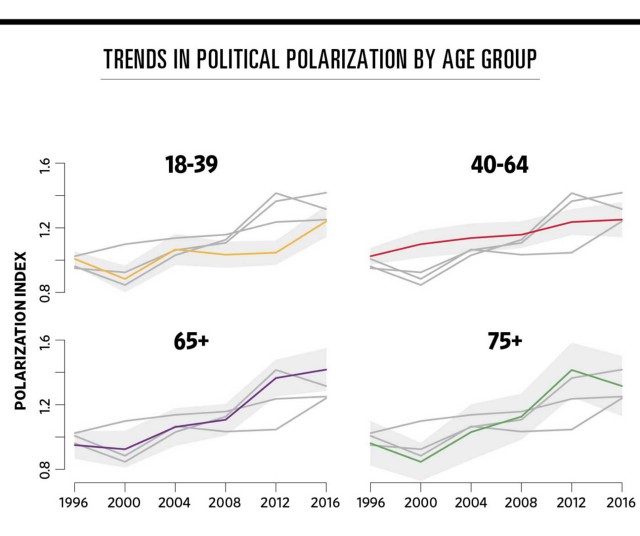 If social media were driving polarization, we would expect polarization to have risen much more among 18- to 39-year-olds than among those 75 and over. Our research shows that this is not the case. In fact, polarization has increased as much or more among the elderly.

Nevertheless, we think the balance of the evidence suggests a role for social media that is smaller than the popular discussion might imply.

Matthew Gentzkow is a professor of economics. This essay is based on “Greater Internet use is not associated with faster growth in political polarization among U.S. demographic groups,” by Levi Boxell, Gentzkow and Jesse M. Shapiro, which appeared in October in Proceedings of the National Academy of Sciences.

Read Part 6: What Happened to the Party of Lincoln?