Lisa Joy was a lawyer with a high-paying consulting job when she got the phone call that changed her life.

LIVING WITH JOY: “There’s something to be said for just doing the thing that you love and carrying on with it step by step,” Joy says. 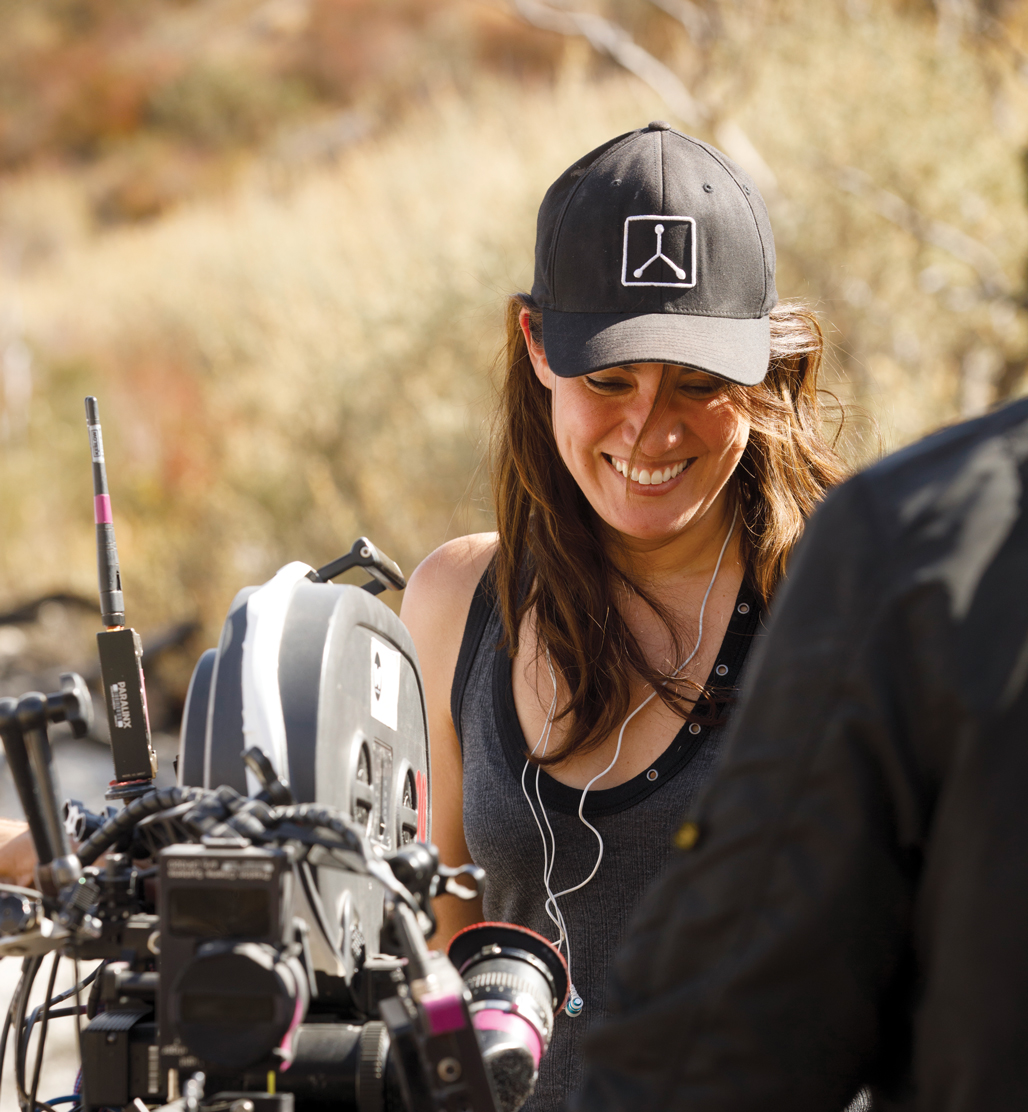 LIVING WITH JOY: “There’s something to be said for just doing the thing that you love and carrying on with it step by step,” Joy says.

Mr. Bubbles offers a window into the life of Lisa Joy. The blue-and-green Siamese fighting fish lives in a two-story fish-tank condo built into the desk in Joy’s Hollywood office. He is constantly in motion, his colorful fins swirling behind him. He looks great. And he’s used to people watching him, awaiting his next spectacular move.

One could say the same about Joy, ’99, a Stanford English major, Chinese minor and Harvard Law School grad. Joy is the co-creator, executive producer and director of the HBO blockbuster Westworld, now in production on its third season. The sci-fi western, based on Michael Crichton’s 1973 film of the same title, is set in a nightmarish theme park populated with robot hosts, where human guests can live out their most extreme (often violent) fantasies with impunity. As one breathless fan put it on Reddit, “Imagine a world where anything and everything was possible. A wild, wild West where the only limit was yourself.”

Through a series of impossibly complicated plotlines, Westworld explores the dark side of human behavior and raises disturbing ethical questions. How do people act when they know they won’t be judged?
Is it wrong to harm an insentient being? (How about a robot on the verge of becoming sentient?) The show’s uncomfortable contemporary relevance has struck a chord: An estimated 13 million people watched season one, putting Westworld on par with HBO’s centerpiece, Game of Thrones.

“The series tackles anxieties about what happens when technology goes awry or when engineers play God,” says Kara McCormack, an assistant professor of American culture and literature at Bilkent University in Turkey and a former Thinking Matters Fellow at Stanford. “This trope has resonated with audiences since as early as Mary Shelley’s Frankenstein.”

The irony of Joy’s success with the hit show is not lost on her. As a child, she wasn’t allowed to watch TV; she didn’t even own a television until after she graduated from Stanford. She grew up in suburban New Jersey, raised by a Taiwanese mother and British father who instilled in their two daughters a strong work ethic and encouraged them to prioritize stability and financial security.

At 5, Joy remembers being enthralled by a poem on the radio—the first one she’d ever heard. By the time she was a teenager, writing had become her passion. Her admissions essay to Stanford was a poem.

“The idea of going to Stanford was kind of like Harry Potter at Hogwarts,” she recalls. “Getting into Stanford was the first time that I felt like the vast expansiveness of the world might be something I could touch a tiny corner of.”

Once Joy enrolled, she remembers being acutely aware that there was no financial net and nobody else to pay off her student loans. She continued to write but says it felt like hubris to dream of being a professional writer. She eschewed creative writing, in part because she was too shy to share her work with “all those ferocious intellectuals,” but also because she felt she had to be practical. She sought out internships where she could learn about business and technology, and imagined her future as “writing little poems in the evening” and creating spreadsheets and financial models by day. “I knew poetry wasn’t going to pay the bills,” she says. 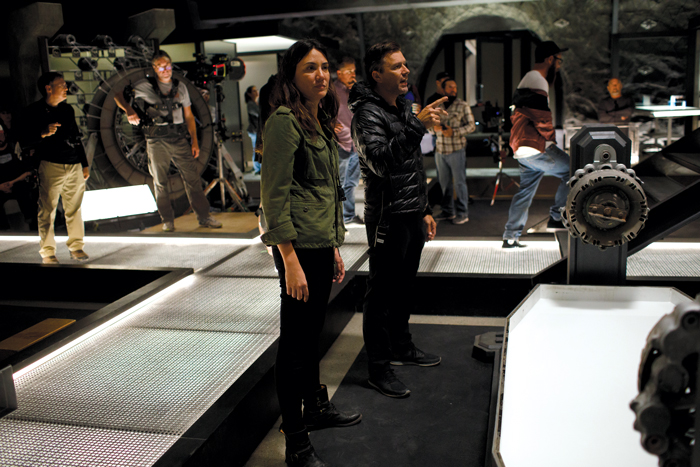 ALL QUIET ON THE WESTERN FRONT: Joy with stunt coordinator Brian Machleit on the set in Los Angeles.

After graduating, Joy landed a job as a consultant at the global consulting firm McKinsey & Co. The firm paid for her to attend Harvard Law School. As she prepared to leave for Cambridge, her now-husband (and Westworld’s co-creator), Jonathan “Jonah” Nolan, gave her a gift certificate for screenwriting software to encourage her not to give up on her passion. She didn’t.

While studying for the bar in 2007, Joy wrote a spec TV script for the teen drama Veronica Mars. “Other people do yoga or jog,” she says. “I wrote. That’s how I had fun.” A former Stanford classmate passed the script on to an ABC executive. Joy was at McKinsey’s office in San Francisco when she got a phone call. A producer from ABC’s hit series Pushing Daisies was on the line, offering her a staff writing position.

Joy told the station she could wrap up her work as a consultant and start in a few months. They responded that if she wanted the job, she had to start the next day. Joy took the leap, leaving behind the security and salary she’d worked so hard to achieve. When she called her mother to tell her what she’d done, she made sure to highlight the fact that the new job included health insurance.

When asked if she considers herself brave, Joy responds, “Brave, with a net.”  Every year she renews her membership in the California Bar Association, just in case this Hollywood thing doesn’t work out. “I am very risk averse in my pursuit of such a risky profession,” she laughs. But it would be hard to argue that her risks haven’t paid off. In April, Joy, Nolan and their independent film and TV company, Kilter Films, signed a deal with Amazon Studios to create and produce an original series for Amazon Prime. They’ll continue their work on Westworld.

Joy’s success as a writer, producer and director doesn’t surprise Aaron Ryder, an Academy Award–winning film producer. Ryder will produce Joy’s feature-film directorial debut, Reminiscence, an action-thriller written by Joy and purchased by Warner Bros. “She’s a grinder, and she’s willing to do the hard work—a lesson I suspect she learned early in life that’s served her well,” says Ryder.

A ‘Deep Introvert’ in Hollywood

In a black jumpsuit and high-top Converse sneakers, hair piled atop her head, Joy radiates confidence and warmth. She remains modest about her growing role among the Hollywood glitterati.

Joy describes herself as a “deep introvert,” and popular media portrays her as something of an enigma. She avoids her own press, counting on Nolan to tell her about media mentions requiring her attention. Following reviews and critiques, she says, feels like staring at her reflection for too long.

“There is something quite odd about it,” she says. “Instead of reading articles about myself, I should probably be reading stories to my kids. Or writing.”

Joy readily cops to keeping her gym membership only because it gives her a quiet place to shower “without two kids screaming at me.” She rises about six every morning to get her son and daughter ready for the nanny before Joy and her husband depart for work. When the cameras aren’t running, Joy’s 12-hour workdays might include doing background research on technology, brainstorming in the writers’ room, reviewing set design ideas and reading scripts.

The path to where she is today may seem as nonlinear as a Westworld episode, but Joy says the knowledge and perspective she gained in her years in the corporate world and in law school are essential to the work she does now. “I write about topics that were fed by having diverse experiences in life and academics,” she says. “You won’t have anything to write if you don’t understand anything beyond writing. You won’t have anything to say.”

On set, the convergence of her diverse skills is even more apparent. “You’re dealing with hundreds of people who come together to make an hour of TV,” says Joy. “They’re all incredibly skilled artists and craftsmen and workers of all different sorts. As producer you have to understand the ways your shooting schedule works and what can be attainable. Can you shoot here? Can you use this technology to make things more efficient? How do you structure your time for a shoot? If you have a certain facility with that kind of mathematical and logic-based thinking, it allows you more freedom to push the creative further.”

The Show, The Show

What is to come in season three is a tightly held secret, but if past seasons are any guide, the show won’t shy away from the dark and difficult. In scenes Westworld creators were writing as the #MeToo movement was unfolding, the female host Dolores, played by Evan Rachel Wood, suffers sexual violence at the hands of male guests. “We were writing about this and #MeToo happened. People were finally, publicly [articulating] the private weight that we carry around as individuals: ‘My God, there is a darkness here that no one can say or name,’” Joy says. “When people start finally naming it, it leads to progress.”

Future episodes also seem likely to continue to raise thorny questions about the impact of technology on culture, personal identity and politics. Stanford’s David Eagleman, a neuroscientist and an adjunct professor in the department of psychiatry and behavioral sciences, is a Westworld consultant. Part of his role, he says, has been to discuss the deep philosophical and scientific questions that underpin the show, from whether free will exists to whether robots could become conscious. He has also contributed his pioneering technology, including a sensory vest that appeared in season two. It vibrates in response to sound and then translates those vibrations into electrical signals in the brain, allowing a deaf person to “hear” through the chest. 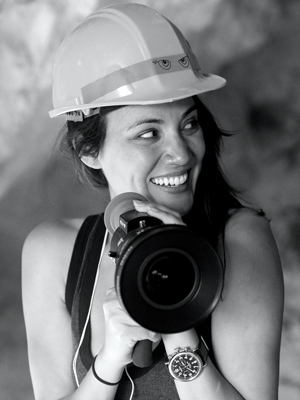 “I was in the writers’ room shortly after Lisa and Jonah had their baby,” Eagleman says. “Lisa wore my vibratory vest and she was able to feel the sound of her baby making noises through a video link on her cell phone. We all had a good laugh about the weird, futuristic nature of that.”

But for Joy, who calls it “glorious” when she can find a few quiet hours to write, the most motivating part of creating the show isn’t “all the intellectualism and the philosophy.” Or the cool tech. It’s the feelings evoked by the characters—both human and android.

“If there’s a character who makes you want to cheer a little bit, or who makes you feel enough for them that you shed a tear when they’re down and you can relate, even though they’re robots in a show, that’s what drives my most passionate writing sprees. Those moments,” she says.

“I’ve never known a writer or director who could tap into what makes an audience feel joy and laughter, as well as sorrow and pain, within the same breath” as well as Joy can, says Athena Wickham, executive producer of Westworld and president of Kilter Films. Perhaps that is the magic of Lisa Joy.

The new girl on New Girl.