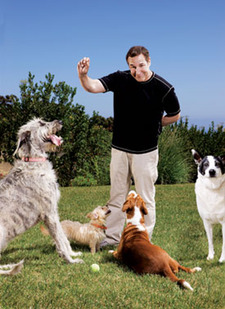 In the game of life, TV producer Sam Simon holds the high cards. Here are just some of the reasons:

His latest venture is a poker show on the Playboy Channel called Sam’s Game, created by filming the regular Texas hold ’em games he hosts for his friends.

His main endeavor is the Sam Simon Foundation, which rescues dogs from the pound and trains them to be companions to the deaf.

He was a boxing manager just long enough to guide Lamon Brewster to the world heavyweight championship, and then he retired from the Sweet Science.

He is a valued member of Howard Stern’s rambunctious radio family—as a writer, guest, commentator and, he jokes, butt of Stern’s jokes.

And because Simon, ’77, was instrumental, two decades ago, in the creation on television of another iconic family—Bart, Homer, Marge, Lisa and Maggie Simpson and the other denizens of Springfield—his legacy will include one of the great sociocultural phenomena of the age.

More than 20 years, 400 episodes and one hit movie later, The Simpsons has been the subject of learned treatises and scholarly discussions concerning its reflection of, and contribution to, American culture. “Time called it the best TV series of the 20th century,” Simon says. “There weren’t any TV series in the 19th century, so I assume that makes it the best of all time.”

Simon hasn’t been with the show for more than 15 years, but he is still credited as an executive producer, a tribute to how he helped lay its foundation by hiring many of the show’s longtime writers and developing its sensibility. “Sam brought a level of honesty to the characters,” says Ken Levine, who has written for The Simpsons as well as writing and producing for sitcoms including M*A*S*H, Cheers and Frasier. “Is it too bizarre to say he made cartoon characters three-dimensional? His comedy is all about character, not just a string of gags. In The Simpsons, the characters are motivated by their emotions and their foibles. ‘What are they thinking?’—that is Sam’s contribution. The stories come from the characters.”

Simon’s take on his contribution to The Simpsons is a bit simpler. “It was largely based on what I didn’t like about the Saturday-morning cartoon shows I worked on,” he says. “I wanted all the actors in a room together, not reading their lines separated from each other. The Simpsons would have been a great radio show. If you just listen to the sound track, it works.”

A 7.5-acre spread in the foothills of Malibu serves as the headquarters of the Sam Simon Foundation, a venue for charity functions and private parties, and home to some of the luckiest dogs on earth. Representing a variety of breeds, and all shapes and sizes, these dogs live amid meticulously maintained grounds that could as easily serve as a resort for pampered humans. Occasionally, the dogs are brought into a specially outfitted apartment where they are taught to recognize the sounds of a telephone, smoke detector, alarm clock, oven timer, a knock on the door and even a person’s name.

The success rate is a modest 20 percent. Barb Velasquez, the assistance dog program director, says it would be higher if they raised animals for this purpose, but the foundation’s commitment is to save dogs as well as serve people. “A lot of them are neglected and some have physical and psychological problems,” Velasquez says of the dogs, most of which come from nearby animal shelters. Those that can’t be trained are placed for adoption.

Lately, the foundation has begun training dogs to help Iraq and Afghanistan war veterans with post-traumatic stress disorder, a cause suggested to Simon by Sen. Al Franken. Of Franken’s fellow Democrat in the White House, Simon says, “I’m glad Barack Obama is the president. I like everything about him except the Portuguese water dog. He should have adopted a stray. I hope one day we can look back and say that’s the worst thing he did.”

Standing on the porch of a house overlooking a rolling landscape that features old-growth sycamores, Simon smokes a cigar and considers the road that led to the small yellow cartoon characters who are responsible for it all. Raised in Beverly Hills and Malibu, Simon was enough of an artistic prodigy to be seen drawing on local television shows when he was 5 years old. But when he entered Stanford, he was denied admission to an introductory drawing class. “You’d be taking the space of a student who has talent,” the professor told him.

For a while, Simon, who became a psychology major, confined his drawing to sports cartoons for the Daily, the San Francisco Examiner and the Palo Alto Times. But after graduation he got a job animating Saturday-morning cartoon shows. “When I got into television, they said the reason they liked my stuff is I was self-taught and unschooled,” says Simon, recalling the professor. “So maybe he did me a favor. I don’t think the rest of those kids were geniuses, though.”

Lou Scheimer, a producer who noted the young animator’s talent for storytelling and dialogue, suggested Simon try his hand at writing. He sent a spec script to Taxi, which was promptly shot and, wonder of wonders, aired. “That almost never happens,” Simon says. “A year later, I was running the show.”

What followed was a straight-up trajectory during which he wrote for and produced Cheers, It’s Garry Shandling’s Show, Barney Miller, The George Carlin Show and more. It was as producer of The Tracey Ullman Show that Simon first saw 10-second spots featuring the Simpsons. The Fox network thought Matt Groening’s characters had potential. Simon’s background in animation suited him to develop the project.

The Simpsons, with its unusual blend of vulgarity and sophistication, was an immediate hit. “There would be a few minutes where you’d have a parody of a Kubrick movie and then you’d have Homer on the kitchen counter eating cake like a dog,” Simon says. “I thought some people would like some aspects of it, but I wasn’t sure how many would come along for the full ride. It turned out I was incredibly wrong. Homer is now the prototype for every male lead on a comedy show.”

As the Fox show began production, Simon got something that had just begun to exist: home-video rights. On such deals are fortunes built. When he left the show after four seasons because the daily grind of television had begun to take its toll, the money followed him home. A 2007 profile on 60 Minutes said that he receives at least $10 million a year for not producing The Simpsons. Simon says “tens of millions” is more accurate.

As he reflects on his good fortune working in television, Simon says, “In some ways, it’s the greatest job in the world. You make a product that’s given away, and all it does is make people smile. Nobody gets hurt, there’s no damage, and you can get crazy rich.”

RON RAPOPORT, ’62, is the author of a number of books, including, with Tim Reid and Tom Dreesen, Tim and Tom: An American Comedy in Black and White.

Finding alumni with tales to tell is part of the fun.