The new girl on New Girl.

ALL WRITE NOW: New Girl's Sanchez-Witzel kicks back on one of the show’s loft-apartment sets, sense of humor intact after a successful script redo. Manuello Paganelli 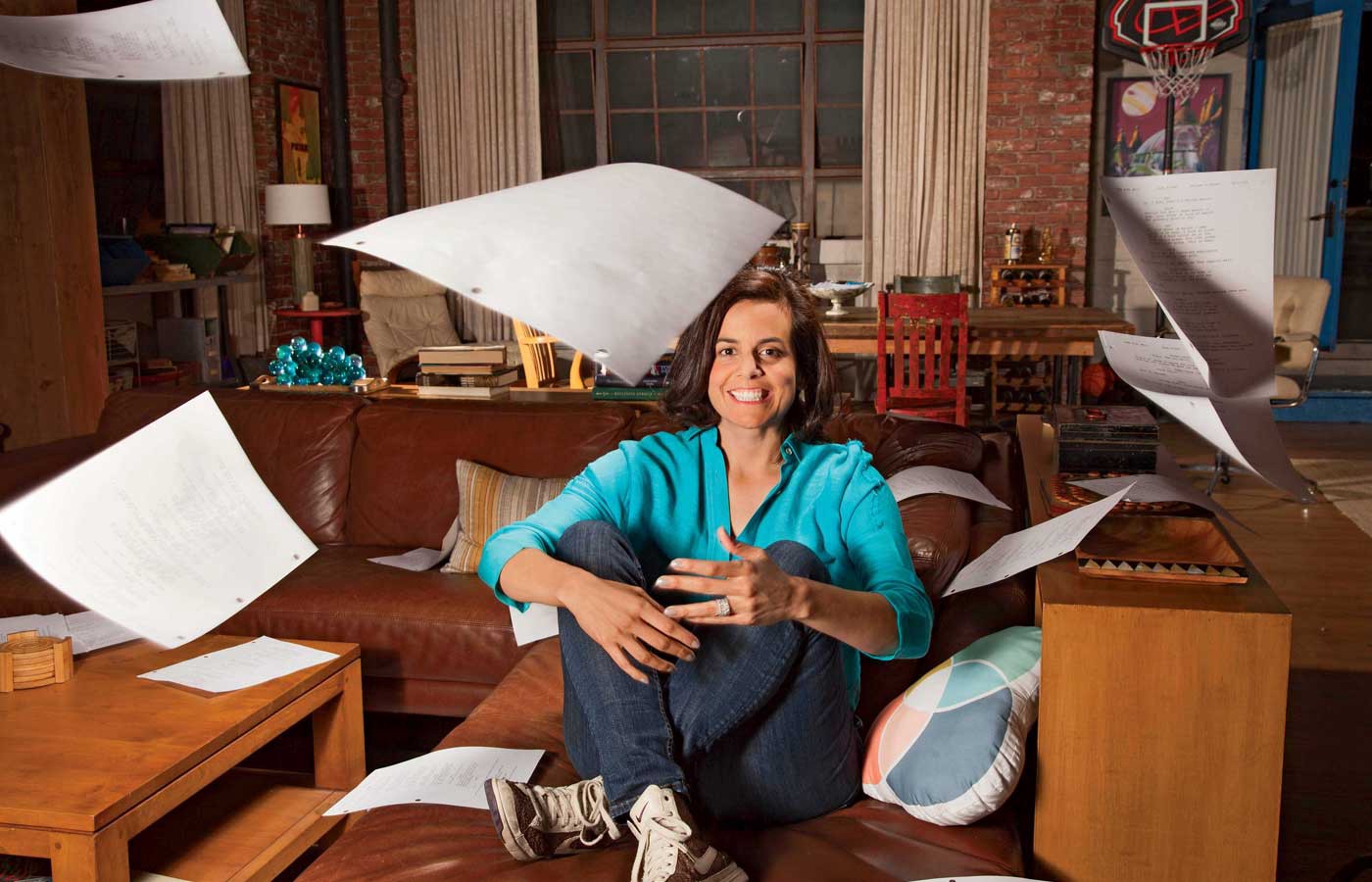 ALL WRITE NOW: New Girl's Sanchez-Witzel kicks back on one of the show’s loft-apartment sets, sense of humor intact after a successful script redo. Manuello Paganelli

On a Monday, exactly a week before shooting was scheduled to begin on Danielle Sanchez-Witzel's first script for the Fox Network comedy New Girl, the actors pulled chairs up around a table to read through their dialogue for an audience of network and studio executives and some of the show's writers. As sometimes happens when a polished script is first read aloud, a few jokes fell flat, a few storylines weren't working, and, consequently, production ground to a temporary halt.

"I've had table reads go great and make for bad shows, and table reads go bad and make for good shows," says Sanchez-Witzel, '96, a co-executive producer of the show and one of its top writers, who joined last June at the start of season 4. "It makes for a very stressful half-hour for the writer whose name is on the script, despite the fact that this job is collaborative. But you can't let your fears take over."

The veteran TV writer knew the answer could only be to focus obsessively—not on the ticking clock but on the solution. "What are the answers?" she asked herself repeatedly over the course of the two days it took her and the writing staff to work out the kinks.

And they nailed it, according to a review of the stunt-capped episode, in which baby-shower guests drop their passive-aggressive façades and brawl like men (sample joke from the very Russian mother-to-be, gazing at her new crib: "Where is top of baby cage?"). In her column for Glamour, entertainment writer Megan Angelo singled out Sanchez-Witzel for thanks, adding: "'Girl Fight' was a gift—and a reminder that when the show wants to do ladyfriend dynamics, it can still do them better than anyone else in the game."

At least some of Sanchez-Witzel's grace under pressure comes from growing up as the youngest of four sisters in a boisterous family of wiseacres. And it stood her in good stead at Stanford, where she did live play-by-play reporting for KZSU when the baseball team went to the College World Series in 1995.

A giant sports fan, Sanchez-Witzel seemed destined for a career behind the mic as her graduation neared. But the prospect of paying years of dues broadcasting from small towns held no appeal.

But then her adviser, the late Professor Henry Breitrose, proposed an alternative: How about doing a master's degree in fine art through the UCLA Producers' Program? She took his advice, stumbling onto the path to her dream job while in a sitcom-writing class she'd taken on a whim.

Looking back, that choice seems both serendipitous and natural. Television often played a starring role in the Sanchez family's evenings; they bonded over their favorite shows, and the kind of humor they saw reflected their own family dynamics.

"It's four Brady Bunches," Sanchez-Witzel's mom would say, when telling her kids how long a drive would be.

"We were a very loud, funny family," Sanchez-Witzel says. "In my house, the best joke won the night. If you could make my mom and dad laugh, it was, like, 'I did it!'"

According to Sanchez family lore, one evening when Sanchez-Witzel was 5 years old, she slammed her small hand on the table and hollered, "It is my turn to talk!"

"When she did speak," recalls her sister Carey Sanchez Para, '86, the first of three Sanchez daughters to attend Stanford, "she was always making her point."

And when necessary, she says, "no one will outshout me." That's a great ability to have in a writers' room, where colleagues support one another while still fighting for their own vision to prevail.

She also practiced the art of the quick rejoinder while she was growing up, says her sister Nicole Sanchez, '94.

"Listen to me, Danielle," Nicole remembers their mother saying once, urging her daughter to keep things in perspective. "There will always be a cuter person, a smarter person, a funnier person around that corner."

"Yes, Mom," Nicole recalls her teenage sister responding. "But just where is that corner, exactly? I have yet to come upon it."

After graduating from UCLA, Sanchez-Witzel was hired through an NBC Diversity Initiative as a staff writer for the sitcom In-Laws. The initiative aimed to provide an array of voices for the network's shows.

In a profession rife with nepotism, Sanchez-Witzel says, her gender and Mexican heritage opened doors, but nothing more.

"I was a woman. I was a Latina. I was a 'double whammy,' as they say," she says. "But that all goes away once you are a staff writer" and you're facing the survival of the fittest, where talent is constantly rotated on and off shows.

One of Sanchez-Witzel's early supporters was fellow Stanford alum Mike Tollin, '77, a director and producer known in Hollywood for his sports-focused TV shows and movies. Tollin also had done play-by-play sports calls for KZSU, but nearly 20 years earlier. ("To have worked for KZSU was very specific," Sanchez-Witzel says, "and who did play-by-play?")

She worked briefly as Tollin's assistant and then quit her job to write scripts at home for a year. When Tollin read Sanchez-Witzel's scripts, he says, he recognized in her not only a kindred spirit but also a strong voice on the page.

"She's got an infectious personality," Tollin says. "She is innately skeptical, bordering on cynical, and somehow, through it all, manages to stay upbeat, positive and full of good cheer. She has this way of looking at things askance. If she senses an inauthentic comment or moment—you can't get away with anything with her. She's kind of my favorite person, because with her it's all real."

So, Tollin sent one of her scripts to his agent. His agency took her on and still represents her.

Sanchez-Witzel has written for 10 shows thus far, including George Lopez, Whitney and four seasons of My Name Is Earl. Up until last year, she also worked on development deals, or writing original show concepts for studios. But not a single one has been made into a pilot yet.

"My husband could certainly tell you about my throwing myself all over the living room, saying, 'I can't do it anymore!'" after learning that yet another one of her shows failed to sell, she says. "Even in those sad times, I've never had the thought that I want to quit the business."

Recently, instead of working on concepts for studios, she has begun developing shows on her own time, after finishing the intense daily grind of writing for New Girl. It's her way of ensuring her concept stays solidly her own.

"I think it's a little bit hard to maintain your voice—though not impossible—and go through the studio and network system," she says.

Now in its fourth season, New Girl is a millennial version of Friends, but on speed. While the six main characters may be ridiculously dim, the show's repartée and nonstop gags are wound as tight as Swiss watchworks. It's a vehicle for its star, comedian Zooey Deschanel, with guest appearances from the likes of Rob Reiner and Jamie Lee Curtis.

On the last day of shooting her episode, titled "Girl Fight," Sanchez-Witzel, 40, showed up looking much like a college student, with a mop of dark curls and a heavy black backpack. Tucked inside were printouts of hundreds of unique jokes that the writers had generated for the episode. She kept them at her fingertips in case one was needed.

The crew was shooting a flashback to the childhood of one of the show's main characters, Coach, played by Damon Wayans Jr. As four child actors ran the scene, Sanchez-Witzel watched them on a monitor.

One little girl tells her brother that their two sisters braided their hair and wore bows without telling her—in other words, making her feel left out. ("Oh yeah, we would have done that," Nicole Sanchez later says, laughing, when hearing about the scene.)

So the young Coach clips a bow into his aggrieved sister's curls, confident that he has resolved the dispute and restored peace to the family.

In response, the older sisters take scissors and cut off the bottom of their own braids, bows and all, leaving their brother with his mouth agog. The lesson for men: Don't try to settle girl fights—much less understand them.

After the kids run their lines, the director sprints over to Sanchez-Witzel for feedback.

She quietly acts out a hyperventilated, little-girl meltdown, gasping with sobs between each word, to show how the young actress should deliver the next take: "They wore braids and didn't tell me on purpose!"

The director nods and hurries back to the set.

"You're kind of the director here," a reporter observes.

"Television is a writer's medium, and film is a director's medium," Sanchez-Witzel explains. "If this were a film, as the writer, I probably wouldn't even receive an invitation to the set!"

It's a trip to walk through the New Girl characters' apartment on the 20th Century Fox lot in Century City. Sanchez-Witzel makes her way over to the bedroom of the character Winston, played by Lamorne Morris.

Dozens of cutout paper snowflakes hang by strings from the ceiling and lay strewn over the floor of Winston's room. Winston has been making the snowflakes instead of studying for his police academy exam.

Standing amid her three-dimensional idea sprung to life produces a small, shimmering moment of satisfaction—as well as a reminder of what greater satisfactions could come.

"I wrote, 'Interior: Winston's Room. He's procrastinating. Pull back to reveal his room is covered with snowflakes,'" Sanchez-Witzel says, smiling and turning under the dangling fake snowfall. "Being able to tell stories for a living is such a blessing."

That's her goal, even knowing that creating her own show would mean she'd be working longer hours than she's ever worked before, day and night, seven days a week, and—if the show becomes a hit—for years on end. It would mean a virtually endless cycle of writing, perplexing table reads and still more rewriting.

"I definitely want the opportunity," she says, joking but not joking at all, "to be desperately miserable and overworked."