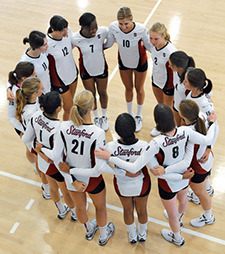 No overconfidence is detectable. Not a single victory is taken for granted. "We know that nothing's handed to us," declares Cassidy Lichtman, one of the co-captains of the women's volleyball team.

But as the squad powered through the early season, moving to the top of the national rankings, the best kind of confidence—built around composure and determination—was in steady evidence.

Although coach John Dunning was expecting good things, "no matter what stress" popped up from match to match, he was eager to see if everything that could go right would go right. And it did. "I've really been excited," he says, "by how they've stayed together, how they've helped each other, how people have stepped up in different matches. You're not sure about that until it actually happens."

By the time Stanford entered Pac-10 play, it was 9-0 and had vanquished arch-obstacle Penn State, which had won 109 straight matches, including NCAA championship finals against the Cardinal in 2007 and '08. Stanford went into the September showdown with clear objectives—even perhaps as the emissary of many teams that disliked the specter of, what, a possible 150-match winning streak? Better for the sport to have Stanford restore some balance. Delightful for Stanford to oblige, as it did in straight sets (28-26, 25-12, 25-18).

"When I look at this team, the longer we go along, I'm being surprised. Because I think we have even more pieces than we thought. It's a neat journey to see everyone contribute," notes Dunning.

The team's depth and spirit manifest everywhere from the stat sheets to practice competition, which has been enlivened by an outstanding freshman class. But make no mistake, the star quotient is considerable, with senior outside hitter Alix Klineman at the top of the list. She was national player of the week after leading all players with 16 kills and 10 digs in the triumph over Penn State.

Lichtman, a senior setter/outside hitter who was a first-team All-American last season, and libero Gabi Ailes, a senior who earned All-America honorable mention last year, complete a nucleus that's about leadership as well as performance. All three, says Dunning, "may be the best players in the country at their positions."

Lichtman on the Cardinal men champions: 'We talk about it all the time, how we want to get that win that they got first.'

All have felt the acute sting of the national title losses to Penn State. All are trying to cope with the disquieting feeling of their Stanford time draining away, while also thriving on the sense of urgency from a last-chance championship quest. The Pac-10 season ends in late November; the NCAA tourney starts in early December.

"We're going to win a national championship," says Lichtman. To hear her say it is to understand the difference between swagger and resolve. She's purely about the latter. And she and her teammates have incentive and inspiration beyond the near-misses of the past: the success of last season's men's team, which captured the NCAA crown. The opponent, blasted away in straight sets at Maples Pavilion, was . . . Penn State.

"Our whole team was there, front row, watching," explains Lichtman. "I think after the game we all just had chills almost, just motivated to play. We wanted to play right there. We were ready to get the Penn State women's team out and play for a championship."

The men had come through a much different crucible than the women. Five of the players had been on a 3-25 team as freshmen. They scratched and clawed forward to 17-11 the following year, then 21-11 the next, but with an early playoffs loss. Then, last spring, magic.

"We talk about it all the time, how we want to have an attitude like theirs, so motivated, so supportive of each other," Lichtman says. "And try to get that win that they got first."

Blocking Out the Pain

Blocking Out the Pain

The Art of the Fling