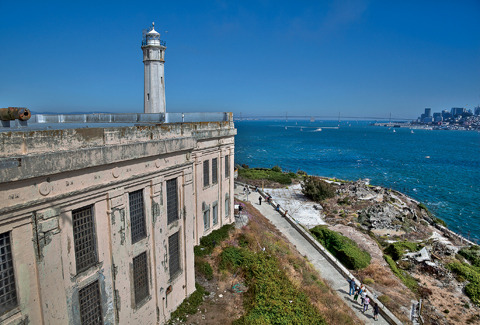 Ava Roy gazes longingly at the weedy old military parade ground on Alcatraz Island. The artistic director of We Players can't wait to dispatch her merry band of actors to that spot for rehearsal. But the island where a maximum-security prison once held Al "Scarface" Capone and Robert "Birdman of Alcatraz" Stroud is now a bird sanctuary, and the cormorants are nesting.

"We're waiting for the chicks to fledge and grow up and go off to college," says the blue-eyed, intensely optimistic Roy, '03, who started We Players at Stanford. Devoted to interactive theater created for specific locales, not traditional stages, the troupe has sprinkled Shakespeare around San Francisco Bay, including productions of Macbeth at Fort Point and The Tempest at the Albany Bulb. In partnership with the National Park Service, they are staging a run of 25 performances of Hamlet on Alcatraz, weekends through November 21.

Roy, 29, loves to play outside, and she's very good at getting others to play with her. Waiting for cormorants to learn to fly is a relatively easy part of directing a theater production, outdoors and inside, in varying weather conditions, on a ferry-accessed island amid day-tripping tourists (some 4,000 each day). But Roy thrives in such a scenario. The 17-member cast includes Jack Halton (as Polonius), who says, "So very rarely are directors aware of the cast's morale. Ava gets everyone relaxed, but she has a firm enough grip to keep it moving forward."

Roy's three-year collaboration with the National Park Service began when Alcatraz site supervisor Amy Brees saw the We Players' Macbeth at Fort Point. The audience followed actors and musicians around as they performed at the Civil War-era site near the Golden Gate Bridge. "It was the most amazing piece of theater I'd ever seen," says Brees, who approached Roy immediately after the play. She pitched the idea of doing something on The Rock "that could help us tell the Alcatraz story. Since then it's been a true collaboration." In fall 2009 We Players' first performance on Alcatraz explored the conflict between individual identity and duty to family in Ellen McLaughlin's Iphigenia and Other Daughters.

Park Service buildings are no longer static history lessons. "We want to provoke people into thinking about why these places are important to our heritage," Brees says. "What does it mean to our life today?" Hamlet and Alcatraz share themes of isolation, justice and redemption. To Brees, Hamlet is about being imprisoned in your own mind. A lament like Hamlet's "O God, I could be bounded in a nut shell and count myself a king of infinite space, were it not that I have bad dreams" takes on new meaning when juxtaposed with Alcatraz's barren cells and distant horizons.

No birds are harmed and no taxpayer money is spent in the making of Hamlet on Alcatraz. We Players has raised half of a hoped-for $58,000 budget through kickstarter.com, personal loans and dinner theater. Only the stage manager is being paid during this production, although Roy hopes the other participants can get a stipend at the end. Volunteers include a lighting designer, a composer and a stuntman from the Pirates of the Caribbean movies who is choreographing fight scenes. Reservations are free, but We Players wants to receive donations, suggesting $60 per person would be a fair thought.

Reservations and close-toed shoes will be required of the 100-per-show audience members, who will gather at Pier 33 to board the ferry to Alcatraz. The play commences during the 10-minute boat ride. Approaching the island, Hamlet-goers, distinguished from other visitors by red sashes, notice action on the parade ground. There, the death march for Hamlet's father transforms ominously into the wedding march for his mother and the new king of Denmark. Debarking the ferry, the audience follows musicians (perhaps a half dozen at each performance, mostly horns and wind instruments) and actors to various stopovers on the island, including some sites not normally open to visitors.

There will be sword fights, something of a natural for an old military base. "It's like being in direct conversation with the space," Roy says. "Sometimes I feel like I'm cheating. I don't have to invent a set."

Roy comes from Lenox, Mass., home of the year-round Shakespeare & Company. She first played Juliet at 13 in a school production that was part of the company's fall festival. "By the time I got to Stanford, I'd already spent a lot of time with Shakespeare," says Roy, who arrived on campus sight unseen. Like a kid who'd been cooped up in a snowstorm, she recalls thinking, "This campus could be my playground."

And so it was. In spring 2000, she assembled a group to perform Romeo and Juliet. Sixty people saw its opening moments, but the audience doubled as the players moved around campus from the Montague-Capulet fight at Tresidder to marriage vows exchanged in front of Memorial Church to Juliet's entombment at the Burghers of Calais statues. We Players went on to stage Twelfth Night on the Law School steps and at Hoover Tower and Hamlet at the Cantor Arts Center, with the king and queen using two large seated statues as their thrones. (And for a non-Bard outing of Jabberwocky, players and audience gathered at the intersection of University Avenue and Campus Drive, and the Mausoleum became the Rabbit Hole.)

Linda Hess, a senior lecturer in religious studies, saw that Hamlet at the Cantor. "I was knocked out by the power and amazing artistic originality of what she did." Hess specializes in Hinduism and the religious poetry of North India, which is sung and performed, and in the Ramlila, a late 16th-century epic about the life of the god Ram that is performed annually, for 30 days, at widespread outdoor locations. She worked with Roy on her individually designed major: ritual and performance in aesthetic education.

Hess also ran interference for Roy on occasion. Once there was a noise complaint to police during an Encina Commons rehearsal. And Roy remembers standing, in motley fool regalia, in the law dean's office, explaining that the opening Twelfth Night shipwreck scene would move along after only five minutes. Such events taught her "the importance of taking time to articulate my intentions in advance, to include those people who regularly inhabit a space."

An Alcatraz rehearsal in August starts with the 10 principal actors making a circle for warm-up exercises. A boatload of 400 tourists soon arrives, and some head to the dockside amphitheater to wait for the tram, rather than climb the equivalent of 13 stories from here to the cellblock. "Draw the circle closer to make space for the tram," Roy says once, and then more emphatically, "Draw the circle closer to make way for the tram!" No actors or audience members will get run over on her watch.

The play begins with the sentinels, Francisco and Bernardo, dispatched to the third-floor balcony of the 1860s brick barracks. We look up to Bernardo, who bellows, "What, is Horatio there?" Below, amid the audience, sad Horatio answers, "A piece of him." The moment works as Roy wanted, blurring the space between actors and audience. "We don't have one witness, one doer," she says later. "We invite people inside the world of the play."

Back at the barracks, Roy cues the actors: "Let's go from 'O that this too too solid flesh would melt.' " Hamlet (played by Andrus Nichols) launches into soliloquy. The setting: crumbling edifice, overgrown ivy and rusted barbed wire. The lines: " 'tis an unweeded garden / That grows to seed; things rank and gross in nature."

The ghost—Hamlet's father—gets a workout on Alcatraz, appearing in five locations, but even scarier than he is a scene set in the prison hospital, with its creaky metal beds, caned wheelchair and ominous medical instruments. You can't escape the theme of melancholy in the words, the lone lightbulb, the stains on the ceiling and rotten wood under the moldy plaster—all contrasting sharply with the shimmering vision of San Francisco 1.4 miles away.

After Hamlet, We Players' residency on Alcatraz will continue in interactive installations, collaborations with other artists, and work in schools and prisons, through fall 2011. Roy has notions, too, for future dramatic matchups. "I have a long list of shows I'm interested in, and spaces I'm interested in," she says. "Theater is an ephemeral moment. The point is: What lives on in people's hearts and minds?"