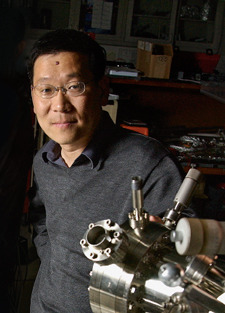 You've heard the story before: Scientists start down one research path and encounter a more exciting one that leads them to an unexpected discovery. So it was for a Stanford team that appears to have found a way to dramatically improve the efficiency of solar-cell technology.

"It was a surprise to us," says Professor Zhi-Xun Shen, director of the Stanford Institute for Materials and Energy Science. "Everything in hindsight is not a surprise—we figured out the why. But at the time, it was a surprise."

Shen and Nick Melosh, assistant professor of materials science and engineering, were working on a project looking for superconducting properties in materials. But their observations led them to develop a new energy conversion process called photon enhanced thermionic emission (PETE), which overcomes solar-cell limitations that occur at high temperatures. Photovoltaic technology—producing voltage from radiant energy—becomes less efficient as heat increases. But the PETE approach, says Shen, could boost conversion efficiency by 30 percent, potentially supplying power production that would be economically competitive with oil.

Shen and Melosh's research was published at the start of August. By the end of the month, they learned of a $1.8 million award from the Gordon and Betty Moore Foundation for further development of PETE, which also has backing from the University's Global Climate and Energy Project. Other support has come from the U.S. Department of Energy and the Defense Advanced Research Projects Agency.

More than once, Shen and Melosh have emphasized how their project shows off the value of government support for basic science. After the announcement of the foundation award, they noted in an email that PETE originated "from an unexpected observation of electron emission in fundamental research at Stanford and SLAC," the National Accelerator Laboratory operated for the Department of Energy.

Among the next steps is advancing the PETE technique to the point of analyzing cost-per-watt compared to other technology. Shen says an ambitious goal has been established: having a practical device ready for testing in about three years.

The photovoltaic cells in typical solar panels lose usefulness as temperatures exceed 100 degrees Celsius (212 Fahrenheit). And they react to only a portion of the light spectrum, meaning they are unable to convert valuable amounts of heat into energy. "The nature of the semiconductor is that you always lose some energy to heat, and the performance deteriorates rapidly if the device heats up," says Shen.

The PETE process points the way to marrying photovoltaic systems with thermal conversion technology. By coating semiconducting material with a thin layer of cesium, a metallic element, the material could generate electricity from both light and heat, with a PETE device reaching top efficiency at more than 200 Celsius.

"What we've demonstrated is a new physical process that is not based on standard photovoltaic mechanisms, but can give you a photovoltaic-like response at very high temperatures," Melosh told the Stanford News Service, stressing how "fundamentally different" the approach is to previous methods of harvesting energy. "In fact, it works better at higher temperatures. The higher the better."

Perhaps just as significant, the costs of deploying the technology should be relatively cheap. Melosh told the News Service that PETE devices will work best in solar concentrators, such as parabolic dishes that can hit 800 Celsius. Shen and Melosh's team is thinking about designs that would allow the devices to be added to existing systems inexpensively.

There are ample remaining challenges, notes Shen, including "how to find the optimum materials to realize the full potential" of the conversion process and the device designs. But "we have validated the concept," he says, "and this is a very promising technology."