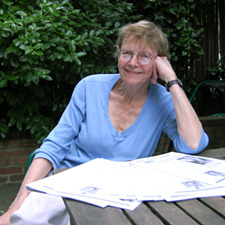 In 1987, Joan McAllister was a New York City volunteer who thought it might be helpful for homeless parents to have a list of programs available to their children. She made some calls, typed up a brief newsletter and hand-distributed 1,000 copies to shelters around the city. Nearly 250 issues later, that volunteer project has become a vital resource for homeless families and the agencies that serve them.

McAllister is still the publisher, editor and writer of "How . . . When . . . Where," a free monthly newsletter that informs homeless New Yorkers.

"Everybody knows her, everyone relies on her," said Colleen Jackson, executive director of West End Intergenerational Residence, which serves homeless families on the Upper West Side.

Armed with a cordless phone, an iMac, an ancient printer/fax and an exhaustive knowledge of social programs, McAllister is a tireless advocate for struggling families who need clear and accurate information about housing, food stamps and more.

"How . . . When . . . Where" (a working title initially, but she "never got around to thinking of another one") blends McAllister's passions for journalism and service.

Joan Seaver practically "lived" at the Stanford Daily offices after transferring to the Farm her junior year from Swarthmore. After college, she worked for United Press in Los Angeles and for Newsweek and NBC News in New York City. She stopped out of the workforce after her marriage to a Newsweek editor, John McAllister, and the births of their two children.

Her husband died in 1974, and her children left for college a few years later. McAllister threw herself into volunteering. After working on several programs for the homeless, she realized that learning what resources were available to them often took more time than struggling families had. The newsletter was born.

McAllister runs the operation from the brick West Village townhouse where she's lived for 40 years. Printed in English and Spanish, the monthly eight-page newsletters offer updates on social programs alongside success stories from homeless or formerly homeless individuals. McAllister's lists of housing brokers who accept subsidies, food pantries and other resources are so thorough that welfare offices and shelters often hand out photocopies of them to clients.

It costs about $50,000 per year to publish and distribute the newsletter, funded by grants from private individuals and a fall fundraiser. Roughly 15,500 copies are distributed each month to shelters, agencies and residences catering to the homeless.

Today, at 81, McAllister plans to keep running the newsletter as long as families still need it. "I don't see how people can function without the information, and its not coming from anyone else," McAllister said.

CORINNE PURTILL, '02, is a writer in New York City.

Remembering when losing wasn't everything—even though it was the only thing.