A Stanford-centric look at 50 years of innovation. 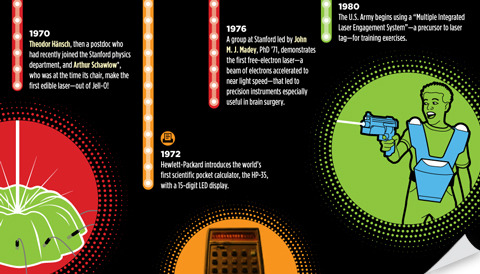 In 1960, a young Stanford graduate named Theodore Maiman designed and built the world's first working laser. The realization of a concept introduced four years earlier by Arthur Schawlow and Charles Townes of Bell Labs, it used pulses from a photographer's flash lamp to excite atoms in a fingertip-sized ruby crystal, producing a deep red beam. Some might even call it Cardinal. University faculty, students and alumni have made significant contributions to the field ever since, advancing the fundamental science (and earning three Nobel Prizes—booyah!), as well as developing applications in industries as diverse as medicine, electronics, telecommunications, entertainment and the military. Hail, Stanford, hail.

1961: Peter A. Franken*, who taught at Stanford in the '50s, discovers nonlinear optics when he focuses a ruby laser onto a quartz crystal and generates ultraviolet light.

1962: Doctors at Columbia-Presbyterian Medical Center use a ruby laser to destroy a retinal tumor—the first medical use of a laser.

1964: Richard G. Smith*, '58, MS '59, PhD '63, is part of the Bell Labs team that creates the first working Nd: YAG laser, whose uses include cosmetic surgery and treatment of skin cancer.

Richard H. Johnson*, MS '53, was instrumental in developing the aeronautical solutions for the first laser guided bomb, the BOLT 117.

1969: Donald J. Spencer*, '56, leads the team that develops the continuous-wave chemical laser at the Aerospace Corporation in El Segundo, Calif.

First public laser show, created by Lowell Cross and Carson D. Jeffries*, PhD '51, performed at Mills College in Oakland, Calif; they are commissioned to design a laser and sound show for the Expo '70 World's Fair in Japan.

1970: Theodor Hänsch, then a post-doc who had recently joined the Stanford physics department, and Arthur Schawlow*, who was at the time its chair, make the first edible laser—out of Jell-O!

1981: Arthur Schawlow* shares the Nobel Prize in Physics for his contributions to the development of laser spectroscopy.

1997: Stanford professor Steven Chu shares the Nobel Prize in Physics for his role in developing methods to cool and trap atoms with laser light, a method dubbed "optical molasses."

1998: The first laser is approved for LASIK surgery by the FDA.

2005: Theodor Hänsch shares the Nobel Prize in Physics for the development of laser-based precision spectroscopy, including the optical frequency comb technique.

2008: Blu-ray beats out competing blue laser based technology HD DVD as the format of choice for high definition media.

2010: The National Ignition Facility in Livermore, Calif., delivers a historic level of laser energy—more than 1 megajoule (approximately 500 times the energy consumed by the U.S. at any given time).