A roadside billboard shows a smiling man in a hardhat and headlamp. The caption reads: "Coal keeps the lights on!" The images that follow show heavy equipment moving mounds of earth, and the scarred and barren landscape left behind.

Thus begins the trailer for Deep Down, a documentary about how the economic and environmental issues surrounding surface mining have divided one eastern Kentucky town. Co-director and editor Sally Rubin, MA '04, left, spent 2 1/2 years living on and off in the Appalachian community of Maytown while working on the film. In this and other regions of the United States where coal deposits are concentrated, mining drives the economy and has long been a way of life. Yet, the extraction and processing of this fossil fuel has devastating environmental, ecological and public health consequences.

For Rubin, these issues are close to home: her mother is from a small town, high in the Smoky Mountains of east Tennessee. "Deep Down came into being out of a wish to put a new face on Appalachia," she says. "[The film] offers a portrait of these people as intelligent, ambitious, strong, and filled with deep integrity and values."

Deep Down airs nationally as part of PBS's Independent Lens series on November 23. 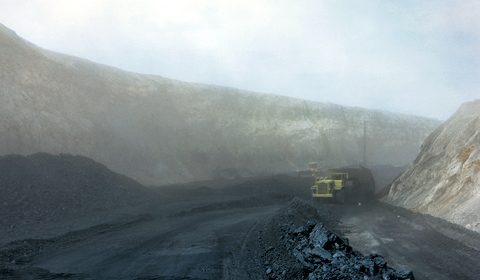 David T. Hanson
A LANDSCAPE LAID WASTE: After a blast in the pit, July 1982.

Colstrip is located in southeastern Montana, where the High Plains meet the Rocky Mountains. Its Rosebud coal mine, active since the 1970s, remains one of the largest strip mining operations in North America; its coal-fired power plant, the second-biggest west of the Mississippi, is one of the nation's worst polluters.

Photographer David T. Hanson, '70, grew up not far from Colstrip and his connection to the land of the shining mountains runs as deep as its veins of coal. Before leaving for Stanford, where he was an English major, Hanson spent a summer working the graveyard shift at an oil refinery in Billings, cleaning the smokestacks. In the mid 1980s he returned to make a study of Colstrip's ruined vistas—part of a larger examination of the contemporary American landscape. "Colstrip offered me an opportunity to examine how we live now and the consequences of our way of life," Hanson says.

Individual images from the series have been exhibited widely; New York Times art critic Vicki Goldberg noted that an aerial view of a waste pond resembled "a second-generation abstract expressionist canvas painted in acid." Hanson has collected the entire sequence of 82 photographs in a book, Colstrip, Montana, published November 30 by Taverner Press.