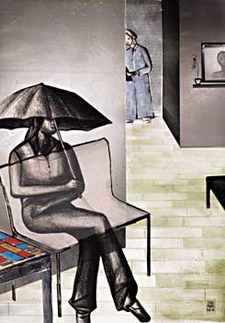 Every day, new studies come out warning of health risks or suggesting ways to prevent medical problems. How do you decide which research should affect your lifestyle choices? This question is at the heart of a new book, To Your Health: How to Understand What Research Tells Us About Risk (Oxford University Press, 2005). Two of the three authors are Helena Chmura Kraemer, professor of biostatistics in psychiatry at Stanford, and her daughter, Karen Kraemer Lowe, ’92, MS ’93. Marina Krakovsky, ’92, interviewed them.

Stanford: There’s a lot of research to keep up with, and some studies seem to contradict others. What do you say to people who say, “I’ll just use my common sense to figure out how to live my life”?
Lowe: Common sense is failing us in lots of ways. When the study came out showing that kids who watched more TV at ages 1 and 3 are more likely to have attention problems at age 7, friends asked me how much TV their kids should be watching. I explained that you don’t know the cause and effect, that there are so many reasons why children with attention problems might watch more TV—they might need it to calm down, for example. But one friend still thought it was causal. And that’s our natural tendency.

Which studies should you pay attention to?
Kraemer: Randomized clinical trials are at the top of the list, [studies] in which researchers randomly assign participants to a control or a treatment group, then follow the participants over a period of time to see if one group does better than the other, and, if so, how much better. It’s the one kind of study where you can dare to say the word “cause” and feel comfortable about it. And below that, where you should pay attention but not start to change your lifestyle, are longitudinal follow-up studies—in which researchers follow participants over a period of time to see, for example, which participants get the disease or disorder of interest.

I wouldn’t pay much attention to case-control studies and cross-sectional studies. In a case-control study, researchers select one group of people who have a particular disease or disorder and one group that does not, then compare the two in hopes of finding differences that might explain why one group has the disease and the other doesn’t. A cross-sectional study is one in which researchers interview participants at one point in time to see who has the disease or disorder and what else might be different about them.

Both types are important because they’re the basis of other research, but you shouldn’t base your lifestyle decisions on them. Major mistakes have been made in the past where people paid too much attention to these kinds of studies.

Such as?
Kraemer: There was a case-control study at Harvard, and its original intent was to see the connection between pancreatic cancer and smoking. They didn’t find it, so they messed around in the data and found there’s a strong self-reported relationship between drinking coffee and pancreatic cancer. So they said if you could knock out coffee drinking, you’d cut pancreatic cancer by half. I don’t think there was an epidemiologist in the country who didn’t react to that. It was a leap to the causal inference. From these kinds of studies, you can’t even tell which came first, so you can’t determine the cause.
Lowe: Another example is the commercials that say, “Go to preschool or you end up in jail,” on the basis of a cross-section of 4-year-olds who went to preschool and those who didn’t. But kids who didn’t go to preschool came from lower socioeconomic-level families. If you went to Foster City and looked at my daughter and said, “If you don’t put her in preschool she’s going to go to jail,” I’m going to say, “I don’t think so.”

You’d think researchers would know better than to report results in such a misleading way.
Lowe: Some are more careful than others. But even when researchers very carefully report their results, the media sometimes misrepresent what they say. For example, the researchers in the Women’s Health Initiative Group (WHI) carefully indicated that the number of deaths from problems such as heart disease, breast cancer, strokes and so on among the women who received hormone replacement therapy in their study was greater, but not enormously greater, than the number of deaths among the women who did not take HRT. Yet when the whi reported their results in 2002, many women rushed to get off HRT. In most cases, HRT did little or no harm, and, in some cases, might have been beneficial. Who should and should not take HRT, under what conditions, and for how long—all that is still not known.

I think many people understand the difference between a cause and a mere correlate, but you break it down even further.
Kraemer: Yes, it helps to know whether a correlate came before the outcome, and also whether there’s anything you can do about it. I wouldn’t take a genetic test for Alzheimer’s disease, because what’s the use of knowing if there’s nothing you can do? As soon as they find effective treatment of Alzheimer’s, I think a lot more people would want to get tested.

In general, how do you know whether you should have a particular test done?
Kraemer: Ask your doctor what’s going to happen if you have a positive test. Ask about the costs and the risks. But you should also ask what if the test comes out positive and you don’t have the disease. This is the part doctors don’t like to think about, about false positives.
Lowe: Doctors tend toward testing and treating, and we tend toward, “Well, the doctor’s doing something.” But that’s not always a good thing.

The Vioxx scandal made people think more about how drugs are tested and marketed in this country. What are your thoughts?
Kraemer: I have friends who swear by Vioxx and Celebrex. The problem with these drugs is the lack of moderator analysis [identifying risk factors that work differently in different groups of people]. The drug companies have been notably reluctant to do moderator analysis because they view it as limiting their market.
Lowe: If your kid’s given a prescription, find out if the drug has been tested on kids. The package insert tells you, [or] ask the company marketing the drug. Make sure you’re part of the population.
Kraemer: Another problem is the FDA doesn’t care about effect sizes, which is an indication of how clinically significant a result is—only statistical significance, which is not enough. Generally, statistical significance just means something non- random is going on; it doesn’t mean something important is going on. It’s unfortunate the word “significant” is in there. And it’s a shame that the FDA allows all drugs to be compared against a placebo, because it means you get a lot of me-too drugs. Researchers withhold known treatments from the control group to test whether the new drug is better than a placebo: that poses an ethical problem.

What other recommendations would you give researchers?
Kraemer: Above all, clarity of language. Sloppy language makes for sloppy science. “Risk factor” is used to mean whatever anybody wants it to mean, from “this might mean this might have something to do with the outcome” to the other extreme, that it’s a causal. For us, it has to precede the outcome and has to correlate with it.

One counterintuitive idea in your book is that learning of additional risk factors can muddle our understanding because some risk factors are just proxies for others.
Lowe: We often don’t know whether they’re proxies because researchers don’t tell us—probably because there’s little awareness of the importance of identifying proxies and setting them aside. I couldn’t get the best rate on life insurance because my total cholesterol is just over 200—but that’s because my HDL [good cholesterol] was high, whereas my LDL was low. But insurance companies look at total cholesterol, which reflects both the good and the bad. When I asked my doctor whether total cholesterol matters when my LDL/HDL is so good, he said no. Other things I’ve read seem to indicate the same thing, but I am still not sure.

With BiDil, the newly approved heart drug for African-Americans, couldn’t race be just a proxy for risk factors that we don’t yet understand?
Lowe: Well, race is a moderator in the effect of this drug, and the idea that researchers are looking for moderators to best tailor treatments to individuals is certainly a step in the right direction, even if the moderator is rather controversial. But this controversy is based partly on the possibility that race is a proxy for some other, unknown risk factor.