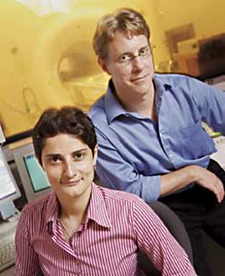 Lying on their backs in a functional magnetic resonance imaging (fMRI) tube, the Stanford doctoral students clutched button boxes as they plotted their financial portfolios. Every eight seconds they had to choose between two potentially risky stocks and a safer bond.

As the PhD candidates weighed the options, knowing they would take home cold, hard cash if they made profitable decisions, two researchers monitored their brain activity. When a peanut-size region known as the nucleus accumbens lit up, the researchers could predict that the participants were about to make a risky choice—probably a stock. When the anterior insula region of the brain was activated, the researchers knew their subjects had likely opted for the bond.

“Our study was a demonstration that you can use the brain to predict choices,” says Camelia Kuhnen, a doctoral candidate at the Graduate School of Business. Assistant professor of psychology Brian Knutson adds, “The idea is not just that emotion modulates decision making, but that emotion is essential to decisions—and that’s kind of radical.”

Knutson and Kuhnen published their findings in the September 1 issue of Neuron. They are part of an emerging interdisciplinary movement that goes by various names—neuroeconomics, neurofinance, behavioral economics and behavioral finance—and that is inhabited by economists, neuroscientists, psychologists and physicians who are trying to learn more about the human brain in order to better understand decision making and market economies, among other things.

Kuhnen designed the project that ultimately became this study while taking Knutson’s course Affective Neuroscience two years ago. The researchers found 19 doctoral candidates, fitted them with birdcage quadrature head coils and paid them $20 per hour, plus 1/10 of the earnings they would make with their investment choices, to lie very, very still in an fMRI tube at the Richard M. Lucas Center for Magnetic Resonance Spectroscopy and Imaging. By taking anatomical scans and mapping when the blood flowed into primitive regions at the base of the brain, Knutson and Kuhnen could tell when the participants were about to take a risk—perhaps a too-big one, such as investing in a stock that had a bad history. “These were pretty smart people, from the humanities, economics and finance,” Knutson says. “But even they did things that we would classify as being irrational.”

Kuhnen hopes this and future experiments will be useful in designing economic policy. “Regarding Social Security, how much freedom should we give individual investors to take care of their own retirement, when it looks like Stanford PhDs don’t make the optimal choices all the time?”

The Play's the Thing