My on-campus pad was the envy of my friends—until the weather changed. 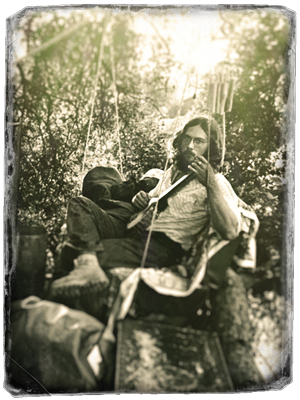 It’s fall 1974, and I’m on the west side of campus, standing in front of the massive trunk of a California live oak. Its knobby bark slopes away from me up into a welter of limbs and leaves, and I’m reviewing the handholds and footholds I will use to climb it. With a running start to get past the smoother lower trunk, I step, grab and pull until, 14 feet up, I arrive at a platform hidden in the green canopy. I’m home.

A free-spirited dormmate had built the minimal structure three years earlier as an escape from Trancos. Now it’s a solution to my Stanford housing problem. Before summer scattered everyone, my share of rent for a nice College Terrace house had been $100 per month. Returning alone in September, I found nothing affordable, and the treehouse seemed my best option.

Furnishing it is simple. With block and tackle, I hoist my steamer trunk, my homemade desk and a chair. I rig the back seat from a friend’s VW Bus so that it rocks below a higher limb. After one long night of fearing I’d fall out of my hammock while sleeping, I acquire a mattress. Unseasonal rain means a new canvas tarp comes next, cutting off the dappled sunlight that has been so lovely to wake up to. Not so pleasant is discovering that thousands of little black ants forage in my tree. A stripe of pentachlorophenol painted around the perimeter keeps them away.

Now I have a 64-square-foot ant-free zone for cooking and sleeping. I have the envy of all my friends. With a bit of coaching, most figure out the moves needed for ascent. We hang out in the peaceful greenery. Even my recently ex-girlfriend, lured by the exotic setting, climbs up for a last visit.

It’s not too tragic when a campus cop shows up to evict me during finals.

There are academic benefits, as well: I spend more and more time studying in the library, where it’s warm. By late fall, short days, cold winds and sideways rain are eroding the appeal of life without walls. It’s not too tragic when a campus cop shows up to evict me during finals. My next residence: a two-car garage in Mountain View.

I couldn’t know then that this arboreal interlude would be a first act in a life filled with alternative ways of staying warm, dry, fed and safe. Here in southeast Alaska, home has at times been a tent in a mining camp, a cabin at my oyster farm, a float house, various communal arrangements, renovations-in-lieu-of-rent deals and more boats than could be described on one page.

Even my children seem to have picked up this think-outside-the-mortgage lifestyle, creating unusual living arrangements from Banderas Bay, Mexico, to the center of Seattle. Perhaps it’s partly from hearing stories of their dad’s tree.

When I took them to visit Stanford in 1997, the tree was gone, likely downed by a winter storm. A jagged stub showed a couple of my old footholds on one side and, on the other, the rot that proved fatal.

In memories and old photos, it remains a trusty tree, strong and sheltering, where I lived well with very little.

John Church, ’75, lives on Wrangell Island, Alaska, and is owner and operator of the F/V Corvus.

Moving In with Mom

What a partnership with two caregivers taught me about family.