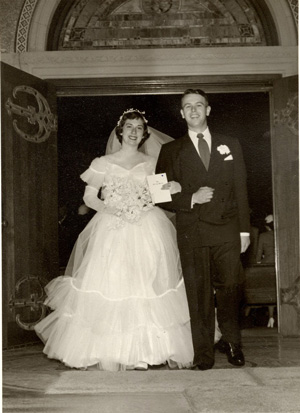 As a Stanford undergrad, Joe Coulombe met Alice Steere, ’53, MA ’54, and was introduced through her family to dishes far removed from his paternal grandmother’s New England boiled dinners and what he once described as the “Southern suicide cuisine” his mother’s folks served: “a lot of bacon fat poured on greens.” At the home of his future in-laws, he sampled Dungeness crab and sourdough bread, steamed artichokes, jug wine and olive oil. “Think of it. I’d never even seen olive oil,” he told Los Angeles magazine.

Roughly 15 years later, Coulombe opened Trader Joe’s, an innovative grocery store, rich with personality and both basic and offbeat products, that would amass a cultlike following.

Joseph Hardin Coulombe, ’52, MBA ’54, grew up on an avocado farm near San Diego, served in the Air Force and spent a decade in the grocery business before launching Trader Joe’s in 1967. He died February 28 at his home in Pasadena, Calif. He was 89.

Starting in 1958, Coulombe ran a string of convenience stores—until he was persuaded to try something new. The tuition assistance offered by the GI Bill was changing the culture of the country, he believed. So when he conceived of Trader Joe’s, he selected store locations near centers of learning, he explained in a 2011 interview, because he figured educated people wanted something different. “Trader Joe’s is for overeducated and underpaid people, for all the classical musicians, museum curators, journalists—that’s why we’ve always had good press, frankly!”

Coulombe said one of his guiding principles was to avoid badgering customers. “When I was selling Kirby vacuum cleaners at Stanford door-to-door, that’s where I learned negative selling,” he said in 2011. “You go in and say, ‘Well, I really don’t think you can afford this.’ ” He later learned a better way. “You never give an order to a customer.”

The stores—now totaling more than 500 in 42 states—are distinctive for their tropical vibe and friendly staff in Hawaiian shirts. Coulombe’s initial inspiration, according to his son, Joseph, was Trader Horn, the memoir of an African adventurer that he discovered at his in-laws’ house. Besides TJs’ wide-ranging, quirky product line and emphasis on healthy foods, the stores popularized the inexpensive Charles Shaw wines, priced at $1.99 and known as Two Buck Chuck.

Coulombe sold the grocery chain to the German company Aldi in 1979 but stayed at the helm until he retired in 1988.

He and his wife loved attending the opera and tasting wines, according to Carol Fagan Henry, ’61, MA ’62, a philanthropist who co-founded the Los Angeles Opera with Alice Coulombe and others. Henry and her husband, Warner, ’59, MBA ’63, visited Paris with the Coulombes. “We loved fine and simple dining and wine tastings,” Henry says. “There was no Two Buck Chuck in our lives.”

In addition to his wife of 67 years and his son, Coulombe is survived by his daughters, Charlotte Schoenmann, ’81, and Madeleine, and six grandchildren.