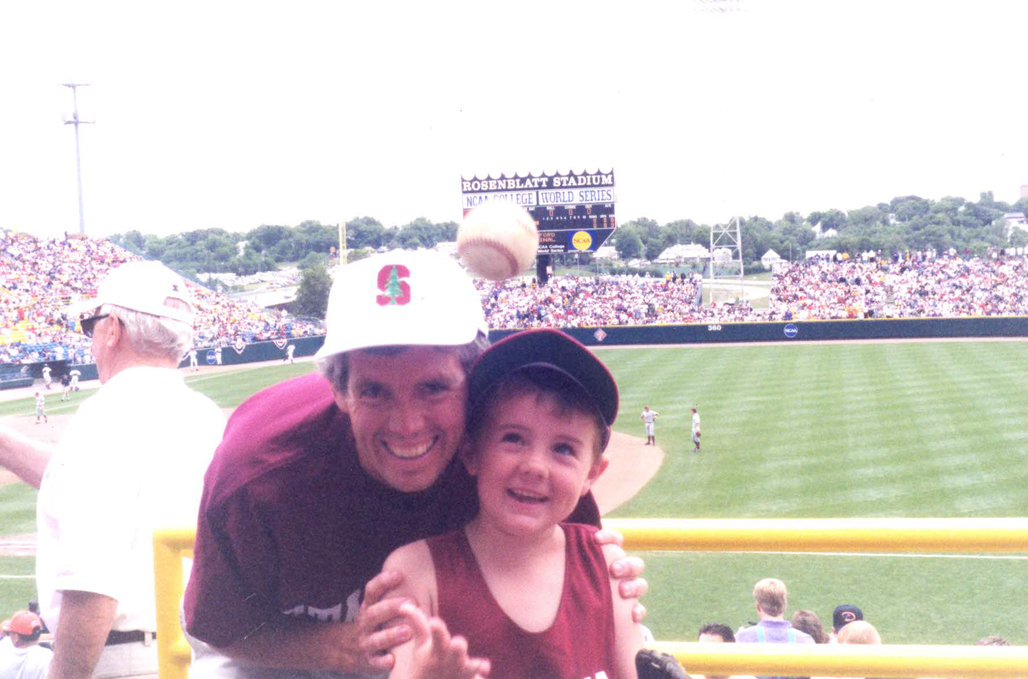 The streak is over!

Not “the Streak” of 45 years with at least one Stanford NCAA team championship. (To put that into perspective, consider that the second-longest active streak is three years.)

The other streak started Friday, June 18, 1999, when I drove with my 5-year-old son, Nathaniel, from our home in Columbia, Mo., to Omaha, Neb., hoping to see Stanford in the championship game of the College World Series. Halfway to Omaha, we caught the scratchy distant radio station reporting on the semifinal game that would send its winner to the championship: “In one of the greatest comebacks in College World Series history, Stanford scored seven runs in the seventh inning to take a two-run lead on Florida State. They are now just three outs away from the championship game.”

Then we lost the station completely. When we finally got it back, near Omaha, we learned that Florida State had tied the game in the ninth with their own comeback, and then won it in the 13th. There was no championship game for Cardinal baseball that year.

That should have been a hint. Instead, it was the start of our quest. Nathaniel and I were determined to see Stanford win a national championship in person. When a Stanford team qualified for the postseason near us, we would drive or fly to cheer for them. Over time, we stretched the phrase near us quite a bit.

In the early days, though, a lot of the trips were to Omaha, where we saw six national championship runs end for Stanford baseball and volleyball teams, usually in championship games.

We kept going, always heading to the game with hope in our hearts and always returning bummed out. Many who saw that disappointment wondered why we cared so much. But fan is short for fanatic. We were Stanford fans, so we cared. A lot.

Much as we hated to keep seeing Stanford lose, we loved those trips. Some dads and sons fish, hunt or camp together. Nathaniel and I took trips to see Stanford in the postseason. It was our thing.

If it was painful for us, what must it have been like for the women on those teams?

By the time Nathaniel graduated from high school in 2012, we had taken 17 trips, covering 6,750 air miles and 12,954 car miles, to see Stanford play postseason softball, baseball, volleyball, football, and men’s and women’s basketball. In those years, Stanford won 27 championships—just not before our eyes. On every single one of those 17 trips, we left a stadium or arena massively bummed. But we never gave up hope.

Somewhere along the way, the women’s basketball team became the main source of that hope. They had many good years with long postseason runs. In 2005, in Kansas City, we saw a glorious upset of the hated University of Connecticut, only to return two days later to see a loss to Michigan State. In 2010 in San Antonio, we exulted in Stanford’s halftime lead over UConn, only to see it disappear into a six-point loss. Later we learned that Stanford’s star center, Jayne Appel Marinelli, ’10, courageously played that game on a broken foot. In 2011, our bags were packed for a trip to Indianapolis to see the championship game, but Texas A&M made a basket with three seconds left in the semifinal game to beat Stanford by one point. In 2012 in Denver, we saw Stanford surprisingly hang with everyone’s pick to win the national championship, Baylor, for the first half of the Final Four match, then fade.

Those and other Stanford women’s teams were very good. But somebody else always had a little bit more talent. Or better luck. Or both. Stanford was exhilaratingly close to several national titles, but painfully never got over the top.

If it was painful for us, what must it have been like for the women on those teams? And how about their coach, Tara VanDerveer, who saw all that pain up close and personal?

Yet she kept coming back for more. Even more than her amazing scouting reports (bolstered in recent years by Kate Paye, ’95, JD/MBA ’03) and superb strategy, it was her persistence in the face of heartache that made her my favorite coach—and Nathaniel’s too. As boxer Floyd Patterson, my boyhood idol, used to say, it’s not about how many times you end up on the canvas. It’s how many times you get up. Tara VanDerveer has been getting up from the canvas for an awfully long time.

Those regular trips to Stanford postseason games are long gone. As every parent knows, time flies by quickly. Nathaniel has embarked on his own adventures. 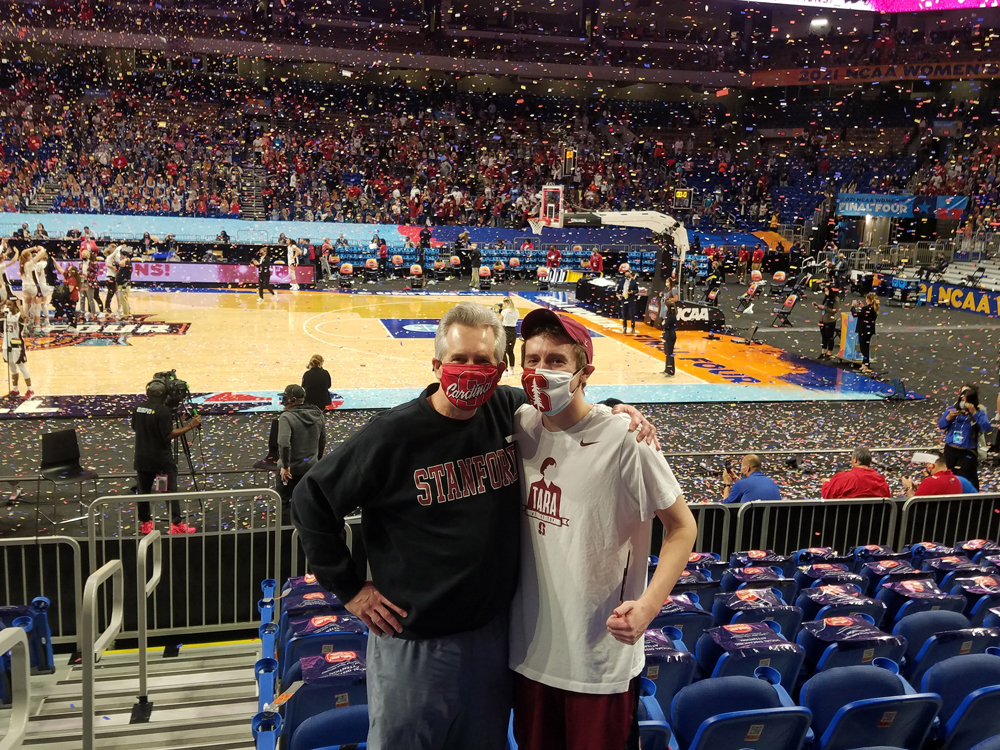 But we didn’t give up all hope. For old times’ sake, we went to Dallas when the Stanford women were in the Final Four in 2017, battling to a halftime lead and then gamely fighting South Carolina to the bitter end despite (once again) having lost a key player, Karlie Samuelson, ’17, to injury midway through the second quarter. When we left after that game, I declared that I would never again step foot in the state of Texas, because we had been through enough heartbreak there.

Stanford sports remain a favorite topic of conversation for Nathaniel and me, however. Every year, we fret about whether Stanford can keep the Streak alive. This year, when the men’s water polo team lost in the semifinals, things looked pretty bleak, as the team was our pick as the best hope for the Streak.

But Nathaniel, who has become a basketball guru, had faith. “Dad, I think the women have a chance this year,” he suggested early in the season. Though he now attends graduate school at another university, the women still means Stanford for Nathaniel, who remains fiercely loyal to his parents’ alma mater.

It was an unusual assessment. After spending 22 years watching Stanford get close, Nathaniel is not prone to overestimating his beloved team’s chances. To tone it down, he quickly added that COVID-19 could knock out any team, including Stanford, and that there might not even be an NCAA tournament. But, he added hopefully, “They won’t allow any fans at the Final Four this year, if they have it, so we can’t jinx them by being there.”

It was, in part, a prophetic prediction. COVID-19 restrictions did seem to stack the odds against our team. The Stanford women played “home” games in four places (Las Vegas, Santa Cruz, Pullman and Palo Alto). They were on the road for a total of 87 nights.

Furthermore, Nathaniel was right in his assessment of Stanford’s strength. In the early NCAA tournament rounds, Stanford had decisive wins over Utah Valley State, Oklahoma State, Missouri State and even (after a rather horrendous first half) Louisville.

But Nathaniel’s prediction was wrong on other fronts. The NCAA allowed a few fans—about 17 percent of the Alamo Dome’s capacity—to attend the Final Four. And I put aside my vow to never again step foot in Texas, so we were there.

Stanford’s A game was absent in San Antonio, but its spirit was not. We (if a fan is allowed to say “we”) survived a nail-biting semifinal to beat South Carolina by one. Then a bumpy ride through the final game led to a one-point lead and possession of the ball with 36 seconds to go against a scrappy Arizona team in the final. So we had a chance.

But we botched that possession, turning the ball over on a shot clock violation without even sniffing a shot. Naturally, Arizona called a time-out to set up its game-winning play.

That 30-second time-out was interminable. All of those almosts in all of those Stanford games we had seen over all of those years came flooding back. I started to think, “Maybe we really are bad luck. We should never do this to a Stanford team again. From now on, we have to stay away.” Though he was right next to me, I couldn’t look at Nathaniel or say anything to him.

You were the heroes of my son’s childhood, and children deserve good heroes.

Then, realizing how silly it is for a fan to think that way, I turned my thoughts to Tara VanDerveer. How cruel can basketball be? How could it get her this close just to crush her again? And what about the players who endured all those days away from home?

One thought never crossed my mind during that time-out, I am sorry to say. I never thought we would win. We had been through this enough times to know what to do now: best to just realize what was about to happen and start the process of dealing with it.

Arizona took the ball out right in front of us. Everyone who was watching, at the Alamo Dome or elsewhere, knew that Arizona’s star player, Aari McDonald, would get the ball.

She did. But Stanford senior Anna Wilson immediately got right into her grill. Junior Lexie Hull double-teamed her. Then freshman Cameron Brink joined the party. It was gorgeous swarming defense. After unsuccessfully maneuvering for room, McDonald, who had canned several three-pointers, launched one toward the basket while fading away from the pressure.

The shot hung in the air. Then struck iron. Then bounced away.

Some have said it was an ugly win, but they are wrong. It was a thing of sheer beauty.

Many thanks to sophomore Haley Jones, who was the Final Four’s Most Outstanding Player. To the aforementioned trio that built that defensive wall that stopped Arizona. To sophomore Ashten Prechtel, who saved the season with brilliant second-half play against Louisville. To senior Kiana Williams, the glue of the team. And to their teammates. As you know, you ended Tara VanDerveer’s 29-year streak without a championship. Though you didn’t know it, you also ended the Easton boys’ 22-year streak. Though you did this, and appropriately so, for one another, we will be forever grateful to you for stopping both streaks. And for that long-awaited bear hug we shared amid the confetti.

But many thanks, also, to Michelle Smith, ’08. To Chris Hernandez, ’05, MA ’08. To Erin Waller Meredith, ’09. To Ryan Garko, ’03. To the Ogwumike sisters, Nneka, ’12, and Chiney, ’14, and the Collins and Lopez twins—Jarron and Jason, ’01, and Brook and Robin, ’10. To Foluke Akinradewo, ’09. To Brooke (with the Hook) Smith Easter, ’06. To Mark Madsen, ’00, MBA ’12. To Candice Wiggins, ’08. To Leah Nelson, ’05. To so many others who donned Cardinal uniforms and played valiantly in games and seasons that did not end the way you, and we, wanted them to end. You were the heroes of my son’s childhood, and children deserve good heroes. You filled his dad with road-trip memories that will comfort him in his old age.

The streak is dead.

Steve Easton, JD ’83, lives in North Dakota with his wife, Marivern (Slaveck, ’86), and is president of Dickinson State University. Nathaniel Easton is pursuing his PhD at the University of Connecticut, of all places (but his heart still belongs to the Cardinal). Email Steve at stanford.magazine@stanford.edu.