All eyes were on Facebook last week as a former product manager turned whistleblower testified before a Senate subcommittee, saying that the company puts growth over user safety and well-being in a number of areas, including research that shows teenagers feel worse after using its products. Writing in the New York Times, Roddy Lindsay, ’07, a former data scientist at Facebook, proposes changing the incentive structure, which, he says, drives the problem. Currently, social media companies have every economic motivation to keep users engaged. Thus, their algorithms are supercharged to present us “the most titillating, inflammatory content.” In response, he writes, lawmakers need to put teeth into a disincentive by amending Section 230, the 1996 law that shields social media companies from liability for most user-generated content. “Companies that deploy personalized algorithmic amplification should be liable for the content these algorithms promote,” he writes. Any so-called amplification law, though, would face significant free speech hurdles. “Harms attributable to amplification are real,” writes Daphne Keller, director of the program on platform regulation at Stanford’s Cyber Policy Center. “The constraints created by First Amendment law are also real. Any paths forward will require precision and realism about both.”

Worth waking up for.

Guido Imbens was deep asleep at 2 a.m. when the call from Stockholm came. He had won the 2021 Nobel Memorial Prize in Economic Sciences along with two close friends: UC Berkeley’s David Card and MIT’s Joshua Angrist (who was best man at Imben’s wedding to Susan Athey, PhD ’95, also an economist at Stanford). “To be sharing this prize with both of them is immensely gratifying,” said Imbens, an applied econometrics professor and professor of economics at the Stanford Graduate School of Business. Imbens and Angrist were recognized for developing tools that help economists draw precise conclusions from complex, real-life situations, like how extending compulsory education affects earnings. “Their research has substantially improved our ability to answer key causal questions, which has been of great benefit to society,” Peter Fredriksson, chair of the Economic Sciences Prize Committee, said of the three winners. The early morning celebrations also woke Imben and Athey’s three kids. Sylvia Imbens, 10, says she’s still fuzzy on the details of her dad’s work but very aware of his dedication. “I know how much effort he puts in, so it feels very satisfying for him to get recognition,” she told the Stanford News Service.

When it comes to healthy eating, the wetter the better, apparently. A team of researchers, including scientists at Stanford, have compiled a database comparing the nutritional values of thousands of aquatic-sourced foods with those of land-based crops and livestock. The results show that “blue foods”—as aquatic-sourced sustenance is sometimes called—generally offer higher nutritional value than terrestrial alternatives. The database’s top six categories of nutrient-rich, animal-source foods are all aquatic, including shellfish, salmon and a variety of pelagic fish, such as sardines, tuna and mackerel.

The results suggest that blue foods could play a major part in reversing the global malnutrition crisis, which is often exacerbated by calorie-rich, nutrient-poor foods common in Western diets. With investment and innovation in aquaculture, the research says, it’s possible to drastically increase consumption of blue foods while reducing both its cost and the demand for red and processed meats. Such a change, the scholars say, could reduce risks of hypertension, stroke, heart disease, colorectal cancer and breast cancer in addition to ending micronutrient deficiencies for 166 million people. 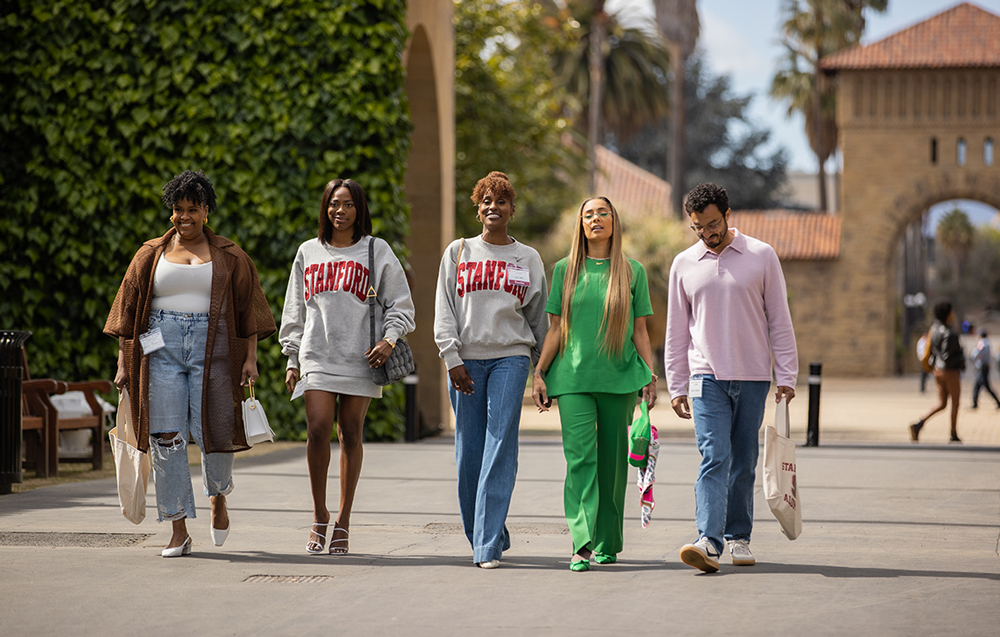 A return to the Farm is still nine days away for alums in a reunion year (there may or may not be a paper chain countdown in our office), but Issa Rae, ’07, got an early dose of nostalgia when she filmed part of the final season of HBO’s Insecure on campus. In the story, her character is back to speak on an alumni panel—and as far as we’re concerned, the Quad is a shoo-in for Best Supporting Backdrop. You can see more of Stanford in the Insecure season trailer.

Children leaving the juvenile justice system face a hard road for a range of reasons, not least the stigma of being viewed as troublemakers. But a 15-month pilot project led by Stanford researchers working in Oakland showed a positive relationship with a single teacher can dramatically decrease a kid’s odds of committing another crime. In the study, students who had recently reentered the school system from juvenile detention were asked to name a teacher they thought could help them. The teacher was then sent a letter that included a section written by the child about their hopes and dreams. The rest of the letter, written by the researchers, emphasized the important role of teachers in a student’s life and the fact that the student had chosen them personally. The results were stark. In the control group, where no letter was presented, 69 percent of students returned to juvenile detention within the next semester of school. But among students whose teachers received the letter, that rate was 29 percent. “The letter that the teacher received allowed the student to tell their story to that teacher and tell it in a way that the teacher was committed to their success,” Jennifer Eberhardt, a professor of psychology, told the Stanford News Service. “That mattered, because it’s not researchers, it’s not administrators, it’s the student identifying the person that they think would be best for them to partner with on this journey back to school.”

The other greenhouse gas.

When it comes to greenhouse gases, carbon dioxide gets virtually all the attention and most of the research money. But a pair of Stanford-led studies underscores the need to focus on another heat-trapping gas: methane, whose relative concentration has grown more than twice as fast as that of carbon dioxide since the beginning of the Industrial Revolution. Removing three years’ worth of human-caused methane emissions would reduce global surface temperatures by approximately 0.21 degrees Celsius, the analyses reveal, while reducing ozone levels (and thereby improving air quality) enough to prevent roughly 50,000 premature deaths annually due to respiratory illnesses. Alas, methane, much of which comes from the breath, flatulence and manure of livestock (did we mention the upsides of blue foods?), is challenging to capture. New technologies—such as a class of crystalline materials called zeolites capable of soaking up the gas—hold promise, but they require more research and investment. “Carbon dioxide removal has received billions of dollars of investments, with dozens of companies formed,” Rob Jackson, professor of earth system science, told Stanford Earth Matters magazine. “We need similar commitments for methane removal.”

Women newly diagnosed with breast or ovarian cancer who are also carriers of cancer-associated mutations like BRCA1 or BRCA2 are no more likely to die of their tumors than those who don’t have the mutations, according to a new study from the School of Medicine. In fact, they may have better outcomes due to a greater sensitivity to chemotherapy.

Seven-time Olympic gold medalist swimmer Katie Ledecky, ’20, has left the Farm for the University of Florida, where she’ll be a volunteer swim coach and train for the 2024 Olympics.

Ranjita Chakravarty, director of Stanford’s internal audit department, spent time in Los Angeles during months of remote work and made good use of her location by taking a role on the hit Netflix show Never Have I Ever. She plays the protagonist’s grandmother.

Politics and power haven’t changed much since Allen Drury, ’39, wrote his midcentury masterpiece Advise and Consent. But trust has.

Commuting again and need a way to make the miles go faster? Check out these podcast recommendations from faculty at the GSB.

Gimme dopamine; what the frosh are reading; wildfire