How to have better relationships; stress vs. anxiety; some political stuff

Your mom was right: Just be yourself.

David Bradford and Carole Robin, two longtime instructors of the Graduate School of Business course Interpersonal Dynamics (aka Touchy Feely), have written a book based on the course. At the heart of the legendary elective are sessions that help students discover more about themselves and learn that revealing their true selves to others can lead to stronger, more meaningful connections. “Students learn they’re more likable and more interesting to their fellow students when they stop spinning their image and let others know who they really are. That, in turn, leaves them feeling known and affirmed in ways that many have never experienced in their life, which is one reason they describe this course as life-changing,” Robin says.

Good timing, given how hard it can be to connect with anybody these days. But there’s hope. “One of the most striking observations we’ve had over the years is that deep, fulfilling, personal connections can happen with a wider range of people than we normally think possible. We can develop an exceptional relationship with someone whom we seem, outwardly, to have little in common with. We’ve seen it happen, again and again, in both personal and professional settings,” Bradford says.

This is your kid on screens.

If you gave up on policing your kids’ screen time early in the pandemic, well, so did everyone else. But what about when things return to some semblance of normal? “There will be a period of epic withdrawal,” psychology professor and addiction specialist Keith Humphreys told the New York Times. Weaning the kids off the Nintendo Switch is possible, he says, but it’s complicated by the fact that for months they’ve been learning, socializing and recreating via screens, making it hard to untangle the rewards their brains get from their devices—not unlike when someone’s used to smoking and drinking with friends and then tries to quit smoking without quitting the drinking and the friends.

Moving forward while still trying to understand the past.

Stanford scholars break down the challenges facing the Biden administration and what the president’s first decisions mean for the United States. In a Washington Post opinion piece, Hoover fellow H.R. McMaster, retired U.S. Army lieutenant general and former National Security Advisor, digs deep into Trump’s policies toward China and discusses why he hopes President Biden will preserve aspects of them.

It’s been nearly three weeks since rioters entered the Capitol. Missouri Sen. Josh Hawley, ’02, who objected to certification of the election later that night, defended his decision in a Missouri Times op-ed on January 13. “Let me say again, as I have said before: The lawless violence at the Capitol last week was criminal. . . . But democratic debate is not mob violence. It is in fact how we avoid that violence,” he wrote. Professor emeritus of history David M. Kennedy, ’63, whose praise of Hawley in a 2019 STANFORD story about that year’s congressional freshmen has drawn media attention, told the Financial Times that he remembers Hawley as one of his most gifted students, and was “perplexed” by his decision. “Am I surprised by what happened?” he said. “Yes. Am I disappointed? Yes.” Last week Sen. Dianne Feinstein, ’55, defended Hawley’s right to object to the election results, telling reporters at the Capitol, “I think the Senate is a place of freedom. And people come here to speak their piece, and they do, and they provide a kind of leadership. In some cases, it’s positive, in some cases, maybe not. A lot of that depends on who’s looking and what party they are. But it’s an important place to have this kind of dialogue. It’s probably the highest-level dialogue that you get in an electoral body.”

And now for a look at the bigger picture. 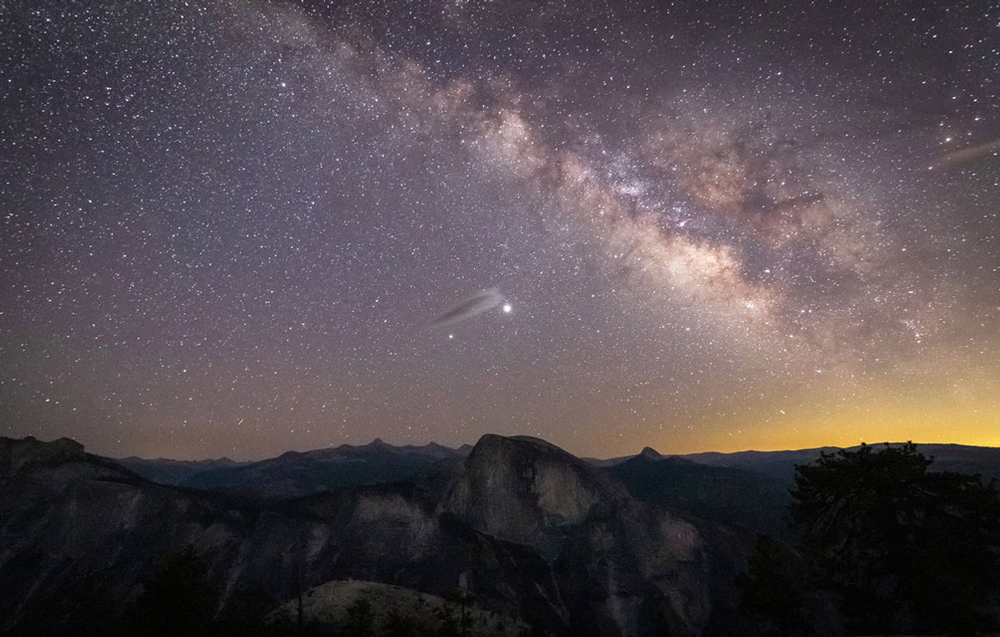 Energy resources engineering PhD candidate Nora Hennessy, MS ’17, took first place in the Stanford Earth 2020 photo contest’s landscape category with this photograph of the Milky Way rising over Half Dome in Yosemite. It’s the third year in a row that a shot of our spiral galaxy has won a photographer top prize—maybe because the velvety vastness of the universe kind of puts things in perspective?

On January 1, Sammy Potter and Jackson Parell, both ’22, who bonded sophomore year over their love of outdoor endurance events, set out to hike the Appalachian, Pacific Crest and Continental Divide trails, a 7,940-mile trek known in hiker circles as the Calendar Year Triple Crown. And they want to finish before classes start in September. “Nature isn’t different now than it was when COVID started. It’s probably the only thing that isn’t different,” Potter told the Los Angeles Times, adding that the nine-month journey feels “like a crazy opportunity to just get in touch with something that has been the same for hundreds of years and is doing its own thing.”

Which came first, the chickpea or the egg?

While in quarantine, Grace O’Brien, ’19, concocted Peggs (as in plant-eggs), a shelf-stable vegan egg substitute made from chickpeas, flax and potatoes. Producing Peggs uses 90 percent fewer resources and generates half the greenhouse gas emissions compared with the kind laid by chickens, says VegWorld magazine, and you can use them “just like regular eggs.”

More than a century ago, “the oil, railroad, telegraph and power industries created huge monopolies,” says historian and Hoover senior fellow Victor Davis Hanson, which some likened to “octopuses whose tentacles strangled freedom.” Trump’s social media accounts being canceled, he says, shows that we’re dealing with a “new electronic octopus.”

If you’ve watched a cartoon or played a video game in the past few years, you’ve probably heard the voice of former Stanford Improvisor Greg Chun, ’93, who has brought more than 150 characters to life in ads, animated series and video games, including World of Warcraft.

Salma Mousa, PhD ’20, a postdoctoral scholar at Stanford’s Center on Democracy, Development and the Rule of Law, wanted to know whether playing on the same soccer team could change attitudes between displaced Iraqi Christians and Sunni Muslim Arabs—two groups with a history of resentment and mistrust and few opportunities for contact. What she found was that under the right conditions, playing on a diverse soccer team could reduce prejudice and increase tolerance.

If history is any guide, those stimulus checks won’t do much to boost the economy, write Hoover Institution senior fellows John F. Cogan, professor of public policy, and John B. Taylor, professor of economics, in the Wall Street Journal; people spend more when their long-term income rises.

Is that feeling stress, worry or anxiety? Understanding the difference, says Rosan Gomperts, director of the Stanford Faculty Staff Help Center, can help with treatment—as can learning to recognize symptoms of the early stages of anxiety.

“Twenty-three things I miss about Stanford”: To comfort fellow students while they’re away from the Farm, sophomore Ecy King writes about the little things that made being on campus great. Number 23? “Seeing Stanford full of life, anywhere, any day, any time and being grateful to be alive and here and well.”

Book lovers’ gift guide; experts predict life in 2021; the Axe is back