An attack on the Capitol.

“What is occurring is the product of years of disinformation and rising extremism and defection from democratic norms, particularly on the extremist right,” Larry Diamond, ’73, MA ’78, PhD ’80, a senior fellow at the Hoover Institution and at the Freeman Spogli Institute for International Studies, told the News Service on January 6. Eight scholars provided analysis of what led to Wednesday’s attack on the U.S. Capitol and what should happen next, including whether the president can be held legally liable for those acts. Law professor David Sklansky, who co-directs the Stanford Criminal Justice Center, said that whether Trump’s offenses are prosecutable is not straightforward, but they are impeachable. “The standard for impeachment is ‘high crimes and misdemeanors,’ which is a term meaning, essentially, abuse of power. And it is hard to think of a clearer violation of office, or a more dangerous abdication of duty, than refusing to acknowledge the result of an election voting you out of office, encouraging your supporters to prevent the lawful transfer of power and congratulating them for their violent efforts to do just that.”

Law professor Michael McConnell, a senior fellow at the Hoover Institution and director of Stanford’s Constitutional Law Center, explained to Stanford Lawyer how both the 25th Amendment and impeachment work, and why he believes impeachment of President Trump is the preferred action in this case. And Rep. Ted Lieu, ’91, of California, quickly co-drafted articles of impeachment against President Trump. In an LA Times op-ed on January 10, Lieu described some of the events from his perspective and why he believes impeachment is necessary—to remove a dangerous president, to prevent him from running for office again, and to show future generations that Congress acted swiftly and forcefully after insurrectionist attacks. “The president incited an attempted violent overthrow of Congress in broad daylight. Several people died,” he wrote. “This was a frontal assault not only on Congress, but on our Constitution and our democracy. If the impeachment provision of the Constitution is not invoked for this situation, then what the hell is it for?”

For a deeper dive into the state of democracy in the United States, the Freeman Spogli Institute is hosting the panel January 6 and the Crisis of American Democracy on January 14. Speakers include Larry Diamond, whose book Ill Winds: Saving Democracy from Russian Rage, Chinese Ambition, and American Complacency inspired a 2019 STANFORD story on democracy.

Statements from Stanford president Marc Tessier-Lavigne and Hoover Institution director Condoleezza Rice on Wednesday expressed dismay at the attack on the Capitol, as well as faith that democracy will prevail. “The desecration of the U.S. Capitol building is a flagrant violation of the rule of law and an attack on the democratic processes that have been underway,” Rice said. “Those who participated should be prosecuted to the fullest extent of the law.” Some international students said the attack has changed their view of the United States. “As an international student, you idealize [the U.S.] a little bit,” Lore Vazquez Olivera, ’22, told the Stanford Daily. “You think this is the best country in the world, this is the definition of democracy, this is the moral standard.”

A number of Stanford alumni in Congress called for the removal of President Trump and also denounced the actions of Sen. Josh Hawley, ’02, of Missouri. Hawley was the first to announce, on December 30, that he would object during the Electoral College certification process. He stayed the course even after the attack, objecting to certification of the electoral votes from Arizona and Pennsylvania. Sen. Tina Flint Smith, ’80, of Minnesota, is among those who have publicly called for Hawley to resign.

What the world needs right now is a shot in the arm.

As the federal government adjusts its COVID-19 vaccination rollout to release more vaccines to states rather than holding half in reserve for second doses, a Stanford study shows support for a flexible strategy. The researchers found that reserving only 10 percent of the available doses and giving out the rest as first shots when cases are spiking (then rebuilding reserves in later cycles) could prevent up to 29 percent more COVID-19 cases in the near term.

Meanwhile, researchers in the lab of biochemistry professor Peter Kim are working to develop a single-dose vaccine for COVID-19 using nanoparticles containing the same proteins that make up the virus’s spikes. It’s early days, but if they’re successful, the vaccine should be inexpensive to produce and easy to transport—possibly even as a freeze-dried powder, Kim, Phd ’85, told Stanford News Service. (For the curious, the story explains how nanoparticle vaccines, nucleic acid vaccines and viral-based vaccines compare in terms of effectiveness and ease of use. And here’s a refresher on how mRNA vaccines work in the body to prevent infection.) 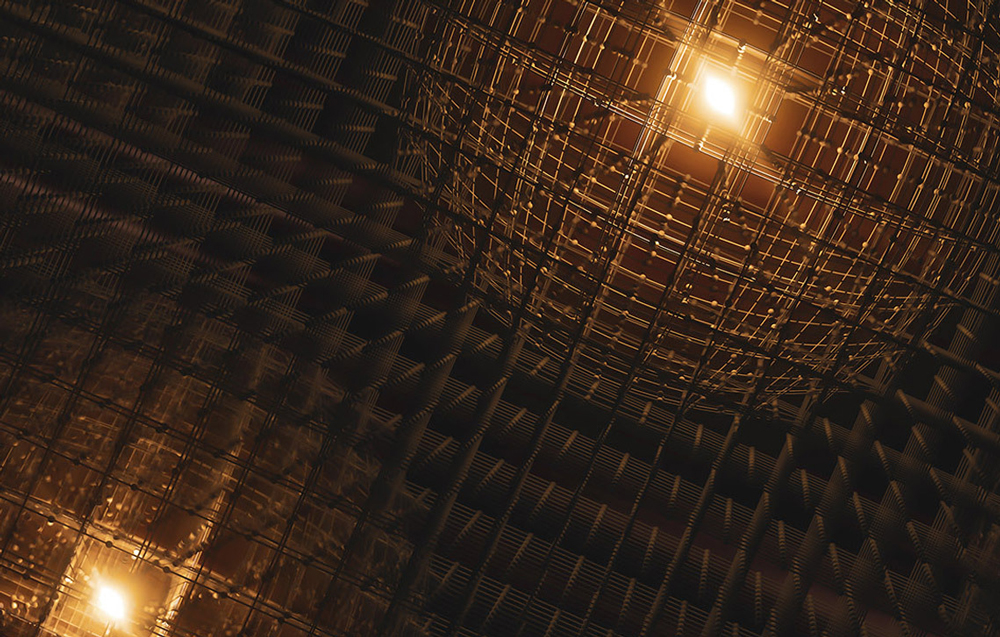 Polarons are distortions in a material’s atomic lattice that form around a moving electron and then quickly disappear. Scientists at SLAC and Stanford  observed for the first time how these “bubbles” of distortion form in lead hybrid perovskites, which are promising next-generation energy materials. Their findings may help explain why these materials are so good at turning sunlight into electrical current in solar cells. “These materials have taken the field of solar energy research by storm because of their high efficiencies and low cost, but people still argue about why they work,” said Aaron Lindenberg, associate professor of materials science and engineering and of photon science, who led the research. “The idea that polarons may be involved has been around for a number of years, but our experiments are the first to directly observe the formation of these local distortions, including their size, shape and how they evolve.”

How do Norwegians endure harsh winters, especially in areas where the sun doesn’t rise for two months? Stanford scholar Kari Leibowitz, MA ’18, spent a year living 200 miles north of the Arctic Circle and found that a positive wintertime mindset was associated with greater well-being by every measure.

“I originally went to understand how they survived during the winter. But people in Norway didn’t see it so much as something to survive—they saw it as an opportunity for lots of things they loved: outdoor activities like cross-country skiing but also special, cozy time indoors,” the PhD candidate in psychology told Stanford News Service. This mindset could likewise help people look more positively on sheltering in place, though of course, she notes, living in a magical winter wonderland isn’t the same as enduring a pandemic. “I think it’s really important to let people mourn and grieve and not diminish the extremely real hardships people are facing. Instead, it’s about focusing on what we can control and trying to make the best of a bad situation.”

Never misplace the keys to your memory palace again.

Well, this is frustrating. You powered through an in-depth article about a super interesting and timely topic this morning. Now you’ve got a great opportunity to bring it up in conversation. Only you can’t remember some of the key details. Or what the article was called. Or where you read it. The good news is, you can improve your recall, says Kevin Madore, a postdoctoral fellow in the Stanford Memory Lab. Madore has studied the neural activity and pupil size of subjects to determine why some people remember information better than others. He offers three tips for boosting your recall skills. One thing that will help, he says, is cutting down on media multitasking. “People say they’re great multitaskers: ‘I can do 17 things at once.’ And that’s not really how the brain works.”

Deborah Rhode, a legal ethics pioneer who joined the Stanford Law School faculty in 1979 as its third female professor, has died. “She was a pathbreaker. A towering intellect, her dazzling ideas ignited scholarly inquiry in many critical areas of law—not just legal ethics, where she was the nation’s foremost expert—but also gender studies, access to justice, and leadership,” Stanford Law School professor Nora Freeman Engstrom told Stanford Lawyer.

Because of skyrocketing COVID-19 cases in Santa Clara County and the effect that the extended public health restrictions will have on campus life, freshmen and sophomores won’t be returning to campus for winter quarter as previously planned, Stanford president Marc Tessier-Lavigne and provost Persis Drell announced in a letter to the campus community on Saturday. Find answers to FAQs about the winter quarter update and read the Stanford Daily story on students’ reactions.

Was the SolarWinds hack a cyberattack or cyberespionage? The strategies for defending against each are different, says an opinion piece co-written by Hoover fellow Jacquelyn Schneider, whose research focuses on technology, political psychology and cybersecurity.

Tara Vanderveer became the winningest women’s basketball coach in Division I history when the Cardinal beat the University of the Pacific on December 15. It was Vanderveer’s 1,099th win. The women are ranked No. 1 in the nation this season with an 10–0 record.

“A lot of the work I do today is informed by conversations with strangers on the bus.” Climate scientist Daniel Swain, PhD ’16, a Vice magazine “human of the year” and self-professed weather geek, wants to depoliticize science and make it more human.

Take a peek into the life of frosh singer-songwriter Anthony Arya, a former contestant on season 15 of NBC’s The Voice who has been attending classes remotely from his home in Santa Cruz and performing with the Stanford jazz combo using new Stanford-developed software that allows musicians to play together while apart.

If one of your resolutions for 2021 was to ask for a raise, find a new job or be more effective at your old one, Stanfordmag.org’s Work Collection has your back, with expert advice for how to make it happen. Go get ’em—we believe in you.

An Existential Moment for Democracy?

As American leadership falters, scholars say, autocrats are on the rise.

Book lovers’ gift guide; experts predict life in 2021; the Axe is back