Gimme dopamine; what the frosh are reading; wildfire

It’s as plain as the nose on your face.

If the eyes are the window to the soul, what does an entire head reveal? More than you probably dreamed. In a recent study from the Graduate School of Business, more than 1 million social media profile photos were analyzed using a popular facial recognition algorithm. In nearly three-quarters of the cases, the program correctly predicted a person’s self-identified political ideology. “This was just an off-the-shelf algorithm running on my laptop,” says Michal Kosinski, an associate professor of organizational behavior at the GSB and the study’s author. “So there’s no reason to think that’s the best the machine can do.” The results echo Kosinski’s earlier work in which a facial recognition algorithm showed similar success predicting sexuality. Both studies raise troubling questions about how much even the most innocuous photos divulge. “By running studies of this kind and trying to quantify the dangerous potential of those technologies, I am, of course, informing the general public, journalists, politicians and dictators that, ‘Hey, this off-the-shelf technology has these dangerous properties,’” he says. “And I fully recognize this challenge.”

One sec, we just need to reply to a text.

People often joke about their smartphone addiction, but Anna Lembke, MD ’95, professor of psychiatry and behavioral sciences at the School of Medicine and author of Dopamine Nation: Finding Balance in the Age of Indulgence, means it in the starkest terms. The phone, she says, is “the hypodermic needle for a wired generation.” And as the metaphor implies, the results aren’t pretty. Lembke sees an increasing number of young patients suffering depression and anxiety as the result of digital addictions, including to video games, texting, tweeting, online gambling and phones, the conduit to so much else. Each of these modern inventions is fine-tuned to give us little bursts of pleasure—from the Facebook like to the news alert. But the fleeting dopamine highs lead to crashes and the urge for another hit, she explains. As the cycle repeats, we begin needing a fix just to feel normal. “As soon as we stop, we experience the universal symptoms of withdrawal from any addictive substance: anxiety, irritability, insomnia, dysphoria and mental preoccupation with using, otherwise known as craving,” she writes in the Wall Street Journal. To fight back, she recommends limiting digital intake or outright fasting. It’s not easy, but the reward is worthwhile. “If we can keep it up long enough, the benefits of a healthier dopamine balance are worth it,” she writes. “Our minds are less preoccupied with craving, we are more able to be present in the moment, and life’s little unexpected joys are rewarding again.”

Joy ride—the benefits of an indirect path to Hollywood success.

Lisa Joy, ’99, co-creator of HBO’s sci-fi show Westworld, worked for years as a consultant in tech and finance before she got her break in Hollywood as a writer. After all, something had to pay the bills. But now, as producer of the recently released tech-noir film Reminiscence, which she also wrote and directed, Joy is especially thankful for her varied career. “When you’re a producer, it helps to be able to know how money works,” she told the New York Times. “Everything is a language. Math is a language. Computer science is a language. I spend a lot of time trying to be conversational in as many as possible.” Joy talks about her writing process and the fact that from the moment she contemplated directing Reminiscence, she envisioned Hugh Jackman in the lead role. “Hugh has that soulfulness,” she says. “And he can also kick a lot of ass.” In case you missed it, Stanford published a profile on Joy in 2019.

Welcome to the neighborhood. 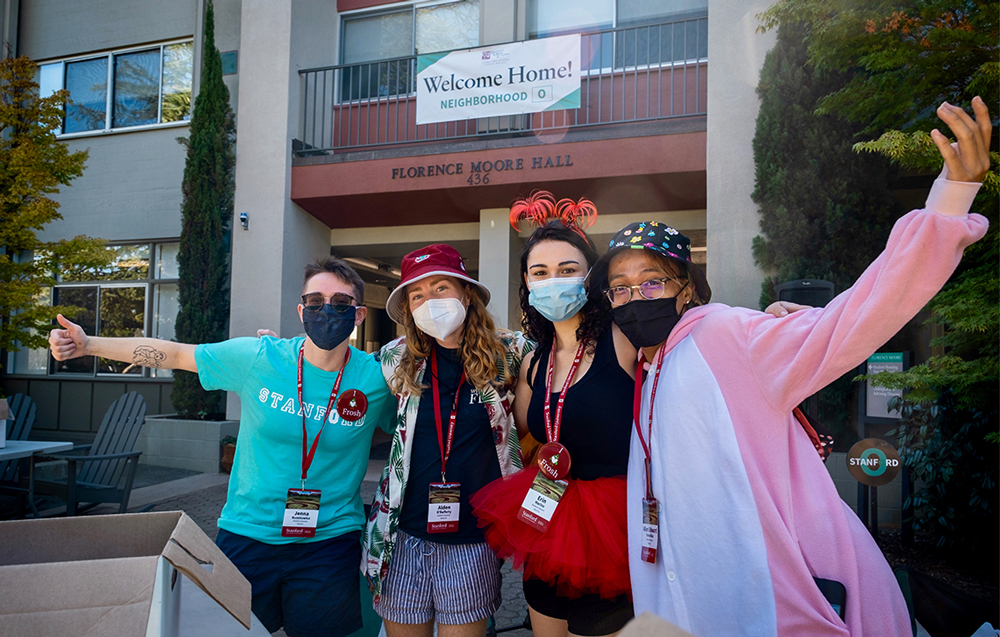 This fall, undergrads return to a reinvented housing system. As the frosh settle into their neighborhoods, they’ll also embark on the newly minted citizenship curriculum. And everyone will set about rebuilding community, face to face. Stanford magazine breaks down the changes and catches up with seven members of the Class of ’24. And yes, there’s a map so you can figure out what neighborhood you would have been in.

If there’s any good news about another ferocious fire season on the West Coast, it’s that, after some nervous moments, Stanford Sierra Camp at Fallen Leaf Lake escaped the Calder fire smoky but undamaged. The big question only looms larger, though: How do we escape the unwanted new tradition of annual infernos, as climate change makes them ever more likely? A 2020 study led by Noah Diffenbaugh, ’97, MS ’97, shows that since the 1980s, California’s rising temperatures and 30 percent decrease in autumn rains have more than doubled the number of fall days with extreme wildfire weather. Diffenbaugh and more than a dozen others at Stanford are part of FIRE, an interdisciplinary group seeking new ways to prevent and control wildfires with everything from microwave tech to viscoelastic goo.

One actor that needs to step up is the U.S. Forest Service, says Michael Wara, JD ’06, director of Stanford’s Climate and Energy Policy Program. The agency’s chief has acknowledged that hazardous fuel treatments need to double or quadruple in scope, Wara says, but leaders have failed to ask for sufficient resources to do so. “This needs to change urgently for California since the Forest Service owns more than half of the forested land in our state,” Wara told Stanford News Service.

Certainly you don’t need to be close to a blaze to have a stake in the issue. According to a study by associate professor of earth system science Marshall Burke, ’02, wildfires now account for up to half of all air pollution in the American West. And recent Stanford research shows that wildfire smoke appears to be associated with about 7,000 premature births in California from 2007 to 2012. Here are some tips to protect against wildfire smoke.

More than two years after the pandemic turned the whole world upside down, members of the Class of 2020 will get a chance for a proper in-person graduation weekend, complete with undergraduate events like Dinner on the Quad, a baccalaureate ceremony and their class time capsule. The 2020 Commencement will be held on June 11, 2022, at Stanford Stadium. And yes, friends, there will be a Wacky Walk. “Nothing can fully make up for the disruptions caused by the pandemic, but we’re excited to host a memorable, meaningful weekend for you and your classmates,” President Marc Tessier-Lavigne said in an email announcing the event.

Read like a frosh. The Three Books assigned to the Class of 2025 were actually two books, a film, a podcast and a TED talk on the theme of “perspective, empathy and hope.”

In the aftermath of his son’s death by suicide, Ivan Maisel, ’81, decided that the best path is candor. He shared an excerpt from his book I Keep Trying to Catch His Eye: A Memoir of Loss, Grief, and Love with STANFORD.

On the 20th anniversary of 9/11, four Stanford experts in national security, terrorism and contemporary conflict—including Hoover Institution director Condoleezza Rice, who was the U.S. National Security Adviser at the time of the attacks—reflected on their memories of that day and on how their teaching of the terrorist attacks has evolved.

Through November 22, any member of the Stanford community (that’s you!) can nominate an alum for the inaugural President’s Award for Public Service and Civic Engagement. Two recipients who “exemplify a life of purpose, impact and action” through public service contributions will be selected annually in the categories of lifetime achievement and/or emerging service leadership.

How did the cat get its stripes? Stanford scientists at the School of Medicine have identified a gene in cats that plays a key role in creating the traditional tabby stripe pattern. Here’s looking at you, @thestanfordcat.

Faculty and alums of the Graduate School of Business found that when men and women negotiate from a similarly weak position, they reach similar outcomes. But when they do so from a position of strength, men outperform women. The authors explain this pattern by noting that women who brought strong backup options to the table were penalized for being too assertive.