Ten months after determining that financial challenges necessitated the discontinuation of 11 sports as varsity teams, administrators announced that those 11 teams would continue at the varsity level. “The financial challenges facing Stanford Athletics are still very real,” said university president Marc Tessier-Lavigne, provost Persis Drell and director of athletics Bernard Muir in a  letter to the Stanford community. “But we have new optimism based on new circumstances, including significantly improved fund-raising potential in support of our athletics programs and improvement in the financial investment markets.”

The planned cuts sparked sustained efforts from current athletes and alumni to reverse the decision. In recent months, university administrators engaged with those groups, including 36 Sports Strong, a group of prominent Stanford alumni athletes who joined together to raise funds and lobby administrators to reinstate the teams. “My heart is full of joy for the students who are getting their teams back,” said Jennifer Azzi, ’90, a former member of the women’s basketball team and a representative for 36 Sports Strong, in a press release. “And as an Olympian myself, I hope Stanford’s action will inspire other NCAA schools in their continued support of their Olympic sports programs.”

Stanford researchers have discovered a new class of biomolecules that could play a significant role in the biology of all living things. The newly observed biomolecule is a small ribbon of ribonucleic acid with a dangling attachment of sugars called glycans. The combination—called glycoRNA—flies in the face of established cellular biology, which holds that cells keep the two types of biomolecules totally apart. “RNA and glycans live in two separate worlds if you believe the textbooks,” said Stanford chemistry professor Carolyn Bertozzi, the senior author of the study. “It’s really a bombshell because the discovery suggests that there are biomolecular pathways in the cell that are completely unknown to us.”

GlycoRNA’s function remains unknown but could be linked to autoimmune diseases. The immune systems of people with lupus, for example, are known to target several of the specific RNAs that can compose glycoRNAs. “When you find something brand-new like these glycoRNAs, there are so many questions to ask,” lead author and former Stanford postdoc Ryan Flynn, PhD ’15, MD ’17, told the Stanford News Service.

Who wants to be a Stanford student?

Luciana Frazão was so convinced she’d been rejected from Stanford that it took her a week to open the email inviting her into the master’s program in mechanical engineering. But getting in was just the beginning of the quest for the Brazilian, who didn’t even have the money to pay for her visa. But Frazão is not one to quit. Her path from Rio de Janeiro to the Farm, as told in Stanford magazine, involves a game show, a surprise benefactor, and equal amounts of pluck and luck. Frazão also shared her story with Stanford’s Meeting the Moment podcast.

A picture is forever. 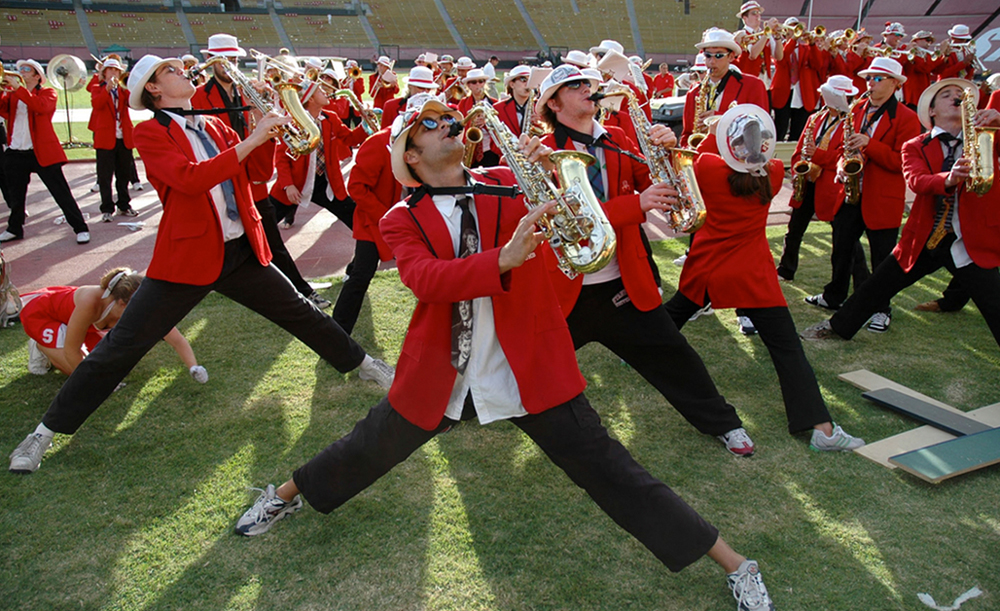 Robby Beyers, ’80, MS ’82, PhD ’89, was easy to miss amid the more exotic plumage of the LSJUMB. But his camera missed little. For more than 40 years, Beyers shot nearly every football halftime show as well as other sporting events, amassing a stunning archive of more than 180,000 photographs that are treasured by generations of musicians, Dollies and Trees. Beyers died in April from ALS.

During her career in Hollywood, Eryn Brown, ’96, has long felt the hostility in her industry toward people with disabilities. After graduating, Brown—who uses leg braces to walk—interviewed at a talent agency only to be told “it would take her too long to go to the bathroom, and she wouldn’t be able to get coffee for clients or walk them to the elevator.” At her first Cannes Film Festival, in 2008, she had to be carried or use a side entrance, away from her clients, to enter the iconic Palais des Festivals et des Congrès. “I actually contemplated leaving the business,” Brown told the Los Angeles Times. “I thought, if I have to go through this dehumanization every year, I don’t think I can do it. I want to be the best at what I do, which involves filmmakers, and Cannes is the pinnacle, so how can I do that?” Thirteen years later, Brown has launched 1in4 Coalition, a grassroots effort calling on studios, talent agencies and others in the entertainment industry to include people with disabilities in their diversity programs.

Over the hill (and it feels so good!)

Aging gets a bad rap, but there are upsides. Even as you get slower, more wrinkly and less energetic (wow, sign us up), you’re likely enjoying a more satisfying life. For 20 years, psychologist Susan Turk Charles, ’91, a psychology professor at UC-Irvine, has studied how we handle and experience emotions as we grow older. On average, she says, older people report higher emotional well-being as well as more satisfying social contacts. “The peak we see in terms of the highest positive and lowest negative emotions is between 55 and 70,” she says.

Getting students’ heads out of the cloud.

The perils of climate change have long concerned Liza Goldberg, ’24. In sixth grade, she wrote in a journal that her goal was to stop it single-handedly. A few years later, she’s open to a team approach. The freshman is working with researchers from NASA and Google to create Cloud to Classroom, an education program that uses satellite imagery to make the science of global climate and environmental change simpler and more accessible to students. For her work, Goldberg was awarded a National Geographic Young Explorers Grant, which she put toward developing the program. “Climate change is really hard for many students to understand through just statistics and news articles,” Goldberg told Stanford News Service. “But when we give them satellite images showing trends like ice melt and forest fire, it becomes a lot easier for them to visualize local to global climate impacts.”

Writer, producer and actor extraordinaire Issa Rae, ’07, is on the cover of the June issue of Vanity Fair. Insecure, her breakout HBO show, is entering its fifth and final season.

Stanford Libraries has created an exhibit about the history of systemic racism against the Asian American and Pacific Islander community.

Sara Cody, ’85, public health director of Santa Clara County, will reflect on the tough decisions, ethical dilemmas and personal repercussions she experienced during the pandemic in a conversation on June 24 with Stanford professor of law and of medicine Michelle Mello, ’93.

A man who was paralyzed below the neck after a spinal cord injury more than a decade ago was able to write again—with his mind—after Stanford researchers implanted two microchips into the part of the brain that controls hand movement. “This approach allowed a person with paralysis to compose sentences at speeds nearly comparable to those of able-bodied adults of the same age typing on a smartphone,” said Jaimie Henderson, professor of neurosurgery at Stanford.

Stanford researchers found that two-thirds of inmates in California prisons accepted a COVID-19 vaccine when offered, and half of those who had initially turned down vaccination later accepted it. Authors of the study say the finding is an important indication that vaccine hesitancy is not necessarily immutable.

What’s for dinner? Isaac Karachephone, chef for Stanford Hospital, shares his recipe for an immunity-boosting salad, and we’re drooling.

How many degrees away from space are you? Mechanical engineering professor Mark Cutkosky developed the “Gecko Gripper,” which has recently been attached to a free floating Astrobee robot on the International Space Station. Astrobee’s chief architect is Maria Bualat, ’87, whom you no doubt remember reading about in Stanford magazine. And testing all of this aboard the ISS is Kate Rubins, PhD ’06.