You had to bring your own frybread, but other traditions of Stanford Powwow—from honor songs to dance contests—were on proud display online last weekend as the annual event celebrated its 50th anniversary in virtual fashion. It was the second consecutive year the in-person event has been halted by the pandemic. The first Stanford Powwow took place in 1971, a time when the Indigenous undergrad population on campus had only just surpassed single digits. A half-century later, Powwow is the university’s largest annual multicultural event, a magnet for tribal performers from across North America and a proclamation of the vibrancy of Native life on campus. And its presence on campus is missed. “I don’t know if campus is going to be able to handle the turnout that we’re going to have for the next in-person Powwow,” says Constance Owl, ’18, a member of the Eastern Band of Cherokee Indians and a former co-chair of the event, in Stanford magazine. “It’s going to be huge.”

That’s gonna leave a mark. (Or maybe not.)

Scars have always been a fact of life, but in the future, they may not have to be. Researchers at the School of Medicine have identified a drug that—in mice—causes flesh wounds to heal with normal skin instead of scar tissue. The potential implications go well beyond the cosmetic. Scar tissue lacks hair follicles and sweat glands, and is weaker and less flexible than skin. It can limit motion and our ability to adapt to changing temperatures. In their experiments, the researchers found that wounds exposed to verteporfin, a drug approved by the U.S. Food and Drug Administration to treat an eye disease, healed without these drawbacks.

Your estimated time of delivery is . . .

Speaking of facts of life, it’s always been a mystery when a pregnant woman will go into labor (hometown pizzeria offerings and your grandma’s intuition notwithstanding). Any point between 37 and 42 weeks of pregnancy is considered normal.

Researchers at the School of Medicine have found a more precise way to predict labor onset—by analyzing blood samples taken from the expectant mother as her body readies for birth. They examined a host of biological markers, including increased factors needed for coagulation, which helps prevent blood loss after delivery. The researchers expect to have a test in the next few years that will enable doctors to predict the onset of labor in healthy pregnancies within a two-week window. The blood analysis findings may have other applications. “If we understand what’s regulating labor, we might be able to do a better job of inducing labor,” said co-author Virginia Winn, associate professor of obstetrics and gynecology.

State of the art. 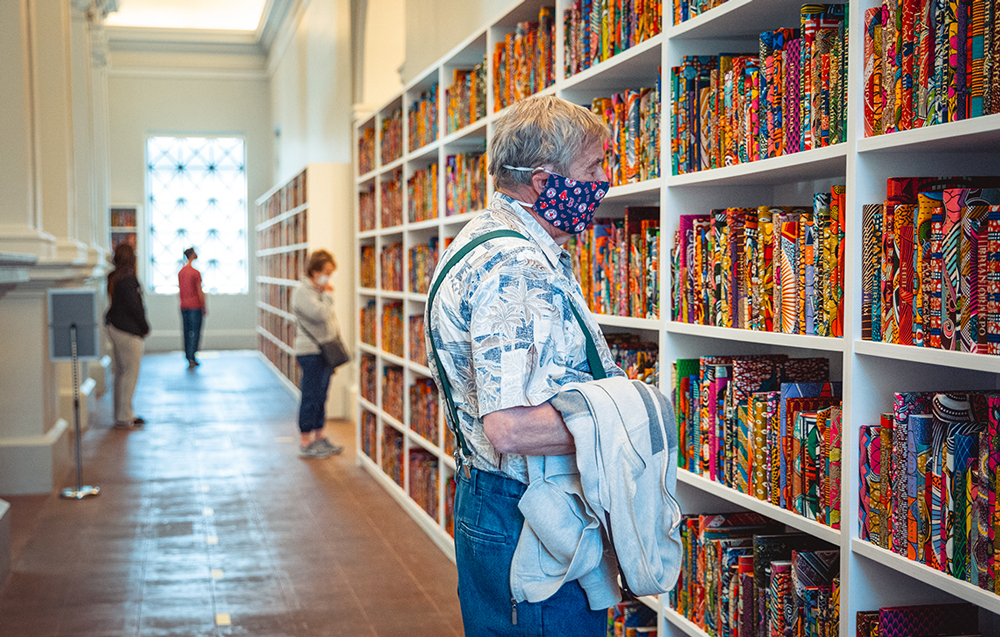 Cantor Arts Center is open for the first time in nearly 14 months. Above, a masked visitor stands in front of Yinka Shonibare’s The American Library, part of the temporary exhibition When Home Won’t Let You Stay: Migration Through Contemporary Art, on view through May 30, 2021.

The home of the future is too expensive to call home.

Silicon Valley likes to depict itself as the home of the future, says Stanford communication professor Fred Turner. But that claim becomes increasingly alarming on closer inspection of the inequality that permeates Bay Area life.

The disparity between wealth and struggle is at the heart of Turner’s new collaboration with photographer Mary Beth Meehan, Seeing Silicon Valley: Life Inside a Fraying America. The book offers an intimate look into the everyday lives of more than 30 Silicon Valley denizens, from some of its wealthiest residents to those barely getting by. That large lower rung includes Cristobal, an Army veteran who earns $21 per hour as a security guard at Facebook but who can only afford to live in a tiny backyard shed.

Turner hopes the project inspires new civic engagement about what future we really want. “How can we use the wealth we’ve built up to improve the lives of everyone in our region? That’s the question, I think.” Meehan and Turner will speak at a virtual Stanford event, Seeing Silicon Valley: Life Inside a Fraying America, on May 24.

Another completion for Quarterback U.

The Houston Texans’ selection of senior Davis Mills in the third round of the NFL draft adds to Stanford’s claim on the old nickname Quarterback U. All told, 24 Cardinal QBs have been picked in the history of the draft, the second-highest number of any school in the nation behind USC. (Stanford has had the most quarterbacks taken with the overall No. 1 pick in the draft. Three—Luck, Plunkett and Elway—are household names. Can you name the fourth?)

As COVID-19 sweeps through India, a new report addresses the impact of the pandemic there on people with chronic conditions.

How do we make law enforcement better and safer, particularly for communities of color? A report by the Stanford Criminal Justice Center and Stanford Center for Racial Justice, in partnership with the African American Mayors Association, includes ideas. “Innovative alternatives to traditional policing are happening right now, and those cities that are trying alternatives are experiencing less police-involved shootings and tremendous cost savings,” said law student Michelle Portillo, one of 12 researchers involved in the report.

“Where are the five stages of grief I was promised?” asks Andrew Tan, ’22, in a STANFORD essay about connection, loss and his grandmother.

Orange is the new blue. In a video from the New Yorker, Stanford biology professor Chris Field says “Orange Day” (last September 9, when the Bay Area awoke to an apocalyptic red glow caused by smoke and fog) was a “giant exclamation point” emphasizing the seriousness of changing climate conditions. “Climate change definitely causes more wildfires, more days when we have wildfires, more days when we have heavy smoke.”

Chemistry grad student Vince Pane will be on the new season of American Ninja Warrior, which begins airing on May 31. Check out his audition video.

Need some comedy? Gabe Miller, ’93, MA ’94, and Jonathan Green, ’95, are two of the masterminds behind NBC’s Superstore. They spoke with the Daily about their careers and the show, including its end this year.