The free exchange of ideas is at the core of Stanford’s values—but recent controversies over science, politics and speech have tested its limits. Some feel that the academy is becoming increasingly one-sided—one university’s economics department is liberal; another’s is conservative; these cardiologists think it’s all about cholesterol; those say eat the eggs. Stanford examines how the principle of academic freedom applies at a moment when the very notion of a fact is in question.

Hit me with your best shot.

One in four adults has a fear of needles, and that number is even higher in children. So when a shot stands between you and a post-pandemic lifestyle, what can you do to work through your phobia? Psychologist Jody Thomas, ’97, offers tips on managing your needle anxiety (or that of your child) through Hack the Vax. One pointer? Bring a buddy to tell you jokes or otherwise distract you during your appointment.

As if college life weren’t packed with enough things to do, three women worked on novels for young readers while they were undergrads, then got them published during a pandemic. Laura Robson, ’18, Christina Li, ’21, and Malavika Kannan, ’23, each wrote very different novels, but Stanford managed to find similarities. All three books, for example, have a strong female teen protagonist. And two feature the end of the world—or middle school, which is basically the same thing.

Aiming for an even younger crowd is senior Emma Rashes, who has written a children’s book with a health-related theme that combines her passions for educational equity, science and medicine. Lily the Llama Helps Her Herd was published in March, and, as the Stanford Daily reports, it encourages children and their families to get vaccinated against COVID-19.

And finally, when Rob Henslin stopped by Stanford Hospital in 2015, his former oncology nurses had a project in mind for him: writing a book to help children understand stem cell transplants. He certainly had the résumé for the job. Not only is Henslin a graphic designer and illustrator, but he’s also a leukemia survivor who received his own stem cell transplant at Stanford Hospital in 2009. The resulting book, Neutrophil’s Guide to Stem Cell Transplants for Kids, is being adopted by children’s hospitals around the country. Henslin spoke with Stanford Medicine’s Scope blog about the project.

We’ve got all our marbles. 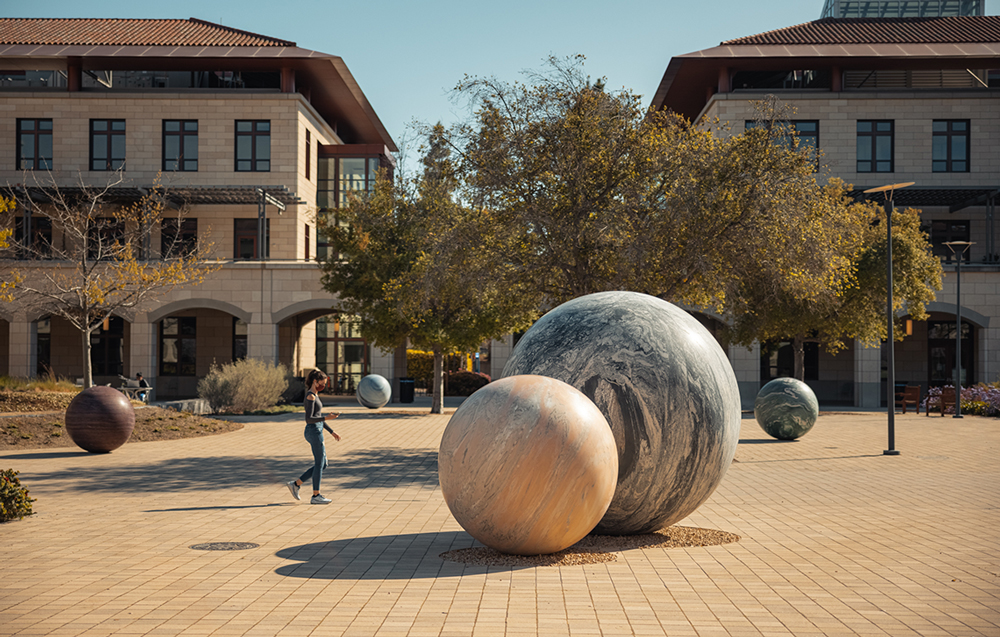 Twelve stone spheres now dot the Science and Engineering Quad. Artist Alicja Kwade determined the positions of the balls by throwing tiny replicas onto a model of the quad to see where they would land. Stone for Pars pro Toto was sourced from eight countries and made into orbs ranging from 16 to 98 inches in diameter.

A verdict and a vigil.

After the April 20 murder conviction of former Minneapolis police officer Derek Chauvin, members of the campus community gathered for a vigil in White Plaza to commemorate George Floyd. The conviction brought immense relief to many. Journalist Roy Johnson, ’78, called it “perhaps the most important verdict in our lifetime” in an opinion column for Alabama’s al.com. “Today, at least, we breathe,” he wrote. “Like George Floyd could not.” In Stanford Report, faculty experts in sociology, political science and law discuss what the verdict represents and how it will be seen as a test case for police accountability.

Two weeks after women’s basketball won its first NCAA title in 29 years, synchronized swimming and men’s gymnastics claimed national titles within hours of each other. For the gymnasts, the championship—Stanford’s second in a row—was a statement of the program’s continued ascension. For synchro, it was a chance to end on top, as the team is among 11 at Stanford that are set to be discontinued as varsity sports at the end of this academic year.

During shelter in place, computer science faculty members Chris Piech, ’10, MS ’11, PhD ’16, and Mehran Sahami, ’92, MS ’93, PhD ’99, reimagined the first half of Computer Science 106A as a new course that would stretch far beyond the Farm. The Code in Place initiative ended up teaching computer programming to 10,000 students in 120 countries, using 900 volunteer teachers (including Stanford students). “Most of the section leaders were not professional teachers, but programmers in the industry or advanced university students,” Piech told Stanford News Service. “They were learning the art form of teaching. And they were inspiring to their students.” In a paper for the ACM Technical Symposium on Computer Science Education, Piech, Sahami and their co-authors described the class as a “model built around a community that stresses learning for all, the importance of kindness and peer support.” A second round of Code in Place is currently being taught, everywhere.

Stanford will alter 2021 Commencement plans to include an in-person—though smaller—ceremony. And students are expected to be vaccinated before returning in the fall.

Zoom fatigue is worse for women, mostly because of the increase in “self-focused attention” triggered by the self view in videoconferencing.

Research by Maya Rossin-Slater, an associate professor of medicine and a SIEPR faculty fellow, shows that a taxpayer-funded paid family leave policy implemented in 2018 in New York did not hurt employers. In fact, similar policies made it easier for employers to deal with lengthy employee absences, at least in the short term.

For two decades, Steve Easton, JD ’83, and his son chased the Cardinal, hoping to witness a championship win. Finally, the women’s basketball team brought their journey to a happy end.

In an episode of the Stanford Pathfinders podcast, Nate Klemp, ’01, MA ’02, and Kaley Warner Klemp, ’01, MA ’01, discuss a path toward greater connection and intimacy in the modern relationship. The bestselling authors and relationship coaches tossed out the old “50/50” fairness ratio and created the “80/80” model, asserting that when both people give 80 percent, balancing career, family and love becomes a more satisfying journey.

Stanford researchers have identified the mechanism that causes scars to form in skin, and demonstrated (in mice) a way to make wounds heal without scar tissue.

Reentry anxiety; are we adults yet?; undergrad housing changes