WOOP, there it is.

It’s difficult to set goals when you don’t know what life will look like in a couple of months. Or when you’re afraid life will look exactly the same in two months. But Laura Bunch of Stanford Graduate School of Business’s Career Management Center says planning for your future is a great thing to do for yourself right now. “Grounding yourself in your values and your vision is actually a powerful way to navigate uncertainty,” she told the GSB’s Insights. Rather than focus on an outcome, Bunch says, ask yourself what you value and how you’re currently honoring those values. If there’s a value you’re not doing much about, you’ve just found your starting point. And when you encounter an obstacle, the WOOP visualization technique can help: State a wish, a desired outcome, an obstacle and a plan.

Say you value compassion and the obstacle is how to demonstrate it when you no longer have your royal patronages. Do like Meghan and Harry and visualize partnering up with a world-renowned academic. The Duke and Duchess of Sussex are working with James Doty, a Stanford neurosurgeon and an expert in the science of compassion, through their new Archewell Foundation. The foundation aims to bring about “systemic cultural change” through acts that alleviate the suffering of others. Doty explained to the Mercury News how performing acts of compassion and cooperation not only helps others but also causes your own brain to produce oxytocin (the “love hormone”). Win-win.

But not all good deeds need fit into a new season of The Crown. At Stanford Hospital, where visitors are limited to reduce the spread of COVID-19, critical care fellow Ricky Hansra reserves a couple of hours every day to call family members of each of his patients. Building a relationship with them helps when he needs to share difficult news, and it reduces the anxiety of patients and their families. Most of all, the information he gleans allows him to take small actions that have big meaning, like bringing a COVID-19 patient a Spanish-language Bible and newspaper. “Getting a patient the Bible might seem like a small gesture,” he told the School of Medicine’s Scope blog, “but it made such a big difference to me, as a provider, and to him, that it was better than the medical treatment that we administered that day.” For what it’s worth, Dr. Hansra, we think Oprah should interview you next.

Putting the spotlight on anti-Asian racism.

Following the Atlanta shooting deaths of six women of Asian descent last week, Stanford president Marc Tessier-Lavigne issued a statement to the university’s Asian, Asian American and Pacific Islander communities. “You are an essential part of our Stanford family, and we stand with you in your grief and alarm over the recent attacks, and against the racist acts that are on the rise,” he says. The Asian American Activities Center offered resources to the community.

Law professor Shirin Sinnar, JD ’03, an expert in national security law, civil rights and liberties, and civil procedure, has conducted research on assessing alternative approaches to hate crimes. She spoke with Stanford Law School about the increase of hate crimes against Asians (in major U.S. cities in 2020, they surged to 149 percent of the previous annual total), the effects of those crimes, and what can be done to reduce them and support Asian communities. And in a March 5 essay for NBC’s Think newsletter, Xiao Wang, ’07, MS ’07, co-founder and CEO of Boundless Immigration, wrote about historical and current anti-Asian sentiment, racism and violence in the United States. Asian Americans have been too silent, Wang says, prioritizing “fitting in” at a high cost. “Unfortunately, by prioritizing outward success, Asian Americans like me ignored an equally important imperative: to stand up for ourselves, our history and our rights,” says Wang. “The real-world violence engulfing our community today is proof that the time has come to change that dark inheritance.” 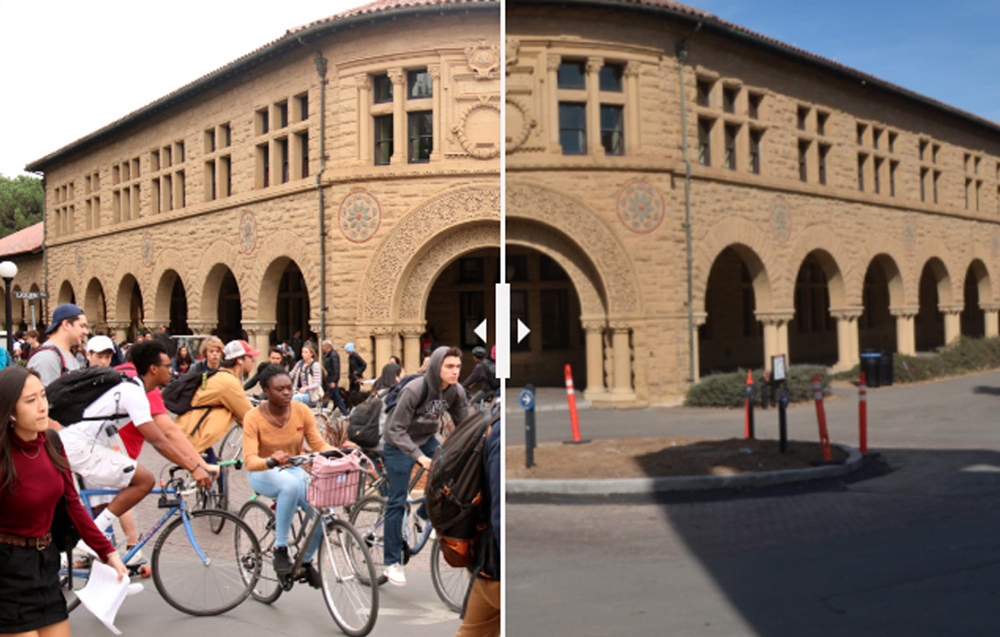 Daily staff sifted through photos they took in March 2020 (like this composite image on the left) and then revisited the sites to document them one year later. The result is kind of depressing, but the fun of using photo sliders almost makes up for it. While some undergrads have been on campus this academic year, all juniors and seniors will be welcomed back to campus starting March 24, more than a year after they left. University leaders said last week that efforts to fully reopen campus will take time.

The postmaster general is reportedly days away from a new plan that promises to solve long-standing financial problems and hit the reboot button on timely delivery. All just in time for USPS shorts season. But how did we get here? Historian Cameron Blevins, PhD ’15, maps out the wild and unusual expansion of the USPS, explaining its past so we can make decisions about its future.

Antonio Milane, a prospective student who has cerebral palsy and relies on a scribe to complete homework as well as coursework, was frustrated about the answers about accommodations he was getting from the universities to which he had applied, including Stanford, his dream school. (College students whose disabilities limit their ability to write do usually receive accommodations such as a student notetaker in class and a scribe for classroom activities like labs. Stanford did offer these services, but did not offer to fund a scribe for homework.) His social media posts on the topic went viral. After a petition calling on Stanford to provide Milane with a scribe for all coursework and homework went viral and the ASSU passed a resolution calling for expanded scribing services for students with disabilities, the university committed to “making sure Mr. Milane has what he needs to be successful here, including providing him with any scribe services he needs.” Stanford also announced that a study group and task force will consider best practices for disability access. As for Milane himself, he has committed to the Class of ’25.

Tilly Griffiths, a junior who relies on personal-care attendants 24/7, explained in the Daily the legal obligations of U.S. universities (which do not include funding so-called personal services, including scribes), as well as her belief that the responsibility for improving access is much broader. “Focusing too heavily on institutions of higher education and their obligations to disabled students privileges those who have chosen an academic pathway,” she says, “and I do not believe that the option to live independently should be so intrinsically tied to achievement in traditional educational environments.” And Nicholas Midler, a senior, both applauded Stanford’s decision to provide more aid to Milane and cautioned Daily readers about the influence of social media in such situations. “It speaks to the danger of letting crowds of temporarily interested observers shape decision making,” he writes, “because such crowds lack the expertise that comes from attending meetings, answering emails and fulfilling the other quotidian obligations routinely performed by the scores of university officials who manage the budget and allocate resources.”

Ten years after an earthquake and a tsunami caused the Fukushima nuclear disaster, Stanford experts share what we’ve learned about radiation, earthquake science and more.

Liam McGregor, ’19, thought up the Marriage Pact for an econ class. A recent episode of the Planet Money podcast breaks down how matching markets work (think organ donations) and how the Marriage Pact spiced up economics algorithms. Also, (name dropping in 3, 2, 1) how economics professor and Nobel Prize winner Paul Milgrom, MS ’78, PhD ’79, met his wife.

Wind generation actually picks up during cold snaps. Mark Jacobson, ’87, MS ’88, professor of civil and environmental engineering and senior fellow at the Stanford Woods Institute for the Environment, on how renewable energy from wind could get us through cold-weather crises.

An expanded child allowance similar to Sen. Mitt Romney’s Family Security Act is included in the new stimulus bill. In the Stanford Review, senior Benjamin Esposito writes about conservative values and why Republicans should support efforts to put family over work.

Maybe you’re just glad scientists quickly created COVID-19 vaccines. But if you are curious how science got there, bioengineer Markus Covert will walk you through the 300-year history of vaccine science.

Mickey Wright, ’56, is considered to be among the best golfers in history. After her death in 2020, hundreds of her personal artifacts and mementos were donated to the USGA Golf Museum, giving new insight into her story.

If your kids are playing on their own or otherwise on task, leave them alone. Education professor Jelena Obradović says stepping in with suggestions or instructions can make it harder for kids to regulate their behavior at other times. Plus, this is obviously your chance to dip into your secret stash of chocolate. Don’t screw it up.

Take a Zoom fatigue survey; pandemic alcohol and drug use; why we text people in the next room